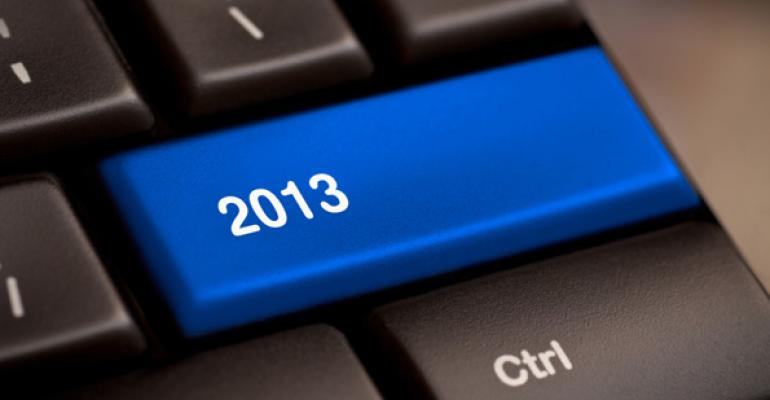 Tech Resolutions to Consider for 2013

Let's think differently about tech in 2013

When you love this stuff as much as I do, technology is both the journey and the reward. But in deference to the needs of readers, who hopefully aren’t sitting in a “Sanford and Son”-like disaster like that in my office, I try to preach pragmatism. And taking stock of my own regularly-used technologies, I’m ready to make some changes again in 2013. Here are a few you might consider for yourself.

You can chalk up this advice to a lazy, end-of-year mentality, I guess. But I do think of each New Year as a chance to better oneself, and while I won’t bore you with my personal goals for next year, I do have thoughts about number of overdue tech-related changes too.

We all have multiple accounts with multiple online services and web sites, but with rare exception, most people simply use the same password, or simple variants of the same password, at each of these sites. There are lots of password strategies, of course, but this is perhaps the most important area to revisit at the start of the New Year. At the very least, take the time to change every single one of your passwords, and ensure you’re not opening yourself up to a horrific cross-service identity attack by using a different password at each site and service. Obviously, that can be hugely problematic, so I recommend using a password management system like LastPass which also provides an automated strong password generator. And for central accounts, like your Microsoft or Google account, be sure to take advantage of their heightened security settings. For example, Microsoft has security proofs and Google uses two-factor authentication, both of which work similarly and help prevent your account from being seized by malicious hackers.

Like some of you, I subscribe to a bewildering array of services, and like many of you, perhaps, I’ve lost track of some of them. There are digital subscription services like Xbox Music Pass, Xbox LIVE Gold, Spotify, and the like, cloud storage services such as SkyDrive, CrashPlan, Dropbox, and so on, digital periodical subscriptions on Kindle, Google Play, and others, Netflix DVD and digital plans, and much, much more. My wife handles the finances, so I’ve asked her for a review of the regular monthly bills to our debit card with an eye towards evaluating which of these services we really do need or use. I suspect there will be at least a few—like an out of date Amazon S3 photo backup I’ve never accessed—that can be cancelled. Subscription services can be wonderful, of course, but they can also be financial death by a thousand tiny cuts.

I’ll be writing a series of articles about this topic in the coming weeks, but my tech-related New Year resolution for 2013 is to reduce my need for local storage to an absolute minimum—a move I sort of think of as “zero data”—and place as much of my data—which includes documents, music, video, and photos—in the cloud as is possible, reducing my need for local, redundant, and easily failed hard disk storage. Your ability to do this will of course vary based on a number of factors, and you do need to be careful about adopting the right strategy. But I think technically inclined people tend to overthink things like this, and I’m going to move to eliminate the multiple terabytes of data I’m currently using. It’s time to let go.

People often ask me to recommend the perfect Windows 8 laptop or similar, and while you’d think this would be fairly straightforward with all the hardware I use and test, it’s not. Everyone has specific wants and needs, and uses computers—or, increasingly, non-PC computing devices like tablets—differently. So all I can really tell you is what the perfect computer is for me, and even that is something that changes as time marches forward. And Windows 8 has curiously made this problem even more pronounced, not just because of its emphasis on multi-touch but because of an amazing variety of new form factors.

With this in mind, I do have a few thoughts and bits of advice about new hardware device purchases in the coming year.

Wait. To say that the initial round of Windows 8 PCs and devices is underwhelming is simplistic but fair. Complicating matters is the stunning range of different form factors, which makes picking a type of PC/device, let alone a particular model, difficult. So unless you really, really need to buy right now for some reason, just wait. The market will improve with better PCs and devices and as reviewers gain a better appreciation for the different device types, good advice about which make sense in which situations will emerge.

PC vs. tablet. A couple of general statements about the PC/tablet debate, which will evolve as do these device types. PCs are for work and tablets are for play (unless your needs are very simple in which case a tablet may be able to do it all). PCs are PCs, but tablets are usually companion devices. PCs are long-term investments and tablets are (comparatively) disposable. Don’t spend too much on either. Buy into ecosystems, not particular devices. This is all very pat and general, and by design. It’s a big topic, and many will disagree with a lot of that.

And, of course hybrid devices are the proverbial wrench in the works. I do think that hybrid PCs—tablets that can dock to a desktop setup, perhaps, or tablets with keyboard bases-represent the future of computing, and that these designs will be the perfect hardware match to the similarly bipolar Windows 8 software, giving users a single device that can do it all. I have yet to see a device like this that I can recommend near universally, however. They’ll come.

Get multi-touch. This advice will only be controversial with those who have never used such a machine: The next PC you buy, even if it’s a traditional all-in-one desktop, Ultrabook, or whatever, should include multi-touch capabilities. Period. You may not think you want it, and you may not believe you’ll ever use it. You’re wrong on both counts.

Skip ARM and Windows RT for now. Now that the excitement over Microsoft’s port of Windows 8 to the ARM architecture has settled down and we truly understand the compromise that Windows RT represents, my advice is simple: If you really want a Windows 8 tablet for some reason, get Windows 8, not Windows RT. A Windows 8 tablet running the Intel Atom “Clover Trail” chipset offers every single advantage of Windows RT with none of the compatibility downsides. And future Intel chipsets will ramp up the processing power to the point where ARM will be viewed as an interesting experiment that helped spur mainstream PCs forward. Or not. But as for today, there is no place for ARM devices in the Windows world in my opinion. I’ll be watching this one closely going forward, of course.

By the way, my perfect PC doesn’t exist: It would be a 15-inch version of the new, multi-touch-enabled Lenovo ThinkPad Carbon X1 Touch. I can dream.