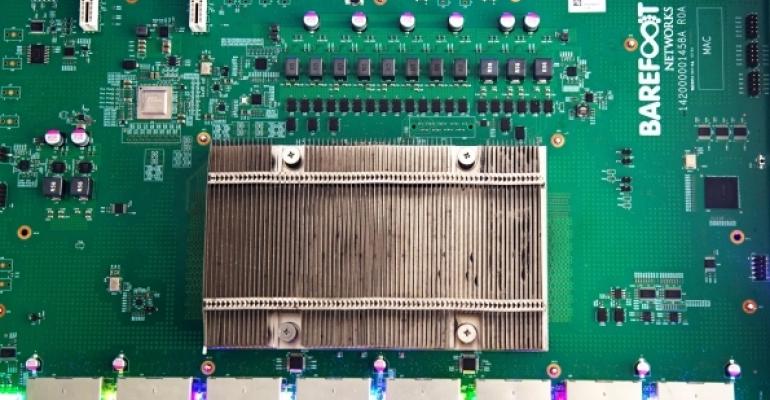 Barefoot Networks is building a new kind of customizable chip for the ubiquitous equipment that companies use to send data between computers.

(Bloomberg) -- For nearly two decades, venture capitalists in Silicon Valley have been losing interest in the technology that gave the area its name. One startup is convincing them to take another look at silicon.

The brightest star in this long-neglected segment of the tech market is Barefoot Networks Inc. It’s building a new kind of customizable chip for the ubiquitous equipment that companies use to send data between computers. In less than four years, Barefoot has pulled in about $155 million of funding from the biggest names in the Valley, Wall Street and China.

While that’s a lot for a young business, it’s barely a start in the world of high-end semiconductors. And the costs are “exponentially growing,” Hock Tan, chief executive officer of chipmaker Broadcom Ltd., said on a conference call with investors last month. Broadcom, which dominates the market Barefoot is trying to enter, spent $2.7 billion on research and development last year. That’s a fraction of the $12.7 billion Intel Corp. invested in future products.

Barefoot is banking on a seasoned executive from Google and Qualcomm Inc. to help the startup break into a $50 billion industry. Craig Barratt, who was appointed CEO of Barefoot in February, acknowledged the odds are against him if it comes down to spending power. “It’s a huge amount, and it’s a scary thing for a startup,” he said. “It’s the sport of kings.”

After the dot-com bubble burst, Silicon Valley has retreated from funding startups that produce semiconductors. In 2000, U.S. venture capital firms invested $1 billion in privately held chipmakers. Spending on semiconductor startups this year is headed for a record low, with $154 million invested so far, according to research firm PitchBook Data Inc. The pullback has come because the costs of designing and manufacturing chips has skyrocketed, allowing a few large companies to dominate.

For Barratt, 55, the venture is a return to his roots. After graduating with electrical engineering degrees from Stanford University, he went to work in the late 1990s at Atheros Communications, a chipmaker founded by other Stanford grads. He rose to become president and CEO before selling the company to Qualcomm in 2011. Barratt—not to be confused with Craig Barrett, the former head of Intel—went on to oversee the expansion of Google Fiber before Alphabet pulled back from its costly broadband endeavor.

Barefoot’s plan is as ambitious technically as it is financially. Its chip contains 11 billion transistors and is made with the same kind of sophisticated production techniques used by Intel, the world’s largest chipmaker. Barefoot promises to resolve limitations associated with switches, the machines that direct the flow of information between computers.

AT&T Inc. has already tested Barefoot products, sending data between Washington and San Francisco. The startup said its chip is as fast as anything available from larger suppliers and has the unique ability to be programmed using software to imbue additional functions without waiting for a new chip to be released. Typically, Cisco Systems Inc. and other switch makers must wait for Broadcom to release an updated chip each year, providing them with the basis to upgrade their boxes.

But the industry is moving toward customization. An alliance known as P4, which includes AT&T, Google and Tencent, is investing in a computer language that will help companies develop ways to make switches more secure or avoid getting overloaded. Currently, diagnosing what’s going on inside a network as it’s happening is largely impossible.

Cisco suggested it may look at Barefoot as a potential supplier, though the company declined to comment further, saying it doesn’t discuss products before they’re announced. “We are in a unique position to take advantage of these new technologies,” said Ish Limkakeng, a Cisco vice president.

With chip investment on a prolonged decline, VCs have been apt to take smaller gambles on new markets around the edges. For example, startups specializing in designing chips for artificial intelligence software, such as Cerebras Systems Inc. and the U.K.’s Graphcore Ltd., are raising some cash. The only other private semiconductor company besides Barefoot to come out of the Valley since the internet bubble and achieve prominence is Aquantia Corp. The startup has raised $204 million from Cisco, Intel’s venture capital arm and some lesser-known investors, according to PitchBook. Barefoot took in almost as much in about a third of the time.

The part of the semiconductor market Barefoot is going after can yield big rewards. Broadcom’s Tomahawk chip, which is the industry standard, sells for as much as $3,400 apiece.

Even at those prices, Barratt knows the economics of the chip industry make it tough to stay independent. Just before he sold Atheros to Qualcomm in 2011, analysts were predicting that the company would generate more than $100 million in profit on $1 billion in sales that year.

The acquisition, valued at $2.9 billion, helped launch a multi-year consolidation effort that has concentrated almost 60 percent of market share in the hands of 10 companies. Barratt said it costs as much to simply design a chip today as it did to build and equip an entire factory 20 years ago.