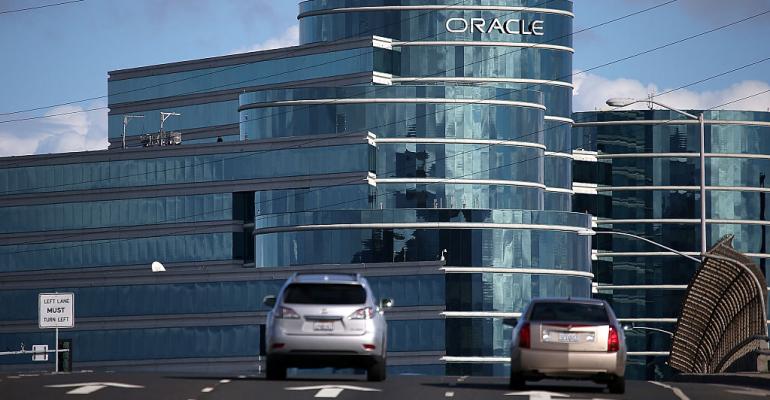 Oracle Shares Drop After Cloud Sales Fall Short for Some

(Bloomberg) --Oracle Corp. reported quarterly cloud-computing sales that missed some analysts’ estimates, a setback in the company’s effort to remake itself around internet-based products. Shares fell in extended trading.

Cloud revenue in the period ended Nov. 30 gained 44 percent to $1.52 billion, Oracle said Thursday in a statement. John DiFucci, an analyst at Jefferies, was among those who projected stronger growth in Oracle’s cloud sales, with his estimate of $1.55 billion. The company also gave a disappointing forecast for profit and cloud growth in the current period.

Oracle, a mainstay of traditional corporate computing software, is fighting to catch up in the newer cloud market with established leaders including Amazon.com Inc. and Microsoft Corp. The company has been hiring engineers to build products that let customers rent software and computing power from Oracle, and adding sales reps to transition businesses to the new offerings. The Redwood City, California-based company has also been making acquisitions like last year’s $9 billion purchase of NetSuite Inc. to add cloud clients and programs.

“They’re late to that whole cloud battle,” said Patrick Walravens, an analyst at JMP Securities. “A lot of people already have a solution they are happy with. The question is what does Oracle bring the table?”

Oracle shares declined as much as 7.3 percent in extended trading after the report. Investors had been encouraged by the company’s move to cloud-based software this year, sending the shares up 31 percent. They closed at $50.19 Thursday in New York.

The company projected revenue growth from the internet-based products and services to be 21 percent to 25 percent in the fiscal third quarter. Profit, excluding some costs, will be 68 cents to 70 cents a share, below the average analyst estimate of 72 cents, according to data compiled by Bloomberg. The forecast doesn’t take into account currency fluctuations that could boost profit as much as 3 cents a share, Co-Chief Executive Officer Safra Catz said on a call with analysts.

At the same time, Oracle continues to sell traditional database and corporate programs that customers run on site. Revenue generated by new software licenses, a measure that’s tied to those products, was little changed in the fiscal second quarter from a year earlier. That compares with a drop of 6.2 percent in the prior period.

The company reported adjusted revenue rose 6.5 percent to $9.62 billion in the quarter. Profit, excluding some items, was 70 cents a share.