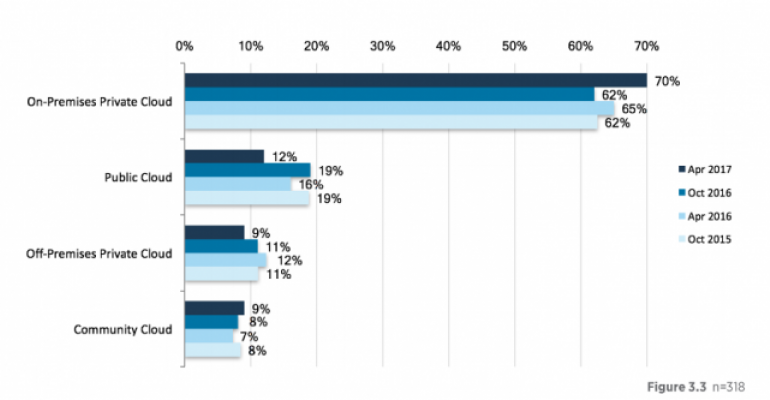 Although there might be something of a red flag in user satisfaction, the platform continues to dominate the private cloud.

A look at the numbers released last week by the OpenStack Foundation from its ninth user survey should be of interest to anyone considering the platform as part of a cloud solution. The platform's percentage of the overall cloud market remains level, at about two-thirds of the total clouds in deployment. That in itself represents a large increase in total deployments, as cloud use continues to rise. Add to that a rapid increase in proof-of-concept and test use, and it's clear that OpenStack's place in the cloud continues to strengthen.

The actual number of OpenStack deployments is an unknown, but the foundation's snapshot, taken from a sampling of 2,561 users -- up from 1,533 participants in the last survey -- gives us a pretty good picture of current use metrics. A large majority of those taking the survey identified themselves as either "cloud architect" or "cloud operator or sysadmin."

According to the survey, the majority of organizations using OpenStack are in the Information Technology field (56 percent), followed in order by telecommunications, academic/research, finance, retail/e-commerce, manufacturing/industrial, and government/defense. Nine percent of users fall into an "other" category, which includes consulting, real estate, web hosting, software and hardware, news, entertainment and advertising.

"[I]nfrastructure providers made up 16% of the total IT companies," the foundation explains in its analysis of the survey, "followed by private cloud providers and consulting/professional services, each with 13%. Systems integrators, public/hosted cloud-service providers, DevOps consulting/delivery, and data centers/co-location services rounded out the most prevalent IT categories, each with 9%."

The metrics on the size of the organizations using OpenStack are particularly interesting. Here, press reports have focused on the numbers starting with the largest organizations (those with over 100,000 employees at 16 percent} to the second smallest (small businesses with 10-99 employees at 15 percent). However, the relatively large number from the smallest category (companies with less than 10 employees at 10 percent) might be most revealing, considering the platform still has a reputation for being difficult to deploy and use.

User satisfaction is something of a mixed bag. Using the the Net Promoter Score (NPS) framework to measure user satisfaction, the score dropped this year to 24, after reaching a high last October of 36. However, when older deployments are removed from the picture and only deployments made in 2016 and 2017 are considered, satisfaction increases dramatically, with scores between 35 and 38.

Interestingly, two of the more recent OpenStack releases, Mitaka and Newton, scored poorly, which prompted the foundation to point out that "deployments made in 2016/2017 are not necessarily using the latest releases (Mitaka and Newton)."

The vast majority of OpenStack deployments, 70 percent, are at on-premises private clouds, with public cloud deployment at only 12 percent. This perhaps indicates a trend away from reliance on public clouds. In October, the public cloud figure was considerably higher, at 19 percent, with on-premises use at 62 percent.

Sponsor Content
Why Native Security Controls in Public Clouds Are Not Enough
Oct 05, 2021