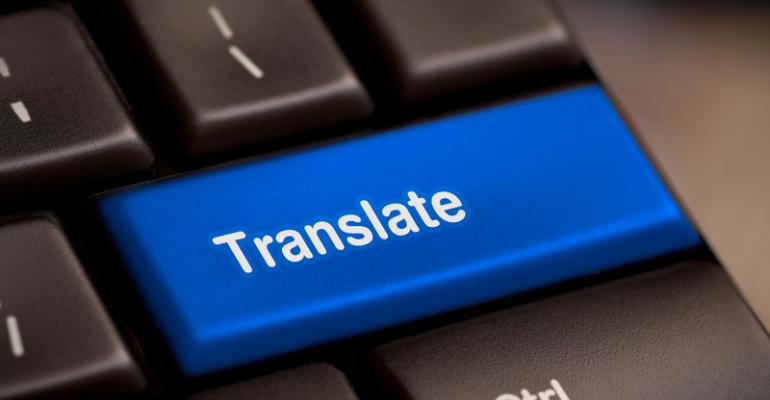 Not to be Outdone, SpeechTrans to Demonstrate Google Glass Translator in June at HP Discover

It looks like Microsoft beat someone to the punch with the recent unveiling of Skype Translator at the Re/code conference. And, this may be the first time in a long time that Microsoft has been able to trump competitors with a technology reveal.

However, not necessarily a competitor, SpeechTrans is reported to have been doing real-time translation for years already and based on communications today is wanting to remind us that the company's product is touted as the "world's most advanced translator."

SpeechTrans is a Microsoft Managed Partner and provider and utilizes Microsoft Azure to enable real-time translation service. The SpeechTrans offering already supports Windows Phone, iOS, Android, Blackberry or a Windows 8.1 device or a desktop operating system. The company recently released Remote Mic, which is the world’s first API that lets users speak into any telephone and types what is said in real time on the screen for either translation or dictation in seconds.

The term "competition" in today's industry seems to be under continual refinement, but SpeechTrans seems a bit miffed by Microsoft's unveiling of Skype Translator. The company is hitting the wires today to ensure its known that SpeechTrans also works with HP (whatever that means), and will be demonstrating their own real-time conference translator for Google Glass at HP Discover in June 2014.

At the same time, the company has offered a press release today, praising performance gains and automatic Cloud storage for dictations and translations using Microsoft Azure. It's a strange world.

As a Microsoft Managed Partner, SpeechTrans has also worked closely with Microsoft Developer and Platform Evangelism teams to optimize the functionality and design of SpeechTrans products on Windows devices.  SpeechTrans uses Microsoft Azure services to deliver a highly scalable system that offers all users the advantage of a global cloud platform.

"We are thrilled with our migration to Microsoft Azure, and we look forward to adding Azure Mobile Services in the near future.  Microsoft's Azure architecture will allow us to deliver better service to end users at a better price point," said John Frei, CEO of SpeechTrans. "The automatic cloud storage for dictations and translations is just the beginning of our effort to sync SpeechTrans across devices. In the near future, if someone uses a Windows Phone, iOS, Android, Blackberry or a Windows 8.1 device or a desktop operating systems, we want SpeechTrans to automatically sync on each device so users can see their results regardless of where they were created— storing user's results in Microsoft Azure will allow us to do this."

"Using Microsoft Azure's open, flexible and globally scalable platform, SpeechTrans is able to deliver advanced mobile capability to its worldwide customers," said Vibhor Kapoor, Director Product Marketing, Microsoft Azure. "We are excited to see the innovation and benefits that SpeechTrans Ultimate's translation and dictation capabilities will bring to its customers."

With new updates to SpeechTrans Ultimate for Windows 8.1, users can now enjoy real-time text and voice translation over chat, speech-to-speech translation over video, dictation and instant messaging on Facebook, Google Talk, Yahoo! and AIM. By using Microsoft Azure, SpeechTrans will be able to make these translation services significantly faster.