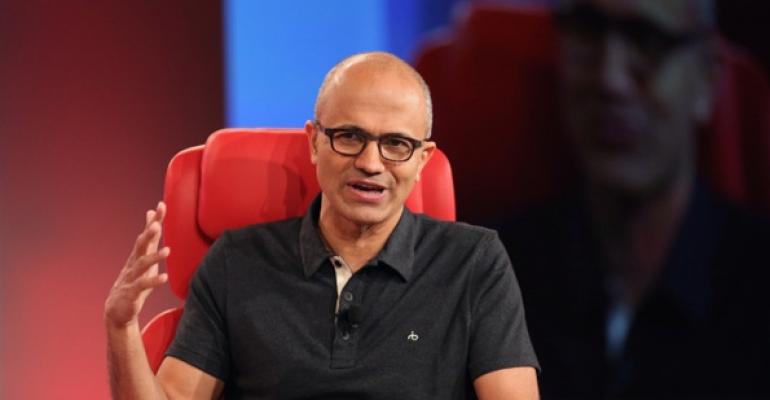 One of the things that struck me watching today's Ignite keynote announcement was what wasn't said, at least not immediately: That Microsoft is a mobile-first, cloud-first company.

The company still definitely is: They boasted that they're one of the biggest app publishers on Android and iOS and showcased endless datapoints showing Azure's successes, including noting that it now has 34 regions, twice the number of AWS.

In fact, as my colleague at SuperSite noted, it was a non-Microsoft speaker that first used the phrase.

Instead, Microsoft executives oriented their sessions around three key areas: Security, intelligence, and productivity. And while that's not as catchy or as clear as Satya Nadella's mobile-first, cloud-first manifesto that has guided much of Microsoft's reinvention the past few years, I think it could be even more profound when it takes shape.

Security is a no-brainer: The industry is beyond a mess when it comes to keeping data safe and secure, and Microsoft's push to the cloud benefits from their unique credibility with both IT departments and consumers, and Microsoft has obviously chosen Windows 10 and Office 365 as an opportunity to be both more aggressive in pushing security updates and best practices along with getting organizations more comfortable with the cloud (there was a oddly moving video mid-keynote where an IT professional said that moving to cloud was what finally earned him his company's respect.)

Take, for example, the new PowerPoint feature QuickStarter. Soon, instead of sorting through templates or stressing over an original design, Microsoft lets users type in a few words, and then it creates a bare-bones template populated with Creative Common images, suggested key points, and a carefully paced flow, all pulled together through an automated process with an end-product that would put the average office presentation to shame.

That kind of product requires a wide-array of expertise, the right productivity software, and a lot of data, all of which Microsoft has a very good claim over at the moment. It takes the promise of the current wave of digital assistants, but then does something genuinely useful beyond being a new interface.

(I wouldn't be surprised if, in a year or two, you can use Cortana to start or even pull together that entire presentation, but it all comes back to Microsoft building off homegrown advantages that let its products actually do the work.)

Microsoft whiffed on mobile, and I think the company has done a lot of great work trying to make up for that. But more importantly, they're now clearly focused on what's next beyond mobile, and all signs point to a strong head start.

Microsoft next platform bet: Bot assistants that know all about you and your business
Apr 05, 2016