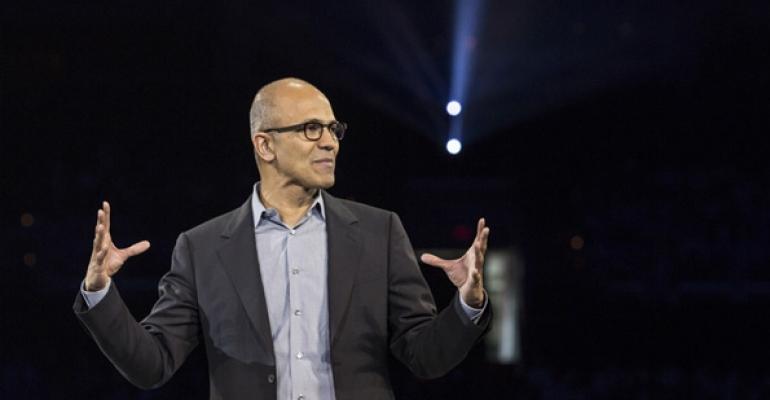 Microsoft: Cloud is My Business. And, Business is Good.

Microsoft’s public events over the past couple years – particularly those for Windows 10 and self-designed hardware devices – I think have really clouded (pun intended) the minds of some of its biggest customers, but definitely has lured many consumers away from the company’s real mission. Whether or not this has been on purpose, with its Windows 10 and Surface events Microsoft continues to promote itself as a consumer-friendly company, yet its recent revenue report shows a much different picture and a much different underlying focus.

I agree with most, that Microsoft has developed some extremely popular and well-designed devices in its Surface line. I use a Surface Pro 4 as my daily driver and am constantly on Surface-watch during my favorite TV shows. There was a time when the only computer shown on TV and in movies were from Apple. But, that has taken a 180 degree turn in the last year. It’s now rare not to see a Surface device on a TV show. But, still despite that…Microsoft is not a hardware company. Gasp! What?

Even though I’m one of those people that got caught and bit by the Microsoft Band, that was on me. I succumbed to the flash, glamor, and P.T. Barnum-like promotion and I feel a bit ashamed for it. But, I’m not the only one that has gotten caught up in flashing lights, jazz hands, and watching TV shows for Surface sightings. I’m not the only one distracted from Microsoft’s true mission from time-to-time.

So, I think it’s good for us to remember that, before Satya Nadella became Microsoft’s CEO he was the Vice President of Microsoft's cloud and enterprise group. At the time, when Nadella became the clear front-runner for the position, it was pretty much a given what Microsoft’s future would be. In many ways, it was like picking a presidential candidate. Candidates are chosen based on their platform. Those in the running and rumored to be in the running for the company’s top position all had specific focuses – all had different platforms. And, it was from this group that Microsoft’s future direction was born. Nadella’s selection was no different than a presidential candidate and should have given everyone deep insight into what Microsoft’s future would look like. Look at what Microsoft produces – even on the hardware side – there is always a path to the cloud. And, if not – it won’t exist for very long.

For example, take a look at the current state of Microsoft hardware. The company has been reluctant in giving any information about an upcoming Surface Book 2 or Surface Pro 5. Why? Microsoft has stated many times that it will build hardware where it believes new categories of hardware need to exist. Why would it need to exist in those areas? Because Microsoft needs hardware on which to run its software that directs customers to the cloud.

Since developing the Surface line of devices, many of its hardware partners have assumed control over those new categories of devices. So, if a partner is willing to fill the gap and generate hardware that runs Microsoft software, why would Microsoft need to put effort behind creating its own? It wouldn’t.

And, that’s not a bad thing at all considering Microsoft’s revenue reporting. Microsoft just posted $12 billion in commercial cloud annualized revenue run rate and stated that its on track to hit its goal of $20 billion in fiscal year 2018. It’s worth noting that the company has never stated a hardware goal.

So, I think it’s important sometimes for a gut check to realize the endgame – sometimes just for sanity’s sake. Customers tend to get so hung up on what they perceive as Microsoft failures – like Windows Phone or the Microsoft Band – when these weren’t completely failures at all. Microsoft may have missed the boat on smartphones, but it now has a mobile operating system that is ready for the next wave of the mobile industry. Microsoft may have shown its inability to create durable wearables, but the company developed some awesome backend services and sensor technology that it has now licensed to Casio. So, not exactly failures – but definitely not technologies that, in the end, could feed the cloud business.

I love my Surface Pro 4 and you’ll only be able to get it from me by prying it from my cold, dead hands. I’ll still enjoy pointing at my TV screen during The Flash or APB and excitingly telling my wife I just saw a Surface device. Despite things like the Zune, the Kin, and the Microsoft Band only existing now in fond memories, next year, when Microsoft hits that $20 billion goal (and, it will), I’ll congratulate the company on a job well done – and hopefully have spent less of my own money on its hardware distractions.