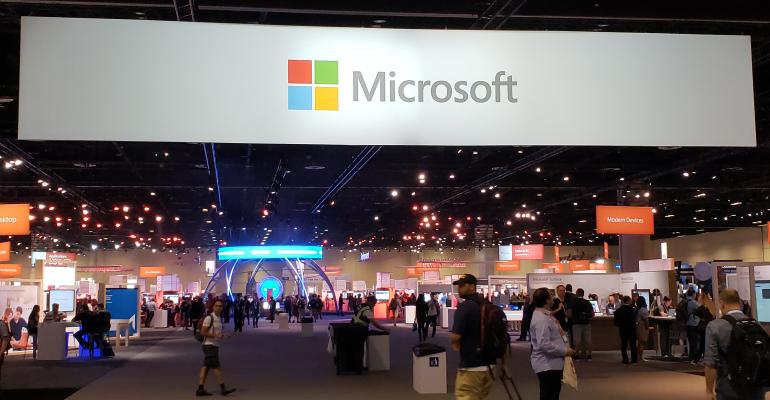 ITPro Today: What You Need to Know From Microsoft Ignite

Here is a roundup of ITPro Today's news and analysis, from information about Microsoft's bulked-out data infrastructure offerings to its comprehensive security products. We also looked at how the company's commitment to the post-PC workplace affects IT operations.

Our team has been covering the event all week long, so here's a look at our coverage. The subjects and how they are covered say a lot about the direction Microsoft as a company is taking with their products and services.

Start with a new narrative from Microsoft that points towards the age of desktop computing and cohesive application suites coming to an end. Some of the key areas identified to support this analysis include:

Windows will continue to be a key aspect of this move, but the emphasis is no longer on the desktop operating system. The capabilities of mobile apps have advanced so much over the last few years that getting work and collaborating with your team using a smartphone is very productive these days. This week, Microsoft announced further advancements in this area with their Office mobile apps on iOS and Android plus new capabilities in the OneDrive app on those same platforms.

Microsoft is also investing in your opportunities as IT professionals to become even more proficient in the companies cloud services with a new Microsoft Learn program and role-based certifications. Through this free program, with more than 80 hours of available training, you can pursue Microsoft Certifications as an Azure Solutions Architect, Azure Administrator, and an Azure Developer. I spoke with one of the team members who help prepare this program for its debut here at Microsoft Ignite, and they shared that so much more is coming as the program adds more training and role-based certification options over the coming months.

A regular reminder this week during many sessions was the fact that Windows 7 will reach its end of lifecycle support in a little less than 16 months from now. Prior to Ignite, Microsoft shared details about their plan to offer extended support to customers who need to stay on Windows 7 past that date. This week at Ignite, the possibility of getting that extended support at no additional cost was made available when Microsoft announced their new Windows Virtual Desktop service which is hosted on Azure. That service provides either a Windows 10 or Windows 7 virtual desktop and accessing Windows 7 via this service includes three years of extended support at not additional cost. This is big for companies who are already moving towards Microsoft 365 and need some remnant of Windows 7 to support legacy apps during their final stages of migration.

Other announcements, news, and analysis:

Finally, the Ignite experience continues.  Microsoft Ignite: The Tour will bring more than 100 deep dive sessions and workshops to 17 cities around the world. And the dates for Microsoft Ignite 2019 were announced; it will once again return to Orlando, but the show will be held from November 4 - 8, 2019. With luck, that means a little less heat and humidity.