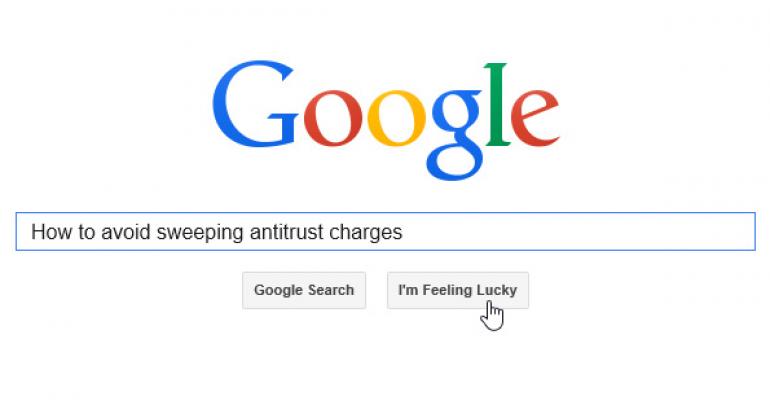 After years of missteps and half-hearted offers, Google is poised to settle antitrust charges in the European Union (EU) and avoid the sweeping fines and lengthy trials that dogged Microsoft a decade earlier. The EU confirmed today that a preliminary examination of Google's third settlement offer does finally address the firm's anticompetitive behavior in a meaningful way.

"I believe that the new proposal obtained from Google after long and difficult talks can now address the Commission's concerns," European Competition Commissioner Joaquin Almunia confirmed. The EC will again seek feedback from Google's competitors, which includes the FairSearch industry group that is backed by Microsoft. But it's unlikely that any further changes to the settlement are forthcoming.

Google claims it has, if belatedly, offered to finally change the way it steals content from rivals and then buries or excludes these rivals under an avalanche of tainted search results.

"We will be making significant changes to the way Google operates in Europe," Google General Counsel Kent Walker said in a statement. "We have been working with the European Commission to address issues they raised and look forward to resolving this matter."

For a time, it seemed that Google would never resolve this matter.

After a two-year investigation found that Google was illegally harming competitors with its online search business in Europe, the European Union in May 2012 announced that it had given the search giant an ultimatum: Settle, or be charged with sweeping antitrust charges that could result in up to $5 billion in fines and strict behavioral remedies. Google provided the EC with two settlement proposals, one in early 2013 and one in mid-2013, both of which were found to be lacking. But as the months rolled by, it seemed that Google would never be required to change its business practices, and the EC was notably patient. In late 2013, the EC finally asked that Google submit a third settlement proposal and said that if it found the offer acceptable, the firm could escape punitive punishment.

It has found the offer acceptable. Under the terms of the latest settlement offer, Google will agree to let rivals display their logos and web links in a prominent box, will allow content providers to decide what material Google can use for its own services (rather than just silently steal that content and republish it), and will drop restrictions that prevented advertisers from moving to rivals such as Yahoo! Search or Bing.

Microsoft watchers are right to wonder how Google—which controls and leverages the personal information of billions of users—has somehow escaped the scrutiny and ire that regulators showed to Microsoft, a far less dangerous monopoly power from the past. In many ways, it's simply a matter of timing: While it seemed powerful at the time, we now understand that Microsoft's market power was far less reaching than originally understood. And the natural evolution of personal computing has since altered the competitive landscape without any intervention from antitrust regulators.

It's fair to say, too, that Google has benefited from the experiences of firms like Microsoft and Intel, older firms that went through the antitrust grinder as Google was just getting started. Also, the regulatory world has changed in the intervening years. Today's EC, led by Mr. Almunia, is far more likely to seek cooperative settlements than was the Neelie Kroes-led EC of a decade ago. Almunia has said that the big fines of the Kroes era were not as effective at getting large companies to behave properly. (But I suspect the EC won't be issuing a refund to Microsoft, which paid an incredible $3 billion in EU antitrust-related fines over the past decade.)

What these changes don't account for, sadly, is the fact that Google has a far tighter grip on consumers' data, and a much broader reach and inclination to harm others than Microsoft ever had. Google's anticompetitive behavior impacts virtually everyone in the countries in which it does business, whereas Microsoft's influence a decade ago applied only to PC users, a comparatively small audience. In many ways, the two companies are not even comparable, making the white-glove treatment that Google has received at the hands of regulators in both the United States and Europe both shameful and dangerous.

But perhaps there's still hope. Google still faces charges in Europe that it dumped Android into the mobile market to illegally seize market share and harm competitors such as Apple, BlackBerry, Microsoft, Nokia, and others. Or, as Google describes it, Android is "an open platform that fosters competition."

Google is the Largest Tech Lobbyist of the US Government
Jan 23, 2014