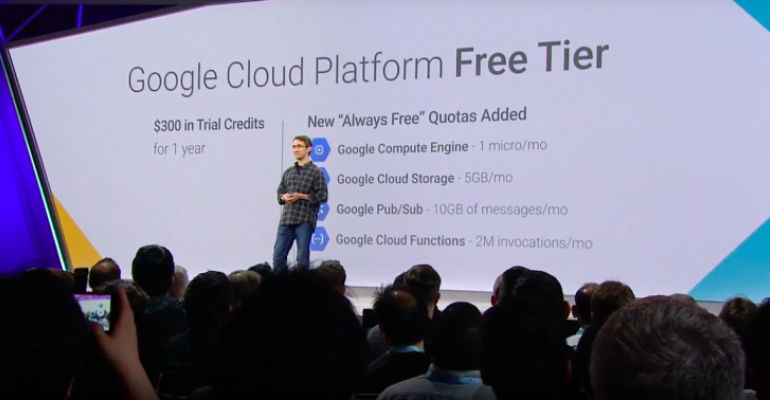 At Google&#39;s Cloud Next &#39;17 event in San Francisco, the company unveiled a multitude of new services and features aimed at enhancing user experiences for enterprises and their workers.&nbsp;

Google has just launched a variety of new Drive features and tools, as well as expanded Google Cloud Platform security features, all aimed at providing a raft of improved services and features for enterprises and their users.

Highlighting the latest enterprise features are new Team Drives, which allow teams of workers to share Drive file storage while maintaining corporate data security controls; expanded Google Vault for Drive features which give systems administrators the governance controls they need to manage and secure their corporate files; and Drive File Stream, which allows teams to quickly stream files directly from the cloud to their computers. Also new are several Google Cloud Platform features aimed at bolstering security for users, including an Identity-Aware Proxy which allows users to manage granular access to applications based on risk, rather than the "all-or-nothing" approach of VPN access; a Data Loss Prevention API which lets users scan for more than 40 sensitive data types so they can identify and redact sensitive data; a Key Management System which lets users generate, use, rotate and destroy symmetric encryption keys for use in the cloud, and Security Key Enforcement which allows users to require security keys as a two-step verification factor for stronger authentication whenever a user signs into G Suite or the cloud itself.

The latest services and features were unveiled March 9 at the company's three-day Google Cloud Next '17 developers event, which is being held in San Francisco.

The new and expanded Drive features are being targeted by Google to better serve enterprise customers who need file storage and sharing features that include additional security needed by businesses, wrote Alex Vogenthaler, a Google Drive product manager, in a post on the Google Blog.

"Google Drive has always made it easy for individuals to safely store, sync and share files," he wrote, but "as larger companies move to the cloud, there's more to think about — like the risk of data breaches, bumpy migrations, and compatibility with legacy tools." With that in mind Google is creating the special Teams Drives for teams of workers to share and use collaboratively, while also managing the lifecycles of data files with expanded features in Google Vault for Drive to help companies stay in control of their sensitive data.

The expanded Google Vault for Drive capabilities will work for employee Drives as well as with Team Drives, according to Vogenthaler's post. The new features also allow administrators to set retention policies that automatically keep what they need and get rid of what they don't need. Google Vault for Drive is generally available to all G Suite Business, Education, and Enterprise customers.

Drive File Stream, which is now available in Google's Early Adopter Program (EAP), allows enterprise users to quickly access, search and manage files on-demand from their computers, while delivering only the files that are needed at the time, the post continued. Other files can also be designated for offline use later. Data File Stream also helps enterprises avoid the need for file syncing and concerns about disk space.

Google has announced about 100 new products, features and acquisitions at its Cloud Next '17 event, according to the company, which also includes an expansion of languages supported by Google App Engine. App Engine now supports Node.js, Ruby, Java 8, Python 2.7 or 3.5, Go 1.8, as well as PHP 7.1 and .NET Core in beta, the company announced.

Also introduced at the event is a developer preview of the all-new Gmail Add-ons, which lets developers build access to apps into Gmail so users can make a single tap on a device screen to use apps directly while composing email messages. The feature will allow developers to trigger workflows based on an email's content as a message is written, according to Google. Developers will be able to build their integration once and it is designed to run natively in Gmail on the web and Android and iOS devices immediately. Users will have to install the Add-on once, and then it will appear in Gmail across all of their devices.

Several sample Add-ons include offerings from Intuit QuickBooks, which lets Gmail users and QuickBooks small business customers generate and send invoices and confirm invoice status without leaving Gmail; ProsperWorks, which lets Gmail users check the contact info of people on email threads against the information stored in their CRM; and Salesforce, which allows Gmail users to look up existing contacts add new ones and associate email threads with one or more existing opportunities in Salesforce, from the Gmail app.