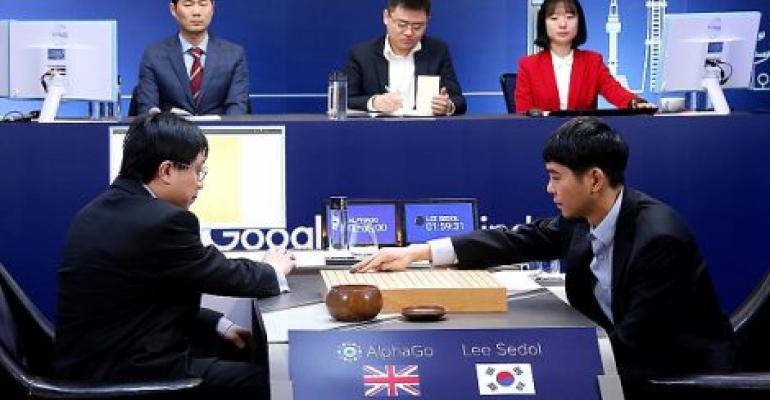 A growing number of enterprises are using new combinations of AI tools and cloud services from Microsoft, Amazon, and Google

Dina Bass and Mark Bergen (Bloomberg) -- Back in October, Deschutes Brewery Inc.’s Brian Faivre was fermenting a batch of Obsidian Stout in a massive tank. Something was amiss; the beer wasn’t fermenting at the usual temperature. Luckily, a software system triggered a warning and he fixed the problem.

"We would have had to dump an entire batch," the brewmaster said. When beer is your bottom line, that's a calamity.

The software that spotted the temperature anomaly is from Microsoft Corp. and it's a new type that uses a powerful form of artificial intelligence called machine learning. What makes it potentially revolutionary is that Deschutes rented the tool over the internet from Microsoft's cloud-computing service.

Day to day, Deschutes uses the system to decide when to stop one part of the brewing process and begin another, saving time while producing better beer, the company says.

See also: This Data Center is Designed for Deep Learning

The Bend, Oregon-based brewer is among a growing number of enterprises using new combinations of AI tools and cloud services from Microsoft, Amazon.com Inc. and Alphabet Inc.'s Google. C-SPAN is using Amazon image-recognition to automatically identify who is in the government TV programs it broadcasts. Insurance company USAA is planning to use similar technology from Google to assess damage from car accidents and floods without sending in human insurance adjusters. The American Heart Association is using Amazon voice recognition to power a chat bot registering people for a charity walk in June.

AI software used to require thousands of processors and lots of power, so only the largest technology companies and research universities could afford to use it. An early Google system cost more than $1 million and used about 1,000 computers. Deschutes has no time for such technical feats. It invests mostly in brewing tanks, not data centers. Only when Microsoft, Amazon and Google began offering AI software over the internet in recent years did these ideas seem plausible. Amazon is the public cloud leader right now, but each company has its strengths. Democratizing access to powerful AI software is the latest battleground, and could decide which tech giant emerges as the ultimate winner in a cloud infrastructure market worth $25 billion this year, according to researcher IDC.

"There's a new generation of applications that require a lot more intense data science and machine learning. There is a race for who is going to provide the tools for that," said Diego Oppenheimer, chief executive officer of Algorithmia Inc., a startup that runs a marketplace for algorithms that do some of the same things as Microsoft, Amazon and Google's technology.If the tools become widespread, they could transform work as more automation lets companies get more done with the same human work force.

C-SPAN, which runs three TV stations and five web channels, previously used a combination of closed-caption transcripts and manpower to determine when a new speaker started talking and who it was. It was so time-consuming, the network only tagged about half of the events it broadcast. C-SPAN began toying with Amazon's image-recognition cloud service the same day it launched, said Alan Cloutier, technical manager for the network's archives.

Now the network is using it to match all speakers against a database it maintains of 99,000 government officials. C-SPAN plans to enter all the data into a system that will let users search its website for things like Bernie Sander's healthcare speeches or all times Devin Nunes mentions Russia.

As companies try to better analyze, optimize and predict everything from sales cycles to product development, they are trying AI techniques like deep learning, a type of machine learning that's produced impressive results in recent years. IDC expects spending on such cognitive systems and AI to grow 55 percent a year for the next five years. The cloud-based portion of that should grow even faster, IDC analyst David Schubmehl said.

"In the fullness of time deep learning will be one of the most popular workloads on EC2," said Matt Wood, Amazon Web Services' general manager for deep learning and AI, referring to its flagship cloud service, Elastic Compute Cloud.

Pinterest Inc. uses Amazon's image-recognition service to let users take a picture of an item -- say a friend's shoes -- and see similar footwear. Schools in India and Tacoma, Washington, are using Microsoft's Azure Machine Learning to predict which students may drop out, and farmers in India are using it to figure out when to plant peanut crops, based on monsoon data. Johnson & Johnson is using Google's Jobs machine-learning algorithm to comb through candidates' skills, preferences, seniority and location to match job seekers to the right roles.

Google is late to the public cloud business and is using its AI experience and massive computational resources to catch up. A new "Advanced Solutions Lab" lets outside companies participate in training sessions with machine-learning experts that Google runs for its own staff. USAA was first to participate, tapping Google engineers to help construct software for the financial-services company. Heather Cox, USAA's chief technology officer, plans a multi-year deal with Google.

The three leaders in the public cloud today have also made capabilities like speech and image recognition available to customers who can design apps that hook into these AI features -- Microsoft offers 25 different ones.

"You can build software that is cognitive -- that can sense emotion and understand your intent, recognize speech or what’s in an image  -- and we provide all of that in the cloud so customers can use it as part of their software," said Microsoft vice president Joseph Sirosh.

Chris Nicholson, CEO of AI company Skymind Inc., isn’t sure how large the market really is for AI in the cloud. The massive data sets some companies want to use are still mostly stored in house and it's expensive and time-consuming to move them to the cloud. It’s easier to bring the AI algorithms to the data than the other way round, he said.

Amazon's Wood disagrees, noting healthy demand for the company's Snowball appliance for transferring large amounts of information to its data centers. Interest was so high that in November Amazon introduced an 18-wheeler truck called Snowmobile that can move 100 petabytes of data.

Microsoft's Sirosh said the cloud can be powerful for companies that don't want to invest in the processing power to crunch the data needed for AI-based apps.

Take Norwegian power company eSmart Systems AS, which developed drones that photograph power lines. The company wrote its own algorithm to scan the images for locations that need repair. But it rents the massive computing power needed to run the software from Microsoft's Azure cloud service, CEO Knut Johansen said.

As the market grows and competition intensifies, each vendor will play to their strengths.

"Google has the most credibility based on tools they have; Microsoft is the one that will actually be able to convince the enterprises to do it; and Amazon has the advantage in that most corporate data in the cloud is in AWS," said Algorithmia's Oppenheimer. "It's anybody's game."