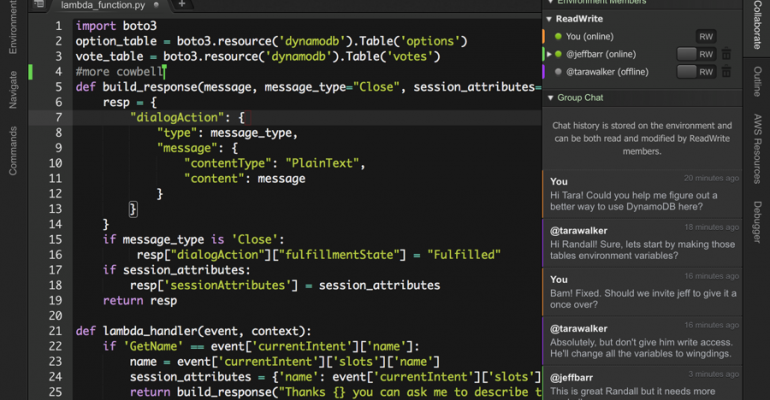 Cloud9, which AWS acquired in 2016, is tightly integrated with a wide range of AWS services to allow users to write their code in the cloud.

Sixteen months after acquiring Cloud9 and its Integrated Developer Environment (IDE) flagship product, Amazon Web Services has reworked and reintroduced it as AWS Cloud9 to work with its wide range of cloud services.

The AWS Cloud9 IDE platform, which was announced Nov. 30 at the company's AWS re:Invent conference in Las Vegas, is a cloud-based service that runs in a web browser to allow users to write, run and debug code without having to install any applications or configure any development machines.

AWS customers will be able to use the AWS Cloud9 services and be charged only for the underlying compute and storage resources they consume, according to a blog post by Randall Hunt, a senior technical evangelist at AWS.

"AWS Cloud9 comes prepackaged with essential tools for many popular programming languages (JavaScript, Python, PHP, etc.) so you don't have to tinker with installing various compilers and toolchains," wrote Hunt. "Cloud9 also provides a seamless experience for working with server-less applications, allowing you to quickly switch between local and remote testing or debugging."

Users can also choose to add their own debugging tools for other languages as needed so they can build code in more languages, wrote Hunt.

Through its deep integration with AWS cloud services, AWS Cloud9 users can launch it within a Virtual Private Cloud to give it secure access to development resources, or it can be run outside of AWS as needed.

Using AWS Cloud9, developers can also easily share the environment with coworkers, opening their projects up to wider collaboration, wrote Hunt. This can be done by inviting another AWS Identity and Access Management user to a development environment with a few clicks so developers can see which files are being worked on and join in to the projects.

The AWS Cloud9 service joins a busy IDE marketplace, which is filled with a myriad of open source and proprietary IDE products.

A November 2017 ranking of the worldwide IDE market, by the PYPL (PopularitY of Programming Language) Index, found that Cloud9 is the 19th most popular IDE product, with a 0.65 percent share of the market, being searched using Google.