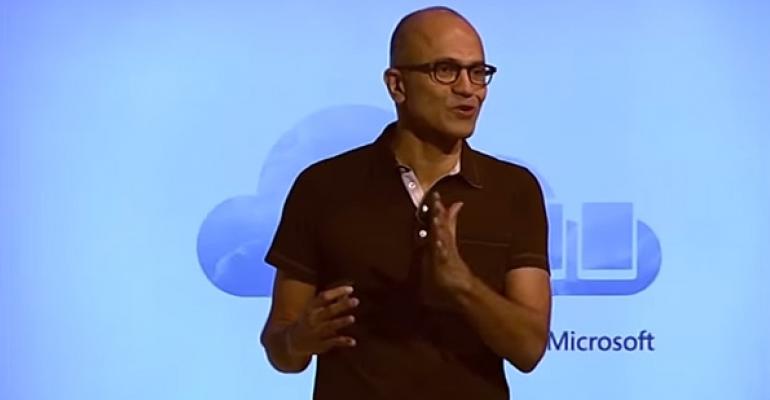 2014 Was the Year of Mobile First, Cloud First

With 2014 winding to a close, it's pretty clear that Microsoft's "mobile first, cloud first" mantra is the most important trend of the year, one will look back on and remember as an inflection point of sorts between or on premises and PC-based past and this new way of doing things. That slow-moving Microsoft was able to reinvent itself is amazing in its own right. But the real story here is whether its massive customer base moves forward with it.

That, alas, is a story for another year. And there are certainly signs—both positive and negative—that suggest we'll be discussing this transition for some time to come. But in moving so decisively to "mobile first, cloud first," Microsoft has finally added action to words. This isn't about making pronouncements, it's about really enacting change.

And that change is happening. In a year in which we were between major releases in all of Microsoft's giant but traditional software businesses, the software giant reasserted itself as the world's primary provider of productivity solutions, and it did so wherever its customers can be found. There were no major Office products for Windows or Mac—unless you consider standalone and free OneNote apps to be a major development—but then there really didn't need to be. So it went mobile first.

It started of course with Office for iPad, a set of apps so immediately solid and usable that they have forever recast the iPad into something Apple wasn't able to achieve on its own: Serious productivity workstations. And Office for iPad improved both functionally and from a licensing perspective over the course of 2014, to the point today where basically any iPad user can have a full-featured Office suite for free. Now it's just a no-brainer.

Office also made its way to Android tablets in preview form, and to the iPhone, late in 2014. By that point, Windows fans were grumbling that Microsoft was ignoring their favorite computing platforms in favor of trendier Android and iOS releases, and while there is some truth to that, there's also a point to be made about following your customers wherever they go. By not being cute about artificially supporting its own platforms first or better, Microsoft was sending the message that it can be trusted to do the right thing. And when you think about a supplier of business class solutions, that is indeed the correct message.

And it wasn't just the core Office apps, of course. The firm released its first new Office app in years, called Sway, a solution that positively screams "mobile first, cloud first" in ways that its more traditional productivity solutions never will. It essentially completed the merger of Skype and Lync, both functionally and thematically.

And it wasn't just Office. Microsoft's other big "mobile first, cloud first" success story in 2014 was of course Azure, now the number two business-class public cloud after Amazon's AWS, and a sprawling system that has positively exploded past its humble Windows Azure roots. Most of what we saw in Azure this year was a rapid-fire attempt to scale as much of Windows Server's on-premises capabilities to the cloud, but that didn't mean Microsoft had no surprises for us in 2014: It embraced open source in Azure in a nod, again, to the realities of today's world: Enterprise computing workloads are a mix of platforms, and now, so too is Azure. So we see massive Linux support, of course, but also support for Docker containers, an increasingly open-sourced .NET stack, and more.

On the mobile side, Microsoft didn't exactly give up on its own platforms in 2014 either. It acquired Nokia's devices and services businesses for $7.2 billion early in the year, assuring a safe home for 90+ percent of the Windows Phone hardware market moving forward. It reduced the cost of licensing Windows to "zero dollars" for the lowest end of the market (and to all phones), dramatically expanding the market for inexpensive new Windows devices. And it released new versions of Windows for PCs and tablets (Windows 8.1) and phones (Windows Phone 8.1 and then a later 8.1.1 update), addressing major concerns with each platform.

Those new Windows versions brought PC/tablet and phone closer together, but the odd thing is that on the "big" Windows side, Windows 8.1 was more of an evolutionary release, one that made the most disputed version of the platform ever a bit more palatable to disgruntled users of traditional PCs. But Windows Phone 8.1 was a major release, coming a year and a half after its predecessor, and was if anything overdue. But in shipping two Windows Phone releases in 2014, not to mention two firmware updates for its Lumia smartphones (acquired from Nokia), Microsoft signaled that Windows Phone was back on the rapid release bandwagon where it belongs.

And then there is Surface.

Once the laughing stock of the hardware market, and a partner with Windows 8 in causing a hardware partner exodus to ChromeOS for PCs and Android for devices, Microsoft's Surface business rebounded nicely in 2014 courtesy of some deft decision making on the part of CEO Satya Nadella and his executive team. Originally planning to ship a late-to-market mini-tablet based on Windows RT (the OS no one wants) called Surface Mini, Microsoft put the brakes on and promoted a former side-show to the main event. So Surface Mini was cancelled and Surface Pro 3 was expanded with multiple product editions featuring a range of CPU, RAM and storage choices, not to mention an Ultrabook-sized screen. Ca-ching.

Surface Pro 3 has been a tremendous success for Microsoft, catapulting the business to profitability in its launch quarter for the first time ever. But Surface Pro 3 is more important than whatever raw sales numbers it may achieve: This is an aspirational device, one that potential customers see routinely out-performing Apple's long-in-the-tooth Macbook Air in constantly-running TV ads. These ads, about the right device, are convincing people that Microsoft's device message is correct. And even if they end up buying a lower-end Windows convertible or 2-in-1 PC, whatever. It's all good.

Heading into the New Year, Microsoft finds itself with a complete portfolio of cloud services, mobile apps on all popular mobile platforms to support those services, and a growing lineup of first-party hardware that addresses the real needs of the markets in which they compete. There's more to do, of course. There always is. But after years of floundering, of talking big and not backing it up, it really does feel like Microsoft is back in a big way.