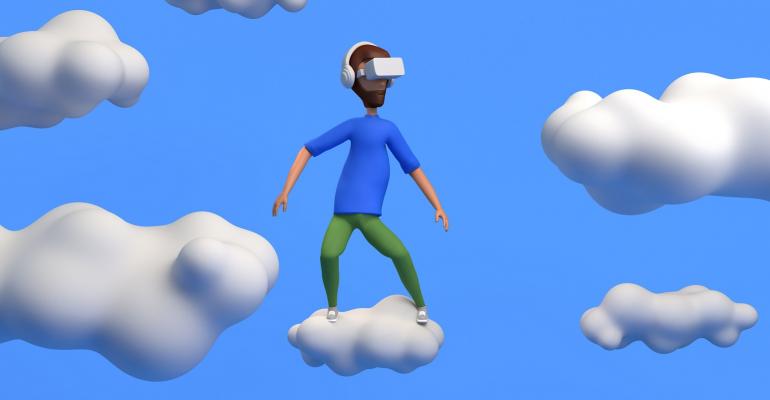 How the Metaverse May Impact Cloud Computing

If the metaverse ends up being as big as many think, it will be a boon for the cloud. Here are five ways the metaverse may impact cloud computing.

What does the metaverse — the set of interconnected 3D environments that is poised to revolutionize the way people interact on the internet — mean for cloud computing?

The answer is anyone's guess, given that the metaverse remains a somewhat fuzzy concept and that we're still in the very early stages of actually building a metaverse.

Still, the ideas behind the metaverse are sufficiently well-formed at this point to facilitate informed guesses about how the rise of the metaverse may change the way we use and manage the cloud.

Toward that end, here's a look at five main ways that the metaverse — whatever form it ends up taking — is likely to affect the cloud.

First and foremost, the rise of the metaverse is likely to increase demand for cloud computing services even further.

The reason why is simple: Hosting 3D environments requires a lot of compute and storage resources, and it's a safe bet that few businesses that want to run a metaverse environment will be purchasing their own hardware to do so. Instead, they'll turn to the cloud to host the metaverse, as they already do for a majority of other workloads.

So, add the metaverse to the list of reasons why cloud computing providers are likely to become even richer in coming years.

That said, the profits that the metaverse drives for cloud computing platforms may not flow primarily to the major generic public cloud providers — namely Amazon, Google, and Microsoft.

Instead, we may see alternative clouds emerge that specialize in metaverse hosting. That's especially true given that the infrastructure necessary to run metaverse environments may require specialized hardware — such as GPUs — that are not currently a major focus of large public cloud providers. AWS, Microsoft Azure, and Google Cloud Platform (GCP) offer some GPU-enabled VM instances, but they don't specialize in that market, which creates an opportunity for smaller cloud providers to fill the gap.

To the extent that the large public clouds do invest in metaverse hosting, I suspect they will do it by launching managed services that will amount to metaverse-as-a-service — which means fully hosted and managed offerings that enable customers to deploy their own, custom metaverse environments with little effort.

It's possible the cloud providers will build these metaverse services entirely from scratch — just as AWS built its ECS container orchestration service by scratch, for example. Or, they may leverage open source metaverse platforms, like Vircadia, as the foundation for metaverse-as-a-service offerings — in a fashion very similar to what they have done with Kubernetes.

One of the major technical challenges that may arise as the metaverse expands is ensuring that bandwidth limitations or internet connectivity disruptions don't disrupt users' ability to experience the metaverse seamlessly.

Another challenge may be securing personal data that users store or create within the metaverse. Although it remains to be seen how regulators will define or treat personal information in the metaverse, there is already good reason to believe that it will need to be protected in the same way that personally identifiable information is protected in a conventional cloud environment.

Both of these challenges — the need for better performance and the need for high data security — are likely to result in demand for hybrid cloud architectures as a means of hosting metaverse environments. Hybrid cloud can boost performance and availability by placing hosting resources closer to end users. It can also improve data security by allowing data to stay on private servers instead of exposing it to the public cloud.

Expect at least some metaverse entities, then, to be hosted in hybrid cloud environments.

Another way to improve performance and availability for the metaverse is to push metaverse hosting and analytics to the "edge." In other words, users' own devices — instead of cloud data centers and servers — will be responsible for running at least some of the software that powers the metaverse. That approach will allow organizations to sidestep performance problems associated with relying on the internet as the only means of delivering metaverse connectivity.

Thus, expect edge computing — however you define it — to become even more important thanks to the metaverse. By extension, we'll likely see more investing in edge computing management platforms, like Kubernetes, that can help businesses keep track of the distributed edge infrastructure that hosts their metaverse environments.

Again, it's too early to say definitively how the metaverse will reshape cloud computing. But if I had to make early bets, they'd center on increased use of the cloud overall, and of hybrid and edge cloud architectures in particular. I also think we'll see cloud providers start building their own metaverse-as-a-service offerings, and there may be an opening for alternative cloud providers to serve the metaverse market in a way that the large public clouds won't.