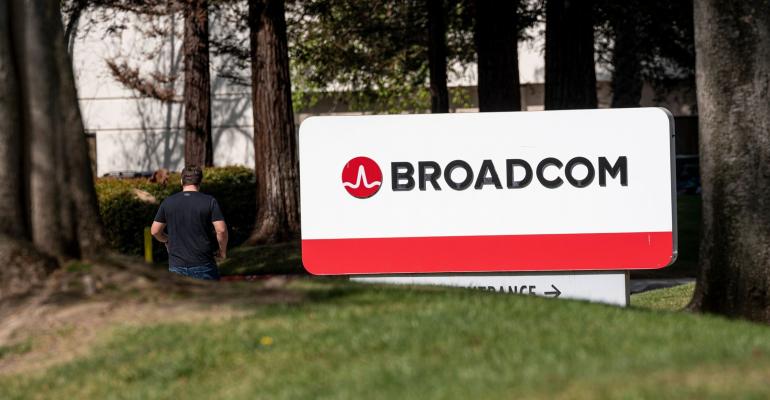 A deal for VMware would rank among the biggest-ever acquisitions of a technology company. Shares in VMware rose as much as 20% on Monday morning.

(Bloomberg) -- Broadcom Inc. is in talks to acquire VMware Inc., the cloud-computing company backed by billionaire Michael Dell, setting up a blockbuster tech deal that would vault the chipmaker into a highly specialized area of software.

The takeover discussions are ongoing and there’s no guarantee they will lead to an agreement, people with knowledge of the matter said, asking not to be identified because the talks are private. VMware currently has a market valuation of about $40 billion. Assuming a typical premium, the potential deal price would be higher, though the terms under consideration couldn’t be learned.

Shares in VMware rose as much as 20% on Monday morning in New York, the most since 2007 and giving the company a market value of $48 billion. Broadcom, which has a valuation of about $213 billion, fell 4.4%.

A deal for VMware would rank among the biggest-ever acquisitions of a technology company. The industry has been one of the bright spots for bankers in recent months, even as the overall pace of dealmaking slows from 2021’s record pace.

Related: 4 Options for Building a Hybrid Cloud: Kubernetes, VMware and Beyond

Takeovers of technology companies globally are up 46% this year to $263 billion, according to data compiled by Bloomberg. The tally was buoyed by Microsoft Corp.’s agreement in January to buy video game publisher Activision Blizzard Inc. for $69 billion. A consortium backed by Vista Equity Partners is acquiring software maker Citrix Systems Inc. for $13 billion, while Elon Musk announced a $44 billion deal for Twitter Inc. last month.

The transaction would extend a run of acquisitions for Broadcom Chief Executive Officer Hock Tan, who has built one of the largest and most diversified companies in the chip industry. Software has been a key focus in recent years, with Broadcom buying CA Technologies in 2018 and Symantec Corp.’s enterprise security business in 2019.

In March, Tan told analysts on a post-earnings call Broadcom had the capacity for a “good size” acquisition.

“Investors have been increasingly focused on Broadcom’s appetite for another strategic or platform enterprise software acquisition—especially given the recent compression in software valuation, “Wells Fargo analysts wrote after Bloomberg News’s report. “An acquisition of VMware would be considered as making strategic sense; consistent with Broadcom’s focus on building out a deepening enterprise infrastructure software strategy.”

Broadcom makes a wide range of electronics, with its products going into everything from the iPhone to industrial equipment. But data centers have become a critical source of growth, and bulking up on software gives the company more ways to target that market.

Broadcom was previously in talks to acquire SAS Institute Inc., a closely held software company valued at $15 billion to $20 billion. But those discussions ended last year without a deal.

Tan also was thwarted in his biggest takeover attempt of them all: a bid to buy rival chipmaker Qualcomm Inc. He had to walk away from that deal in 2018 after Broadcom encountered resistance from the Trump administration. One concern was Broadcom’s Singapore headquarters, and the company has since switched its domicile to the US. It is now based in San Jose, California, about 20 miles from VMware’s Palo Alto headquarters.

VMware, founded in 1998, is a pioneering Silicon Valley company that has already changed hands a number of times. It invented so-called virtualization software, which consolidated applications and workloads on a smaller number of server computers by using each server to handle more than one program.

But as more tasks moved to the cloud, VMware struggled to keep up growth and carve out a key role for itself. The company eventually forged a close partnership with Amazon.com Inc., one of the biggest providers of cloud storage and services.

VMware was acquired by storage technology giant EMC Corp. in 2004. That company then sold part of its stake as part of VMware’s initial public offering three years later. The business passed to Dell Technologies Inc. when that company acquired EMC in 2016. VMware then spun off from Dell last year.

Software would help decrease Broadcom’s reliance on chips. But its previous forays into that market haven’t always been applauded by investors. Tan has argued that he looks for businesses that are “franchises” -- ones that hold a strong market position and can be made more profitable without pouring in huge investments.

Shares of Broadcom and VMware have both slid roughly 18% this year, hurt by a broader rout. But they haven’t been hit as hard as many tech stocks. The Philadelphia Stock Exchange Semiconductor Index is down 27% this year.

Chipmakers like Broadcom have enjoyed booming sales in recent years, fueled by the spread of semiconductors into more products -- as well as by the need for work-from-home technology during the pandemic. But Tan has warned that the boom times probably won’t last.

Even after giving an upbeat sales forecast in March, Tan said that the semiconductor industry won’t be able to stay on its current trajectory. He expects the chip business to decelerate to historical growth rates of about 5%.

“If anyone tells you otherwise, don’t believe it, because it has never happened,” he said on a conference call at the time. Industry leaders claiming that the semiconductor industry can grow at the current rate for an extended period are “dreaming,” he said.