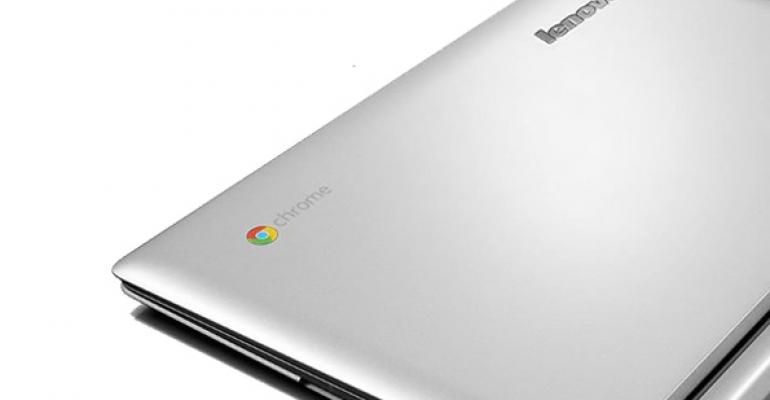 Intel Gets Serious About Chromebook

Most of today's Chromebooks are based largely on lackluster ARM and Celeron platforms. But starting later this year, you'll be able to choose between dozens of Chromebook models that are based on modern Intel platforms like the Core i3 and the Bay Trail-M system-on-a-chip (SoC). These devices—many of which will offer touch-screens, too, including some convertible models—will represent a significant threat to Windows in the crucial low-end of the market.

Last October in Assessing the Chromebook Threat, I discussed Google's web browser-based OS and the laptop-like machines on which it typically runs. (There is a similar desktop-based option called the Chromebox that is a lot less enticing or successful.) In that article, I described Chromebook as the second front in Microsoft's post-PC war. These devices are cheap—some cost as little as $250—and familiar but simpler than most Windows laptops. But they come up short in two key areas: Performance and capabilities.

That's where Intel—and, as important, its PC maker partners—step in. Today, Google and a slew of other companies announced a new generation of Chromebook devices that will ship later this year. The Intel chipsets in these devices will help dramatically with performance, obviously, and given the thin and light nature of ChromeOS compared to the top-heavy Windows and Mac OS X OSes against which it competes, that performance bump could be significant. And Google's fast-as-ever evolution of ChromeOS will help close the capabilities gap. More on that last bit later.

So what was announced?

Almost a dozen new Chromebook models, for starters. And they're from the world's biggest PC makers, too: Acer, ASUS, Dell, HP, Lenovo, and Samsung all have new Intel-based Chromebook models coming in 2014, and some will have several new models. These devices will utilize a variety of Intel chipsets, including Bay Trail, "Haswell" Celeron, and Core i3, on a variety of form factors. (And the Bay Trail designs are fan-less.) Most Chromebooks feature 11.6-inch screens—they seem ideally suited for schools—but there are 13.3-inch options too. Most are fairly low resolution (1366 x 768), but there are some higher resolution 1920 x 1080 (Full HD) options too. Battery life is up to 11 hours, depending on the model. And pricing ranges from $250 to $400. They're not expensive.

The one thing Chromebook makers continue to get wrong, in my opinion, is onboard storage: All of the new models announced today feature just 16 GB of SSD-based storage, though one (the ASUS C300) will ship with a more acceptable 32 GB. I look at Chromebook storage as I do tablet storage, and while 16 GB is OK for basic needs, it won't help anyone trying to watch movies offline during a flight, or similar offline scenarios. In this day and age, 32 GB should be the minimum, but most of them appear to at least offer SD expansion.

The danger to Windows here is great. As with Google's free online services, there's a danger that students who experience computing on a Chromebook will never need or want more powerful but complex Windows-based systems running full Microsoft Office. And the education market is unique in that it values low cost above all else: We can laugh off Chromebook for tech-savvy individuals and businesses—I've heard routinely from PC makers that Chromebook has made absolutely zero inroads in the business market, for example—but the threat in education is very real.

According to Google, Chromebook usage in schools has doubled since September, and over 10,000 schools now deploy the devices to students. Chromebooks make up the top six best-selling laptops on Amazon.com, the firm claims, and seven of the top 10. People love a bargain. (Google also claimed that "Chromebox is the number one selling desktop." I find that hard to believe.)

Since I'm a huge fan of Lenovo, and that firm did just announce some new Chromebook designs, let's look at what's changing there.

Today, Lenovo offers a single Chromebook model, the ThinkPad X131e. This device targets the education market, is fairly expensive for a Chromebook (it starts at $430) and offers a durable if thick and heavy ThinkPad laptop form factor. It's nothing special and clearly aimed at school kids.

But Lenovo's new Chromebooks are quite a bit more compelling. They will be sold broadly, so anyone can buy one easily, and they'll be less expensive than the education-only offering, at $279 or $329, depending on model. The entry level version, called the N20, is your typical laptop-based Chromebook. But the higher-end N20p jumps in Windows 8.1 2-in-1 territory with a multi-touch screen and, more alarmingly, a Yoga-like transforming screen that can be used in normal or stand modes thanks to 300 (rather than 360) degrees of positioning.

The N20p is still a Chromebook: It features a lackluster 16 GB of eMMC storage, a 1366 x 768 11.6-inch screen, and up to 4 GB of RAM. And it weighs 3.1 pounds, which is heavy for that kind of device. But let's get real. In the low-end of the market, this thing is a serious contender. And the firm also announced a ThinkPad YOGA 11e Chromebook. Yikes.

With regards to the capabilities of the OS, Google updates the ChromeOS software every six weeks. But the biggest hurdle, as always, is offline usage. To this end, it will update its Google Play content store sometime in the next few weeks so that users can play movies and TV shows offline. Which, when you think about it is a very basic capability. That's what I mean when I describe this system as improving quickly but still immature. It will only mature.

Some of these devices won't ship until late in the summer. But that's still in time for back-to-school, and if Microsoft wasn't taking the Chromebook threat seriously before, I assume it's standing upright and paying attention now. With Intel entering the mix in a serious way, and with Google continuing to improve the core OS, the Chromebook value equation is starting to make more and more sense.