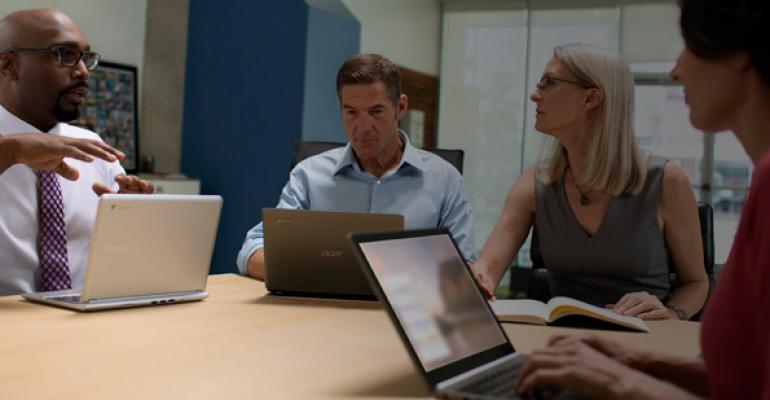 A lot less nuts than suggesting Linux, I guess

With XP riding off into the sunset, the scavengers are starting to descend on its carcass to pick off some of the estimated 450 million users still using this ancient and now unsupported PC operating system. Among them is Google, which this week offered up its low-end Chromebook system as a possible replacement.

It's not a completely insane idea, frankly. Many individuals who are still using Windows XP are likely among the crowd of people with minimal computing needs, signing on only occasionally to check email, browse the web, or post to Facebook. And it's fair to say that a Chromebook would solve those needs with a minimum of both hassle and cost.

Google is pushing the Chromebook as "a real change" and not "more of the same." And ... sure. It's definitely different. I'll point out, however, that "more of the same" is also "an operating system that was made 15 years ago and still meeting the needs of its users."

But it's not that simple.

Windows is complex, as are the PCs on which it runs. A Chromebook does at least offer a PC-like experience in a more mobile-savvy device that runs a web browser-based OS. There's some familiarity there, frankly, since much of what we do on a PC is browser-based already. I've called Chrome OS, the basis of a Chromebook, limiting because it is. But it may not be as limiting to those with simple needs. Especially those who stay home and have always-on broadband Internet connections.

What I'm more concerned with here are individuals. The people who have no idea that their ancient XP PC is out of date and could become more and more of a target for hackers over time.

(Chromebooks are also seeing some traction in schools, which makes sense given the cash-strapped nature of such institutions. According to NPD data cited by Google, Chromebooks made up 21 percent of U.S. commercial laptop sales to schools in 2013. That's actually pretty amazing.)

Every time I use a Chromebook, I find the experience limiting and lackluster, and I suspect that most readers of this site will as well. But then most people reading about the future of Windows aren't still using XP at home, either. That crowd is right to consider various options, including low-end Windows 8 laptops, Ultrabooks, Windows RT devices, mini-tablets, iPads, or ... yes, even Chromebooks. I'm not recommending it. But for that crowd, it's not necessarily nuts.