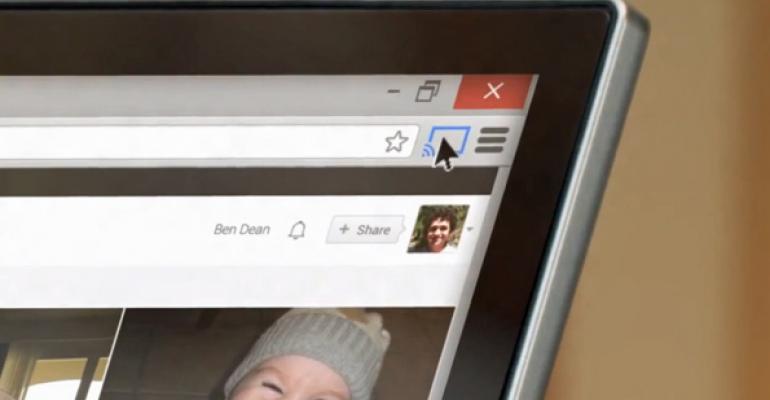 The easiest way to watch online video on your TV? Not even close

Google's third stab at the living room is small, cute and inexpensive. But my initial experiences with this device are underwhelming so I'll be testing it over the next week or so to determine whether it lives up to the hype. In the meantime, here's a quick peek at the device and some initial thoughts.

You have no doubt heard the old adage "you get what you pay for." That's never been more true than with the Chromecast, a $35 device that seeks to compete with such products as Roku (four models, $50 to $100), Apple TV ($100), and WD-TV (three models, $70 to $260). This device is so bare-boned and so barely functional I can't see myself recommending it to anyone. We'll see, but that's the initial impression. This thing is a joke.

First, it's not a standalone device. To use the Chromecast—to even set up the Chromecast—you need another compatible digital device. This can be a PC, an Android handset or tablet, an iPhone or an iPad. This device needs to be in front of your TV, ready to go at all times, like a glorified remote control. You cannot use Chromecast without it. So what you're really paying for is a way to blast a limited range of content from that device to your TV. Chromecast isn't a digital media set-top box. It's a dumb wireless display dongle. For $15 more you can get a complete, free-standing Roku box that comes with its own remote control. No brainer.

Second, as alluded to above, Chromecast is extremely limited. You can stream content from the Google Play Store (music or video), from Netflix, and from YouTube only. By comparison, Roku sports over 750+ channels of entertainment, including all the heavy hitters: Netflix, HBO GO, Vudu, Crackle, Amazon Instant Video, Hulu Plus, MLB.TV Premium, Disney, EPIX, SyFy, NOOK Video, and many, many more. 750 vs. 3. Do the math.

(OK, it's going to be 750 vs. 4 soon. Google has built beta support for Chromecast into Chrome as well, so you will soon be able to reliably stream from Google's browser too. It's a bit rough right now.)

Third, those pictures where you see this USB-dongle-looking-thing sticking out of the side of an HDTV, creating a clean look? Completely fake. The Chromecast requires a USB-based power cord and, on most TVs, an HDMI extension cable. The real look of this thing is in fact worse than putting a Roku or AppleTV under the set, though arguably some will be able to simply hide it.

Fourth, it's Wi-Fi only. Where you can get an Ethernet-equipped Roku or AppleTV for $99, Chromecast requires you to use that device plus whatever is controlling it on the same Wi-Fi network. And I had to set up a new Wi-Fi network because I couldn't get it to connect to the one every other device in the house uses without issue.

Which brings me to number five, the deal-breaker. We can quibble over my technical acumen, but I couldn't get this thing set up properly for days. I almost gave up. There are almost no instructions—I've seen more details on a cereal box give-away promotion—and no indication why things aren't working. The Chromecast is simple, yes. But not the good kind of simple.

And you know what? I'm not going to review this piece of crap. And you shouldn't buy it. There are just too many viable alternatives out there. A Roku is about 100 times better than the Chromecast and it's not much more expensive. Don't be dumb.

Pictures follow. If you're lucky, this will be the last time you ever see this thing.