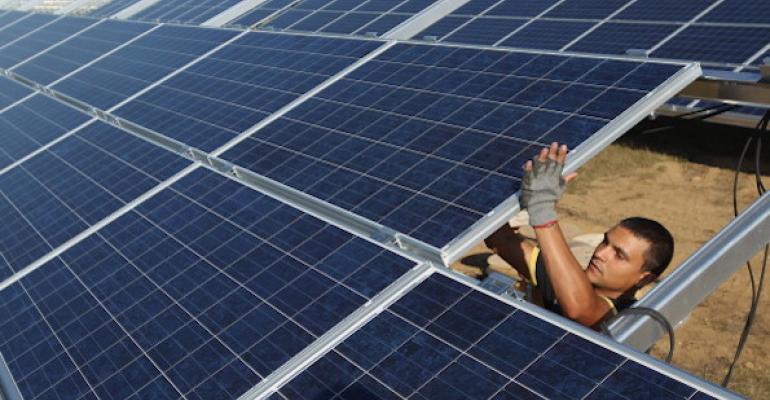 One of the emerging stories in virtual reality is how it will uncouple job opportunities from geographic location. We've seen this with the HoloLens tests Microsoft set up in partnership with NASA -- one in space, one under the sea -- with the idea that explorers could wear the headsets and get on-the-go training or troubleshooting from mission control. We've seen this with the HoloLens demonstrations at Ignite 2016, where the virtual reality headset was used to help design a kitchen without any of the professionals actually stepping into the space they were redoing.

But for me, the reality of how VR will change the nontechnical job market really sank in during the Intel press event.

On Wednesday, we Intel press event attendees put on our Oculus headsets for four discrete demonstrations: a zombie shoot-em-up game called Arizona Sunshine, a trip to the Ban Gioc waterfall, a college basketball game, and a live flying drone inspection of a solar panel array at a facility in Nevada.

Let me backtrack for a moment. I spent a decade working as a lifeguard, at everywhere from hotel pools to water parks, and while the swimming and lifesaving skills were the specialized requirements for the job, what I was really being paid to do was pay attention to my environment and prevent serious incidents before they happened.

Being paid to pay attention to something used to require being on site. Consider the forest fire lookouts employed through the American west. At one point, there were 10,000 people paid to simply sit and watch the land around them, looking for signs of fire. Now, there are a few hundred -- some states have already moved to aerial surveillance using cameras and aircraft.

At the same time, fire risk in the American west keeps climbing: decades of fire suppression, rising temperatures and years of drought have led to longer "fire seasons." So imagine state and federal land management agencies deciding to bring back fire lookouts -- only these people don't have to traipse to an isolated tower in the middle of nowhere. They can work from anywhere, in shifts, and their job will be to put on a headset, watch drone footage as the drones run prescribed routes, or direct the drone to inspect a smudge on the horizon. And if these VR fire inspectors see anything amiss, they can sound an alarm to contact on-the-ground firefighters.

The point is: VR will create a class of jobs where people will be paid to pay attention. And, unlike my lifeguarding job, they won't have to be onsite to combine their observation with their skilled training.

Imagine ranch owners who want to keep tabs on their herds without having to go out in terrible weather. The cowboy who rides through the cold could be replaced by a console jockey who works on their lanai in Florida.

Granted, the drone technology needs to become tougher -- drones will have to be able to go for hours in all weather and be fairly low-maintenance. There are social and legal issues to work out regarding the propagation of drones in public and private spaces. But the combination of VR plus drone could do for observe-and-report jobs what call center technology did for customer support jobs: remove the location dependencies from certain types of jobs.

(And the only people left working on site or in a specific geographic location are the ones whose specialized training and skills are necessary to respond to the emergency someone else observed.)

Remote work will soon be more than telework. Across the country, people might be able to get paid to pay attention.