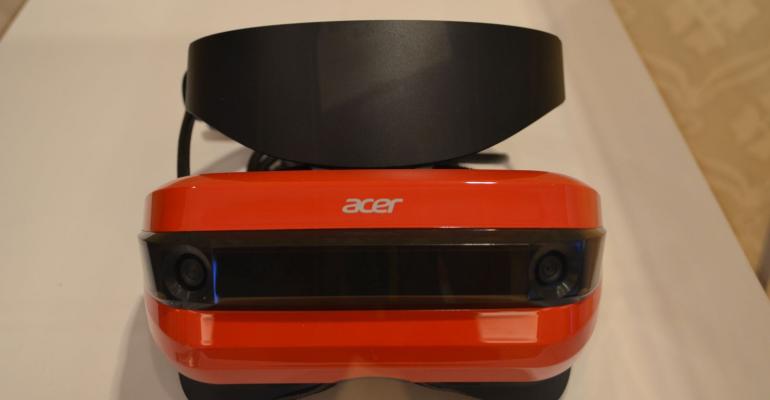 It has been a few years since Microsoft last had a booth on the CES Show Floor but that does not mean Microsoft does not have a presence at CES each year.

I had the opportunity to visit the Microsoft Showcase at CES on Day 1 of the show and the Redmond company had hardware on display from themselves and their OEM partners.

Some of those devices have been out for a while and others were just announced her at CES however, it was some devices covered with clear plastic cases  that caught my attention at the event.

You may remember that back in December, at their annual WinHEC conference in China, Microsoft unveiled Project EVO a partnership with Intel to bring mixed and virtual reality to the Windows 10 Creators Update that is now expected in April 2017.

Part of the Project EVO announcement included Head Mounted Displays, aka HMDs, that would be tethered to those Windows 10 Creators Update devices to bring 3D and Virtual Reality to everyone.

Well under those clear glass cases at the Microsoft event were non-functioning models of the HMDs from Acer, Lenovo, Dell, and HP. The fifth HMD on display was from 3glasses and it was the functioning version that was also demoed back at WinHEC.

So of course, I grabbed my camera and recorded some footage of all five HMDs to share with you all here for a sneak peek.

A couple of observations as I checked these HMDs out:

-  There was a power cable attached to each HMD that reminded me of the same gage of power cord, with a three prong plug, that you use on a desktop PC. That tether is real and will be a limitation of sorts when these HMDs are released.

- The 3glasses device had integrated headphones for sound however, the four OEM models did not have that based on my observations. It is possible they might be tucked in the headband but I guess we will have to see working models to know for sure.

I remember the first time I saw HoloLens up close at BUILD 2015 - it was also in a clear display case and out of reach but it has turned out very good. I hope we see the same with these HMDs as well.