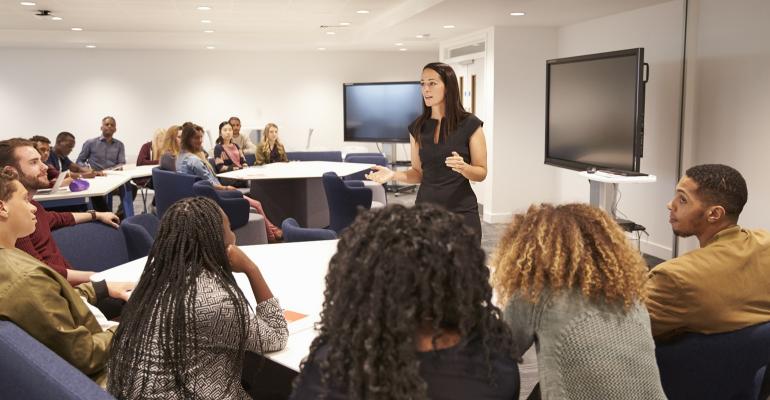 While there is broad agreement that universities are doing a good job, areas for improvement include preparedness for hot tech areas and more support for internship programs.

The tech talent crunch is impacting organizations of all sizes. The lack of qualified IT specialists is a rising concern with no end in sight.

Taking into account accelerated retirement plans of the Baby Boomers and the “great resignation” spurred by the pandemic, tech companies will be even more reliant on the upcoming generation of university graduates to fill the ranks of data specialists, AI experts, and software engineering pros.

Josh Drew, Boston regional director at Robert Half, a staffing and talent solutions company, says he regularly sees first-year computer science graduates take job opportunities in the development space with salaries ranging from $90,000 to north of $100,000.

“If you look at the opportunities of coming directly out of school and the skillset they leave with, I think there is a clear indication the university formula is working,” he says.

He added that the pandemic, which forced almost all university students into a totally virtual learning space, has also prepared them for the more flexible, part-time remote work.

“They've been doing online classes instead of turning their assignments into teachers -- they're uploading it and hosting it on sites, sharing through Google or Slack,” Drew says. “The model fits well with the hybrid workplace in the sense that it's not always on-site turning in hard work -- it's working in a virtual world or outside of the classroom.”

However, there is some concern that the most in-demand skills are not being taught and that they aren’t providing graduates with soft skills like communications.

Catherine Southard, vice president of engineering at D2iQ, says her company hasn’t had much success finding new grads with experience in Kubernetes and the Go programming language, in which D2iQ’s product is primarily developed.

“Part of that is because the tech landscape changes so quickly. It would be great for a representative from tech companies -- maybe a panel of CTOs -- to sit down with curriculum developers every couple of years and talk through industry trends and where technology is headed, and then brainstorm how to bridge the gap between university and industry,” she says.

Southard added something students can do is research jobs that look interesting, then see what tech stack those companies are using. They can then equip themselves to land those jobs by studying up on that technology by using free resources online or taking courses.

She sees another area of improvement in support for internship programs. Historically, D2iQ had a program in the US, but it was expensive to operate, and it didn't lead to long-term employee retention, except for a couple of stand-out talents.

She noted larger tech companies can sponsor internship programs, but for startups, Southard would like to see universities splitting some of the operating costs as an investment in their students.

“We have had success hiring student workers in our German office, and that is an excellent setup for all involved,” she says. “We get smart, motivated students, the students get real-world experience, and our engineers can focus on more challenging problems as the students are able to perform more basic tasks.”

She explained a lot of people looking to change careers participate in code camps lasting a couple of months. These camps give them the necessary skills to hit the ground running as developers: Universities might do well to look at what those programs are doing and create a similar curriculum.

“A four-year degree is great, and there are lots of benefits to it, but it's really not required anymore to be a developer,” Southard points out. “Universities should make sure their graduating students are as immediately employable as code camp graduates.”

Drew pointed out that in the Boston area, he’s seen the growth of these code camps, as well as different academies and even school contests geared around topics like ethical hacking.

“More than ever, the curriculum within the IT space is definitely like real-world applications,” he says.

He’s seen the development of e-commerce and entrepreneurial kind of programs where students are building and developing products to sell on websites.

“They’re bridging the gap with soft skills and teamwork, collaborating with others and often in a virtual environment,” Drew says.

Southard also notes that most physical science students will only have a few required English courses, and no communication courses, but success in the workplace will come down to their attitude and their abilities to collaboratively solve problems and communicate clearly.

“If universities could have a peer review process on programming assignments using standard industry tooling such as Github, that would help build some of these skills and better prepare students for their career,” Southard says.

From the perspective of Kevin Chandra, the Gen-Z co-founder and CEO of Typedream, his university experience at University of Southern California adequately prepared him for a career in the real world.

“Our universities teach us the fundamentals of computer science; the reason that they do this is because technologies change very quickly,” he says. “If universities were to teach industry-standard technologies, by the time you graduate it will all have changed.”

Chandra says what he thinks is currently lacking in universities is providing IT students with more exposure to the tech community.

“I have learned from Twitter, Substack blogs, and podcasts about relevant trends, technologies, and marketing strategies much more than I could ever have from outdated books,” he says. “I wish universities invited thought leaders to lecture students at universities.”

Mohit Tiwari, co-founder and CEO at Symmetry Systems, agreed with Chandra that universities excel at teaching young IT professionals the type of fundamental technical skill sets that can set students up for decades.

“For example, students trained in programming languages, distributed systems, and data engineering can now work on critical infrastructure problems like privacy and cloud security,” he says.

More broadly, universities are also a critical staging area before the students are launched into production.

“The goal is providing those students with a safe place to make mistakes and learn in a cohort with mentors to help, and not to load them with every skill they will need for 30 years,” Tiwari added.

Tiwari says he thought tech companies could do a better reaching out to IT students or form relationships with higher education institutions by creating open-source testbeds that reflect real-world deployments that students can use as projects.

Chandra says he felt big tech companies, especially in the US, do a good job reaching out to university grads by providing internship opportunities starting from freshman year.

However, he adds that when he entered the industry, he also realized there are so many unconventional doors to break into tech.

“I wished I had learned and known ways on how to be connected to the tech community on Twitter,” he says. “I didn’t know that it was possible to get a job without multiple rounds of interviews, raise funding within a week, and get customers all from Twitter DMs.”