/sites/all/themes/penton_subtheme_itprotoday/images/logos/footer.png
Recent
Recent
To the Test: Extreme Hard Drive Disposal Methods
Jul 04, 2020
Solving the US Data Center Renewable Energy Puzzle
Jun 30, 2020
How the Pandemic Has Forced a New Normal in the Data Center
Jun 30, 2020
Open Source NAS Update: As Much about Development as Storage
Jun 30, 2020
FinOps Foundation Brings New Focus to Cloud Costs
Jun 30, 2020
Featured
Make Remote Working Work for the Enterprise
Oct 09, 2019
Windows 7 to 10 Migration Tools Buyer’s Guide
Jun 17, 2019
5 Key IT Skills for the New Decade
Jun 27, 2019
Is the DevOps Model Killing the Developer? In a Word, No
Jun 29, 2020
Desktop-VDI
brought to you by 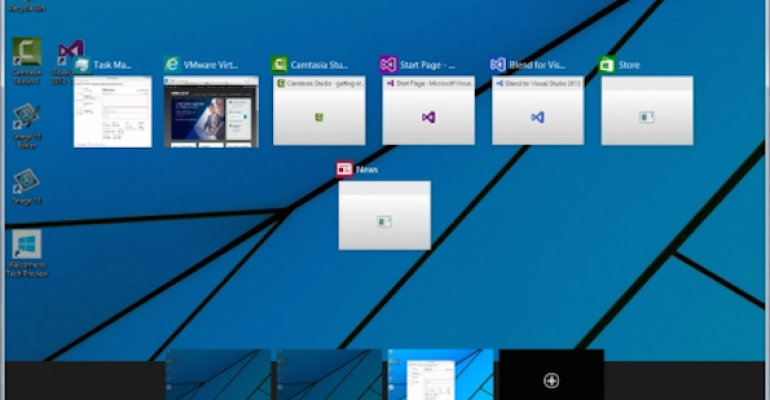 It&#39;s not VDI, but a feature in Windows 10 might be the perfect &quot;training wheels&quot; on the way to virtualized desktops.&nbsp;

News Flash: Windows 10 supports virtual desktops, right out of the box, with no need for additional software or servers!

It's true, but it's not the sort of virtualization an IT manager might be thinking of. But it's still a cool Window 10 trick that more people should know about, whether they are using the operating system in a physical or virtual setting.

And it serves as a sort of introduction to one aspect of "real" desktop virtualization, which may well be where you want to end up. It might come in useful when conditioning users for an upcoming change or pitching the bosses on the value of true virtual desktop infrastructure.

Here's how to use it.

There is an icon called "Task View" in a Windows 10 taskbar. It's a rectangle sitting on top of another rectangle; you might mistake it for a printer icon.

Click the icon, and you'll see all the active programs in your current Windows session. Power users will recognize this as something like the "Alt + Tab" feature of earlier versions of Windows, which let you easily cycle through running programs. Task View goes one step further; unlike Alt + Tab, the windows don't disappear when you stop pressing the keys.

But the real power of Task View is how it lets you switch to an entirely different set of running programs on a second (or third, or fourth) virtual desktop that you have created. Press Task View, and you'll see "New Desktop" in the lower right corner. Click on it, and you get a blank desktop, which you can then start filling with the program of your choice. That allows you to have one desktop full of, say, spreadsheet-oriented software, and another with programs for graphics.

You can add as many as you want; to switch among them, click Task View and then the desktop you want to go to. Adding, deleting and changing virtual desktops is easy ... so much so that it might help get your team, your users and your bosses thinking about adding virtualized desktops for real.