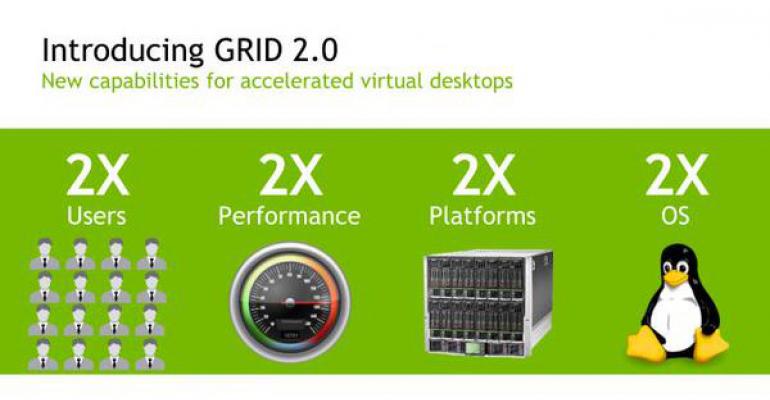 Virtual graphics processors for blade servers were one of the bigger pieces of news from last week&#39;s massive VMworld show in San Francisco.

Of the many hardware advances in enterprise computing during recent years, two have been especially noteworthy. One is the blade server form factor, which greatly increased the amount of computing power that can be squeezed into a given amount of space by allowing datacenters to stack a row of servers like books on a library shelf.

The second is the virtual-graphics processing unit, which allows a group of virtualized desktops to each have workstation-caliber graphics performance, even while sharing the same pool of servers.

Now, those two paths have crossed. Virtual graphics processors for blade servers were one of the bigger pieces of news from last week's massive VMworld show in San Francisco.

The product family is the result of heavy-duty semiconductor design work by NVIDIA, widely regarded as the pacesetter in specialized graphics processing chips, and sophisticated system integration work by HP, consistently ranked as the leader in enterprise hardware.

NVIDIA's has been selling its GRID line of VDI graphics processors since 2012, but until last week, the units were board-level products designed for traditional rack-mounted servers. They brought significant advantages to VDI users, since for the first time, graphics processing could be shared among many different virtual machines.

The GRID 2.0 units announced last week are based on NVIDIA's new Maxwell line of processors, and offer double the performance of the company's first generation. Most significantly for blade enthusiasts, they are now available in the extremely compact MXM form factor that was originally designed for laptops and has migrated to blades and the datacenter.

HP announced that it will offer up to four of the new chips on a single blade, more than any other vendor.

Another advantage of GRID 2.0: It can support Linux desktops. The earlier version was Windows-only.

Virtualized desktop infrastructures are seen as an important growth opportunity for both HP and NVIDIA, and the companies said the new products will allow companies to bring VDI to an even larger group of desktop workers.

Jeff Carlat, director of Converged Systems Product Management at HP, said that with the rise of video and the Internet, graphics have become crucial for all knowledge workers, not just those using traditionally graphics-intensive engineering or design software.

"Richer graphics are necessary for businesses of all sorts; they have become a key part of unlocking a company's competitive advantage," he said. With its new offering, he said, HP "will be providing a great graphical experience at a lower cost per seat, and delivering it to CIOs with less risk and at a lower cost."