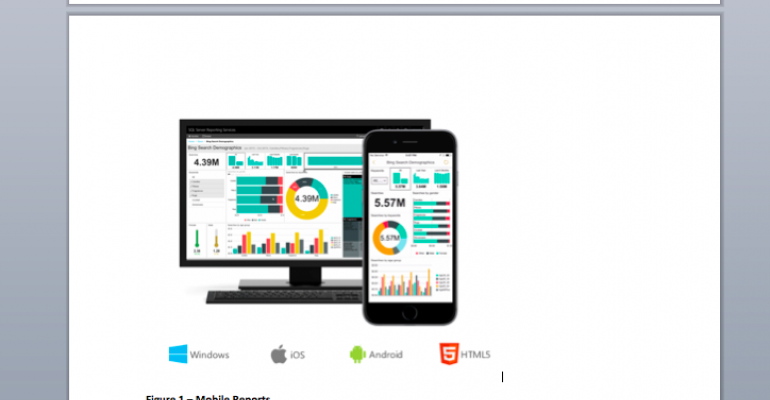 Behind the scenes there’s a new HTML5 rendering engine that enables Reporting Services to display reports more consistently and correctly across a range of browsers, including Edge, Chrome, Firefox and Safari Printing. Some of the more noticeable new features include support for mobile reports, new report pagination support and a new web portal. Here, we drill down into those features.

Without a doubt, the most important new feature in SQL Server 2016 Reporting Services is support for mobile reports.

The consumerization of IT has been a huge trend, and most businesses are dealing with support for various BYOD (Bring Your Own Device) strategies. According to an IDC U.S. Mobile Forecast, 70% of U.S. workers are mobile. In the coming years, this number is only expected to increase, along with the number of mobile devices in use. Businesses needed a way to surface their enterprise data to these mobile devices.  Microsoft acquired Datazen and incorporated its mobile reporting technologies into SQL Server 2016. SQL Server 2016’s mobile reports run natively on Windows, iOS, Android and HTML 5. Further, there are several customizable layouts for different form factors. The report designer provides a visual drag-and-drop palette for creating interactive data visualizations, as well as for enabling users to quickly build prototypes with simulated data. Mobile reports can access enterprise data sources by connecting with Reporting Services. An example of SQL Server 2016’s mobile reports is shown in Figure 1.

SQL Server 2016 Mobile Reports provides one mobile app for Power BI and SSRS mobile reports. It has a native mobile experience that is optimized for touch, as well as the ability to keep mobile data refreshed with real-time queries or periodic scheduled data refreshes. Users can also work with mobile reports even when they are disconnected. The new SQL Server Mobile Report Publisher enables users to create and publish SQL Server mobile reports to the new Reporting Services web portal.

Reporting Services 2016 also supports new paginated reports. Report Builder has been updated with a more modern and streamlined user interface. There’s support for new chart and gauge styles, including Treemap and Sunburst chart types. There is also support for pinning report items to Power BI dashboards. You can pin gauges, maps, pin charts and images as tiles to Power BI dashboards with the ability to drill through to source reports. You can export PowerPoint presentations from paginated reports. The printing experience has also been updated. You no longer need ActiveX add-ins in order to print. Reporting Services 2016 now has a modern PDF-based printing capability that works across a multiple browsers.