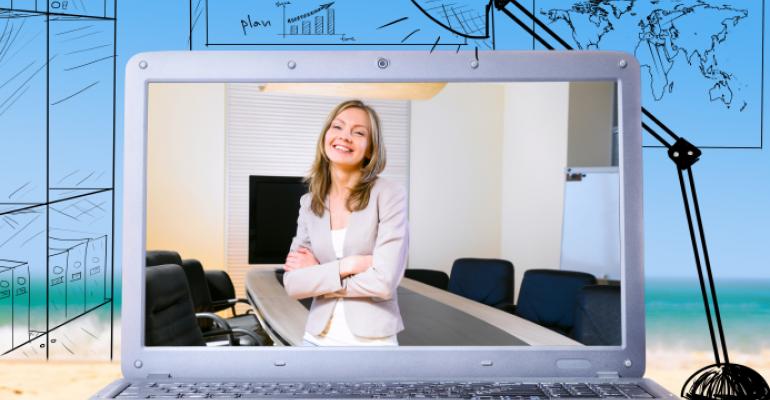 Most organizations these days have mobile workforces, regardless of their size. But with mobility comes the responsibility to recognize (and prepare for) associated security issues. Our IT security contributor can help you understand the mobile security equation.

There are countless benefits to having employees work remotely on laptops. But sometimes, organizations don’t fully account for the downsides of a mobile workforce—especially when it comes to calculating the costs of securing those laptops.

First, let’s review some of the most important benefits of a laptop-empowered workforce.

* Improved productivity. Remote employees tend to squeeze in four more hours per week on average than office-bound colleagues, a Gallup study found. A separate study, conducted by a Chinese travel website of its own call-center workforce, found that remote employees completed 13.5 percent more calls than co-workers in the office, the Harvard Business Review reported.

* More flexibility = happier employees, especially Millennials. An estimated 80 to 90 percent of the U.S. workforce would like to ‘telework’ at least part-time, according to Global Workplace Analytics. Despite the growth of mobile devices, laptops are still the best tool to enable workers to be fully productive from just about anywhere.

Millennials emerged last year as the largest living generation in the U.S., according to The New York Times. At the same time, this age group really wants the flexibility to work anywhere. According to the Harvard Business Review, 92 percent of Millennials want more freedom to work where and when they want. In other words: This is a workforce demographic whose needs are well worth considering.

* Cost savings. Businesses can reduce office leasing and supply costs by offering non-assigned desks to remote employees when they’re in the office, vs. assigning space to them full-time. BYOD policies, in which employees use their own laptops and mobile devices, can also lower an enterprise’s hardware expenses.

* Reduced productivity dips due to bad weather. Working from home means employees can stay productive when snowstorms, driving rain, or other inclement weather would have otherwise prevented them from coming into the office.

* Better prepared for the unexpected. Even if the main office flooded, burned, or is otherwise out of commission due to an unplanned event, remote workers—providing they aren’t similarly affected—can continue to be productive.

OK, that’s the good news. Here’s the flip side of the coin.

* One stolen laptop can cost the organization $49,000 or more. According to Kensington, which makes laptop cable locks, one portable computer is stolen every 53 seconds. The study found that 52 percent of stolen laptops were heisted at the office and 24 percent were nabbed at conferences.

Airports are often the scene of the crime, too. U.S. airports have reported close to 637,000 laptops lost every year, PC World reports, and 65 percent of them aren’t recovered. Other common places from which laptops are stolen include hotels and parked cars.

The loss of the laptop’s costs is the least of your worries. There’s also lost productivity and additional IT support required. Plus, there are the loss of intellectual property, the increased potential for data breaches, and even possible legal fees due to lost data protected by government regulations. Kensington estimates the loss of a single laptop can actually exceed $49,000.

* Insecure wireless access points can expose your organization to hackers. Whenever a company laptop is taken beyond the secure network perimeter, it’s more vulnerable to criminal hackers, especially when the laptop is used at coffee shops, in hotels, or other public places where security is lax. The long list of security risks the laptop user can be exposed to includes, most recently, ransomware attacks.

Per year, hacking attacks cost the average U.S. enterprise a staggering $15.4 million, more than twice the global average of $7.7 million, according to a report conducted by the Ponemon Institute of Cyber Crime.

How to Reduce or Eliminate Hidden Security Costs

* Educate users to be more vigilant. Keep users aware of risks and teach them proactive steps to take. For example, train employees to place laptops last on the airport scanner belt, after their personal items. That way, users are more likely to have passed through the X-ray when their laptop emerges and can grab them quickly.

* Buy laptops with self-encrypting drives and BIOS-level security. Some business-class notebooks feature security features built into the computer’s firmware and hardware, adding a strong layer of protection that goes beyond what installed software, such as anti-virus programs, can achieve. For more on this, see my earlier post, Security Features to Look for in New Laptops.

* Train the workforce to use VPNs and 2-factor authentication, along with remote wiping of stolen laptops, remote device management, and access control monitoring.

I’ll wrap up with words of advice from none other than the U.S. Homeland Security department, which suggests we think of a laptop as the equivalent of a cash pile. In a laptop security blog post, the department rhetorically asked: “If you had a wad of money sitting out in a public place, would you turn your back on it—even for just a minute? Would you put it in checked luggage? Leave it on the backseat of your car? Of course not.”