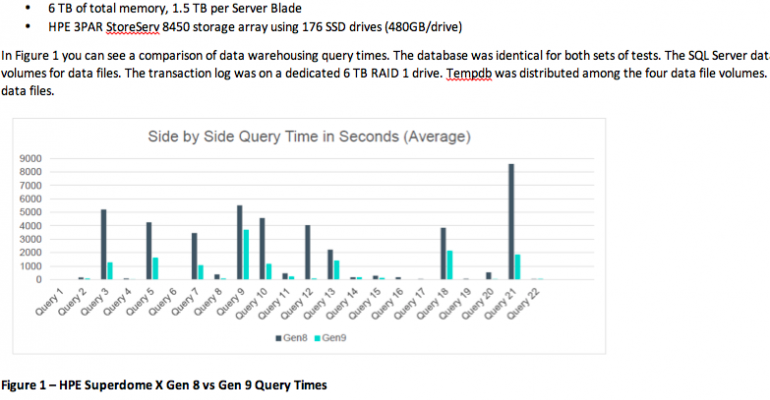 The HPE Superdome X, first released in December 2014, is intended to run resource-intensive mission-critical workloads such as SQL Server 2016, as well as server consolidation platforms like Windows Server 2016 Hyper-V and VMware vSphere virtualization.

HPE designed the Superdome X line as an enterprise-class server platform from the get-go, and the company has continued to evolve the system ever since. For example, the new Gen 9-based Superdome X provides significant performance increases over the Gen 8 version.

The HPE Superdome X, first released in December 2014, is intended to run resource-intensive mission-critical workloads such as SQL Server 2016, as well as server consolidation platforms like Windows Server 2016 Hyper-V and VMware vSphere virtualization. While the Superdome X is an x86 server, it’s a descendent of the HPE Superdome 2 Integrity server, which pioneered hardware partitioning and built-in reliability-availability-serviceability (RAS). However, the HPE Superdome 2 was built around the Itanium chip and runs HP-UX. The new GEN 9 HPE Superdome X uses the latest Intel Xeon E7 v3 CPU, and it brings those same enterprise capabilities to the x86 world.

HPE did a comparison of reference configurations that clearly illustrate the performance enhancements in the HPE Superdome X Gen 9.

The HPE Superdome X Gen 9 configuration was a follows:

In Figure 1 you can see a comparison of data warehousing query times. The database was identical for both sets of tests. The SQL Server database configuration used four 12 TB logical volumes for data files. The transaction log was on a dedicated 6 TB RAID 1 drive. Tempdb was distributed among the four data file volumes. The database was split into 240 separate data files.

In Figure 1 you can see that the average performance improvement between the Gen 8 and Gen 9 data warehousing queries was about 56%. The combination of the HPE Superdome X Gen 9 and HPE 3PAR StoreServ 8450 storage array dramatically improved the overall performance for long-running queries. The Gen 9 has six more cores per blade server, and the cores are faster. In addition, the all-flash StoreServ 8450 storage array showed significant performance improvements over the 7440c array used with the Gen 8 configuration.

HPE is rapidly evolving the Superdome X platform. The Superdome X provides very high CPU and memory capacity, and is able to support the most demanding workloads--ranging from high-end OLTP CPU-intensive transaction processing to I/O and memory-intensive data warehousing environments. The HPE Superdome X brings true enterprise-level reliability to the x86 platform, and it is flexible enough to support mission-critical database workloads, as well as Hyper-V and VMware vSphere virtualization for server consolidation.