/sites/all/themes/penton_subtheme_itprotoday/images/logos/footer.png
Recent
Recent
The Dunk Tank Reconsidered: How OCP May Yet Immerse Your Servers
May 27, 2020
The End of Open Source Python 2: What It Means for Enterprises
May 24, 2020
Huawei Is Back with New OceanStor Storage Products
May 23, 2020
Flexibility, Cost Drive Microsoft Cosmos DB Improvements
May 23, 2020
Why a Special Purpose CPU May Be in Your Storage Future
May 23, 2020
Featured
Make Remote Working Work for the Enterprise
Oct 09, 2019
Windows 7 to 10 Migration Tools Buyer’s Guide
Jun 17, 2019
5 Key IT Skills for the New Decade
Jun 27, 2019
Virtual Microsoft Build Event Progresses All-Digital Format
May 22, 2020
Desktop-VDI
brought to you by 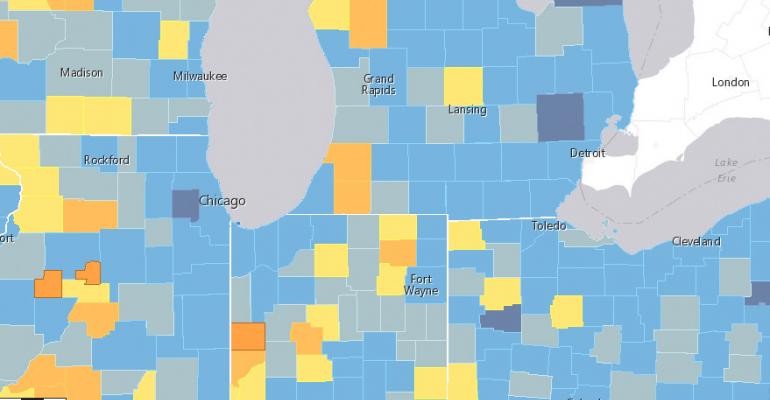 Esri Maps the Way to Virtual Desktops for Complex Tasks

Few power users of computer graphics are more demanding than professional cartographers and planners in the world of Geographic Information Systems. Theirs is the sort of high-end, graphically intense application that, for many users, is not ordinarily associated with desktop virtualization. &nbsp;But that&#39;s changing, fast, with the introduction of graphics processors for VDI servers.&nbsp;

Few power users of computer graphics are more demanding than professional cartographers and planners in the world of Geographic Information Systems. Their complex 2D and 3D renderings of the world are one part Google Maps, one part video game and one part CSI television show.

GIS is the sort of high-end, graphically intense application that, for many users, is not ordinarily associated with desktop virtualization; typical GIS users often believe that the graphical performance of a virtual machine can't possibly be of the high end, workstation caliber they demand.

John Meza, the performance engineering team leader at Esri, said that might have been true in years past, when the back-end servers used in a VDI installation simply couldn't keep up with a GIS power user. But that has changed dramatically with the introduction of graphical processor units made specifically for virtualized environments; NVIDIA's GRID is the best known of this new breed of products.

These bring the well-known performance advantages of massively parallel Graphical Processing Units, long a staple on desktop computers, to a virtualized environment. As a result, says Meza, GIS users are beginning to show the same interest in virtualization as the rest of the computing world, attracted by the same list of features, notably lower administrative costs and reduced power bills.

Esri, based in Redlands, Calif., is as common in the cartography world as Windows is in the office. The company, in fact, is often called the "Microsoft of Maps." It has more than a million users worldwide, and the 2014 edition of its annual customer show drew 16,000 people.

Meza might be regarded as "Mr. Virtualization" at Esri; he represents the company at virtualization and GPU-oriented trade shows, and he leads internal efforts to help it and its customers make the transition to the new world of VDI. A typical assignment might be to work with a virtualization-minded customer to make sure that they've properly scaled their data center in advance of a major Esri software upgrade.

The company's new ArcGIS Pro product fully supports virtualized GPUs. Meza said that when back-end servers have been properly configured, including the needed extra graphical support, Esri users on virtual machines have "a game-like experience. You can pan and zoom, and everything is smooth and fluid."

That might not always have been the case, he admitted; some early GIS-based VDI installations might have skimped on server support, simply repurposing old hardware and assuming it was capable of doing the job. That attitude, he said, remains more common than it should be, with IT managers not realizing that a robust VDI environment needs modern hardware.

"I often have to tell people that their five-year old hardware won't deliver the highest user experience," he said. "Customers don't need to buy the most extravagant systems out there, just the sort of typical data center hardware that is commonly available. It will last them many years into the future, and even with the initial capital cost, virtualization still ends up being less expensive."

Meza added that he is cutting IT managers a lot of slack as they adapt to the requirements of a VDI world. "This is relatively new stuff, and they need guidance," he said. "Our goal at Esri is to give them that guidance."

Working out the Kinks

Meza added that in addition to getting customers to upgrade their servers, Esri discovered there were a few kinks in its own code base that needed to be ironed out before the software could really roar in a VDI environment. "There were a few glitches we found dealing with virtualization, but we've gone the extra mile to deal with them. We want to be sure that our software is enterprise-ready, and today being enterprise-ready means that the software can be virtualized."

VDI at Esri doesn't only involve customers; the company itself has more than 1,000 virtualized desktops, a growing number of them in the cubicles of power users in testing and engineering.

In his work inside Esri as well at customer sites, Meza has become familiar with the personality profile of demanding users who refuse to accept any compromises, real or imagined, in their computing environment. He said that IT managers would be well-advised to concern themselves instead with the needs of the average users, those who simply want to get their work done and will take to any system that lets them do so.

"You can't worry about really crabby developers," he said, "because they are going to still be really crabby even if you got them a supercomputer."