/sites/all/themes/penton_subtheme_itprotoday/images/logos/footer.png
Recent
Recent
What Is Data Backup?
Nov 16, 2021
Trending Tech to Watch: Software Bill of Materials (SBOM)
Nov 12, 2021
What Is AIOps?
Nov 09, 2021
Data Lakehouse and Data Hub: Going Beyond Just Data Storage
Nov 09, 2021
Biden Administration, Allies Unleash Attack on REvil Ransomware
Nov 08, 2021
Featured
IT Pro Salary Survey: What You Earned in 2020
Jul 09, 2021
Cloud Cost Optimization: Best Practices for IT Pros
Jul 15, 2021
PowerShell 101: A Technical Explainer for IT Pros
Jul 14, 2021
Edge Computing in the Enterprise Report
May 28, 2021
Scaling for Success with SQL Server in 2016
brought to you by 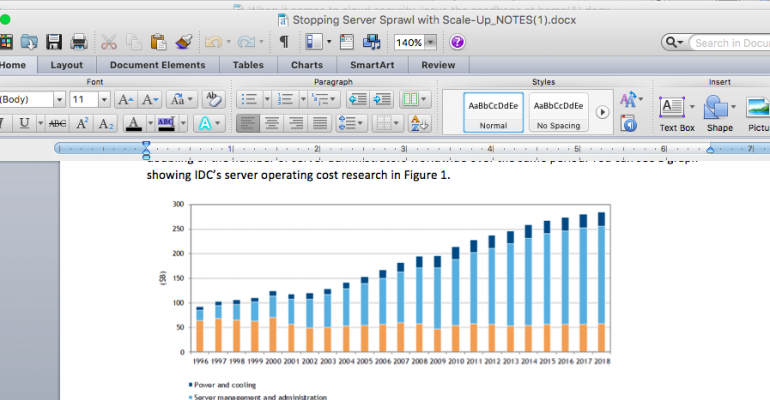 The HPE Superdome X provides the high-end scalability and workload partitioning capabilities that enable it to effectively put a halt to server sprawl.

Server sprawl and virtual server sprawl are two of the main problems enterprises face today. Virtualization makes it easy--sometimes too easy--to deploy new servers. Plus, with Hyper-V built in to both Windows Server and Windows 10, it’s very easy for end users and shadow IT to create more virtualization hosts than you may think you have. Deploying too many servers increases the administrative overhead on your IT department. Plus, server sprawl can result in poor hardware resource utilization, poor system and software level security, and excess energy and cooling requirements. The more servers a company has, the higher the electrical and cooling costs—not to mention the increased requirements for floor space and networking. On the surface, small-scale server deployments for departmental or branch offices to support new applications may seem inexpensive. However, each new added server multiplies these costs.

Even virtual machines (VMs) have associated OpEx costs. Every VM needs to be provisioned, managed, backed up and protected with a disaster recovery strategy. IDC estimates that since the start of x86 server virtualization in 2004, VM deployments have increased almost 100-fold. This has resulted in a doubling of the number of server administrators worldwide over the same period. You can see a graph showing IDC’s server operating cost research in Figure 1.

Figure 1 – Server operating costs: Here you can see how operating costs have continued to climb over the years, and that server management and administration make up the bulk of those costs.

The HPE Superdome X provides the high-end scalability and workload partitioning capabilities that enable it to effectively put a halt to server sprawl. The HPE Superdome X uses an advanced x86 architecture that is scalable from two to 16 sockets with support ranging from eight to 384 cores. The HPE Superdome X also supports up to 24 TB of memory that can be divided into multiple partitions. This means you can have up to two 12 TB Windows Server 2016 instances on one HPE Superdome X, providing extreme scalability with the ability to consolidate multiple virtualization hosts. To complement its advanced CPU and memory capabilities, the HPE Superdome X utilizes four fully independent memory channels on each CPU socket. All of the memory channels run in parallel, providing up to 800 GB of aggregate bidirectional I/O bandwidth to keep pace with its CPU and memory demands.

The HPE Superdome X’s hard partitions (nPars) capability allows one HPE Superdome X server to effectively act as if it were separate servers—each totally independent and electrically isolated from the other. This level of in-box isolation enables you run different workloads types in different partitions without impacting the workloads in other partitions--just as if you were using multiple servers but without the administrative overhead. For instance, you could run a SQL Server set of OLTP workloads in one partition and a set of data warehousing and BI workloads in another partition, and they would not degrade one another. nPar enables organizations to streamline IT operations by reducing the number of required servers to support diverse workloads, which, in turn, reduces power and cooling requirements and can also potentially reduce licensing costs.

HPE and Microsoft are the underwriters o