/sites/all/themes/penton_subtheme_itprotoday/images/logos/footer.png
Recent
Recent
Microsoft Productivity Tools Get New Updates, Integrations
May 29, 2020
The Dunk Tank Reconsidered: How OCP May Yet Immerse Your Servers
May 27, 2020
The End of Open Source Python 2: What It Means for Enterprises
May 24, 2020
Huawei Is Back with New OceanStor Storage Products
May 23, 2020
Flexibility, Cost Drive Microsoft Cosmos DB Improvements
May 23, 2020
Featured
Make Remote Working Work for the Enterprise
Oct 09, 2019
Windows 7 to 10 Migration Tools Buyer’s Guide
Jun 17, 2019
5 Key IT Skills for the New Decade
Jun 27, 2019
Why a Special Purpose CPU May Be in Your Storage Future
May 23, 2020
All About Converged Architecture
brought to you by 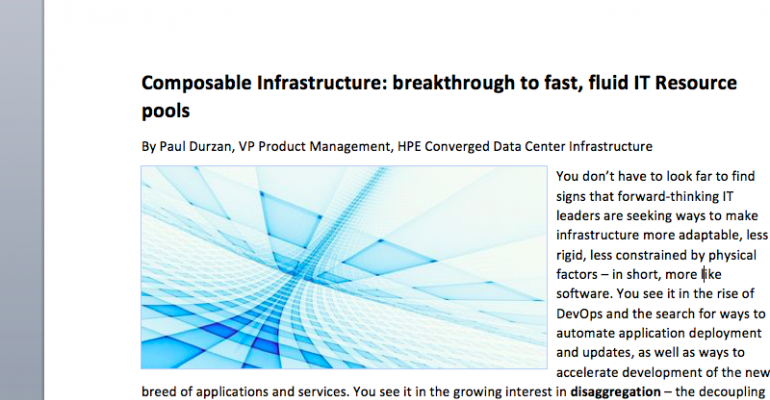 One of the things that&rsquo;s needed to build this more flexible data center is a way to&nbsp;turn hardware assets into fluid pools of compute, storage and fabric resources.&nbsp;

You don’t have to look far to find signs that forward-thinking IT leaders are seeking ways to make infrastructure more adaptable, less rigid, less constrained by physical factors--in short, more like software. You see it in the rise of DevOps and the search for ways to automate application deployment and updates, as well as ways to accelerate development of the new breed of applications and services. You see it in the growing interest in disaggregation--the decoupling of the key components of compute into fluid pools of resources.

As I wrote in my blog "Gear Up for the Idea Economy with Composable Infrastructure," one of the things that’s needed to build this more flexible data center is a way to turn hardware assets into fluid pools of compute, storage and fabric resources.

The Many Virtues of Disaggregation

You can achieve significant efficiencies in the data center by disaggregating the components of servers so they’re abstracted away from the physical boundaries of the box. Think of it this way: Today, most organizations are essentially standardizing form factors in an attempt to minimize the number and types of servers. But this can lead to inefficiencies: You may have one application that needs a lot of disk and not much CPU, and another that needs a lot of CPU and not a lot of disk. By the nature of standardization, your choices are limited by form factors. Basically, you have to choose small, medium or large. So you may end up buying two large boxes, even though some of the resources will be excess to the needs of the applications.

But now imagine if you could assemble those stranded or unused assets into pools of resources that are easily available for applications that aren’t running on that physical server. And imagine if you could leverage software intelligence that reaches into those pools and pulls together the resources into a single, optimized footprint for your applications. Add to that a unified API that delivers full infrastructure programmability, so that provisioning and updates are accomplished in a matter of minutes.

Now you can eliminate overprovisioning and silos, and significantly increase your ability to scale smoothly and easily. Infrastructure management is simplified, and the ability to make changes rapidly and with minimum friction reduces downtime. You don’t have to buy new infrastructure to accommodate an imbalance in resources, so you can optimize CAPEX. And you’ve achieved OPEX savings, too, because your operations become much more efficient and you’re not spending as much on power and cooling for unused assets.

An Infrastructure for Both IT Worlds

This is exactly what a true composable Infrastructure does. It provides a single infrastructure that composes physical and virtual compute, storage and fabric pools into any configuration for any application. And it simplifies ops for traditional workloads while at the same time accelerating IT for the new breed of applications and services. By doing so, composable infrastructure enables IT to bridge the gap between the traditional ops-driven and cost-focused ways of doing business, and the apps-driven, agility-focused IT that companies need to thrive in the Idea Economy.

You can read more about how to make this happen with HPE Synergy, the industry’s first infrastructure built from the ground up for true composability, here. And here’s where you can learn how Composable Infrastructure can help you achieve the speed and agility of cloud giants.