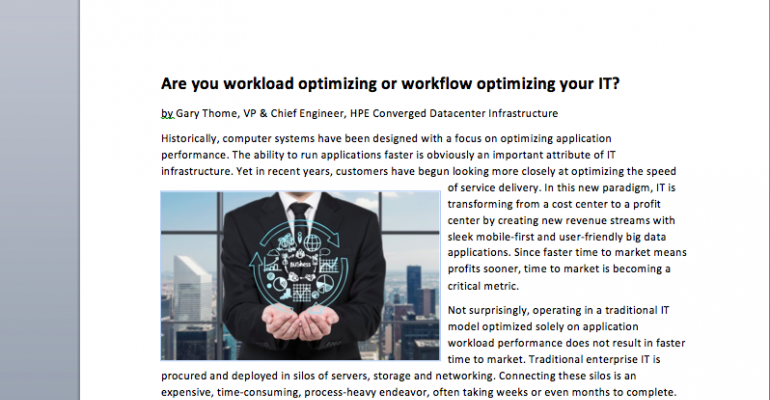 Operating in a traditional IT model optimized solely on application workload performance does not result in faster time to market.&nbsp;Traditional enterprise IT is procured and deployed in silos of servers, storage and networking.&nbsp;Connecting these silos is an expensive, time-consuming, process-heavy endeavor--often taking weeks or even months to complete.

Historically, computer systems have been designed with a focus on optimizing application performance. The ability to run applications faster is obviously an important attribute of IT infrastructure. Yet, in recent years, customers have begun looking more closely at optimizing the speed of service delivery. In this new paradigm, IT is transforming from a cost center to a profit center by creating new revenue streams with sleek mobile-first and user-friendly big data applications. Since faster time to market means profits sooner, time to market is becoming a critical metric.

Not surprisingly, operating in a traditional IT model optimized solely on application workload performance does not result in faster time to market. Traditional enterprise IT is procured and deployed in silos of servers, storage and networking. Connecting these silos is an expensive, time-consuming, process-heavy endeavor--often taking weeks or even months to complete.

If you’re not sure whether your business thinks about IT in the traditional model, just look at your metrics. Are they based primarily on reducing costs? Or do your IT metrics track how quickly new applications are getting to market? A change in metrics will lead to changes in process that align better with achieving the speed at which businesses want to run. Ultimately, changing the way you measure your business will also require a change in technology.

Composable infrastructure is optimized for speed of service delivery. Composable Infrastructure can be deployed all at once, rather than in disparate silos, and can also be provisioned instantaneously. As a result, applications can be delivered to market as quickly as your business desires.

Another benefit of a composable infrastructure is the capability to automate not just initial service delivery, but many of the ongoing maintenance tasks. Together, these two activities would otherwise consume the bulk of most traditional IT budgets. It is this same automation that also makes composable infrastructure well-suited for private cloud and DevOps environments.

At HPE, we are convinced that composable infrastructure is absolutely the right approach for the future of IT infrastructure. To learn more about the industry’s first infrastructure built from the ground up for true composability, HPE Synergy, click here.