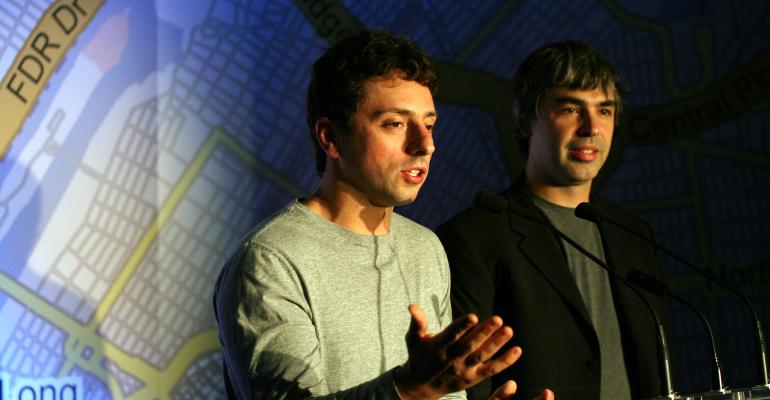 Sundar Pichai, the CEO of Google, will also run Alphabet, the company said on Tuesday. The transition gives Pichai oversight of the conglomerate’s vast array of expensive, futuristic endeavors, such as autonomous cars and new health-care technology.

Sundar Pichai, the CEO of Google, will also run Alphabet, the company said on Tuesday. The transition gives Pichai, who has led Google since 2015, oversight of the conglomerate’s vast array of expensive, futuristic endeavors, such as autonomous cars and new health-care technology. Page and Brin will still be controlling shareholders and stay on the board.

“We are deeply committed to Google and Alphabet for the long term, and will remain actively involved as board members, shareholders and co-founders,” Page and Brin wrote. “In addition, we plan to continue talking with Sundar regularly, especially on topics we’re passionate about!”

Alphabet shares rose almost 1% in extended trading on Tuesday. The stock closed at $1,294.74 in New York, leaving it up about 24% so far this year.

In 2015, Google reorganized into the Alphabet holding company, and Page and Brin stepped back by naming Pichai CEO of Google. Page has been criticized for not engaging more as Google’s growing power has sparked scrutiny from regulators and lawmakers. Promoting Pichai to lead Alphabet may address some of these concerns.

“The next chapter is going to be a lot around policy and data privacy and regulation,” Gene Munster, an analyst with Loup Ventures, told Bloomberg TV. “If you think about the founders and what they’ve accomplished and what the next couple of years would look like -- testifying for example and going through some of the minutia of that -- I am not surprised to ultimately see this.”

And appointing Pichai to lead both entities is a clear sign the founders believe in his abilities, Munster added. “If they didn’t have that then he would not be the one tapped for the broader role,” Munster said. “Even the greats move on.”

The changes are also an acknowledgment of what has been happening at the company in recent years. Pichai has been running Google, while bringing several Alphabet projects under his control. Pichai has also testified in Congress and handled most of the other controversies the company has faced recently, such as employee protests over military work and executive misconduct.

Page and Brin started their web search engine in 1998 from a research project at Stanford University, turning it into one of the largest and most-profitable businesses on earth. Page served as the first CEO before the board brought on Eric Schmidt to led the company from 2001 to 2011. Page returned as CEO after that and oversaw Google’s expansion into far-flung areas, including high-speed fiber internet service and longevity research, as well as expensive flops such as its push into social networking. Brin, meanwhile, oversaw the company’s skunkworks lab developing self-driving cars and the doomed Google Glass wearable tech.

But Page’s primary obsession has been artificial intelligence, which led to the acquisition of DeepMind, a pioneer in the AI field of deep learning. Those investments have solidified Google’s lead in the nascent technology. Pichai has embraced Page’s passion, using AI to improve the company main search and advertising businesses.

The Google founders will still control Alphabet through special voting shares. The company was one of the first prominent Silicon Valley firms to create a structure that gives insiders outsized power. Page and Brin currently control more than 50% of the votes, and a spokeswoman for Alphabet said the founders have no plans to sell their stock, beyond previously disclosed plans.