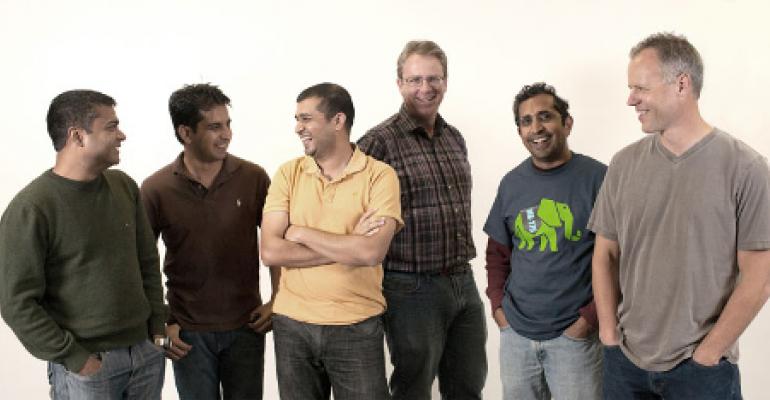 Hortonworks)
All members of Hortonworks founding team used to work on Hadoop and MapReduce development and deployment at Yahoo prior to 2011.
Data Analytics and Data Management>Big Data

Cloudera and Hortonworks, best known for being top enterprise Hadoop distributions, have agreed to merge • The combined company, they said, will bring to market an end-to-end enterprise data management solution • The solution will span customers’ own data centers, public cloud platforms, and edge locations • Cloudera stockholders will own 60 percent of the combined company; Hortonworks stockholders will own the rest

Cloudera and Hortonworks, which both have built big businesses by packaging Hadoop for the enterprise, have agreed to merge.

Open source Hadoop has been one of the most popular ways for companies to store lots of data for analytics. In recent years, however, big public cloud platforms’ storage and analytics services have outgrown Hadoop in popularity, leaving Hadoop distributions like Cloudera and Hortonworks struggling to grow market share.

As Bloomberg’s Shira Ovide pointed out this week, the terms of the merger value each company lower than its pre-IPO value. (Hortonworks went public in 2014; Cloudera in 2017.)

Hortonworks and Cloudera have addressed the increased competitive pressure on Hadoop by adding new capabilities, such as Apache Spark and support for public cloud storage services.

By merging, the companies hope, they’ll be able to bring to market an end-to-end enterprise data management solution that will be stronger than competitors’, while also saving some costs. They expect the transaction to result in $125 million in annual cost synergies. (Both lost money in the most recent full fiscal year.)

The combination will also cover a much wider variety of partnerships with data warehouse hardware makers, such as Oracle, Intel, IBM, and Teradata.

The combined company is expected to generate about $720 million in revenue from more than 2,500 customers.