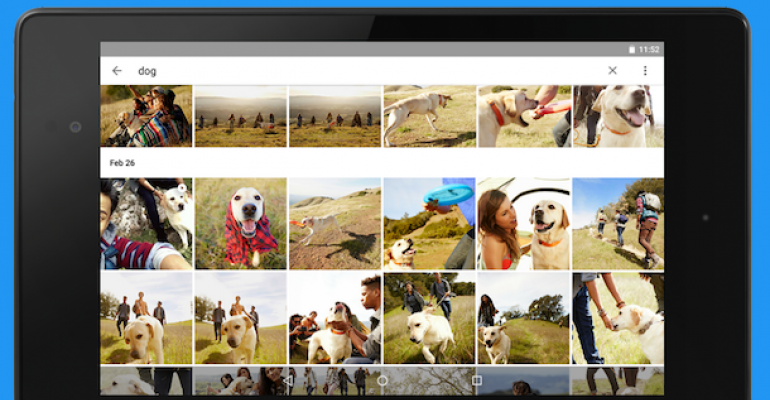 How To: Never Lose a Photo Again With the Right Cloud-Based Backup Tools

If you’re carrying around multiple SD cards and/or an external hard drive when you travel just to have a safe place for all your photos, it’s time to stop the madness.

There are so many good, cloud-based backup options now that unless you work for clandestine services or would rather keep local files of everything, there’s no reason not to go with the cloud.

But whose cloud should that be? That’s where we come in. Your best option is going to depend on your workflow and the other services that you tend to rely on. No matter how you get this done, it’s time to leap into the 21st century and partake of the advantages of putting your photos in one, easy-to-access place that you can get to from a smartphone, PC, or tablet.

We'll look at the four heaviest hitters below. Storage should continue to get cheaper as companies try to lure you into their ecosystem.

My personal favorite photo backup solution is Google Photos. It’s straightforward, cross-platform, and comes with a heavy dose of machine learning to help you find the right image.

There’s plenty of space to be had. If you’re not all that particular about the details of pixels, then you can opt for Google’s offer of unlimited storage for free. In exchange, however, you agree that the images will be compressed to save storage space. If you tend to only look at your images on a smartphone or tablet on occasion then this should probably be fine, as the differences will be negligible.

However, this won’t work if you’re a professional photographer or if you want to ensure that there won’t be any loss in image quality: full-size backups count against your Google Drive storage. You get 15GB for free to start, but that includes anything else you put in Drive and Gmail. Storage is cheap, however, as you can get 100GB for $2 per month or 1Tb for $10.

The best trick in the Google Photos toolbox (and there are many) is the image recognition. It can find faces, objects, animals, points of interest, and responses to many queries. You can assign the individual faces in your camera roll to contacts, so all you have to do is search for them by name.

Google Photos will recognize people in your images (once you assign them a name) so that all you have to do is search for pictures instead of scroll through the endless camera roll. The web interface is just as fluid and easy to navigate, so you’ll be able to quickly look for what you need no matter which device you’re on. There are also some basic editing tools, though you’ll still want a more dedicated app for more serious image manipulation needs.

BOTTOM LINE: Amateurs can use the Google service, but more serious users will want to keep looking.

MICROSOFT STEPS UP ITS PHOTO GAME WITH ONEDRIVE

Although the image recognition capabilities aren’t quite as strong as what you currently get with Google Photos, but they’re getting better all the time by putting in the research produced from growing Cortana and Bing. A recent update added a “Weekend Recap” that pulled together pictures from your getaway to the coast or outings with the kids.

OneDrive backup - Put that space to work if you subscribe to Office 365.

Another helpful factor is the app that photo backup is available across mobile and desktop - the Windows 10 photos app puts everything in a happy little home for all of your pictures.

BOTTOM LINE: While there’s always the caveat about all your eggs in one basket, the hefty about of space you get with Office 365 makes OneDrive a solid option.

Some people swear by Dropbox, and for good reason. Of all the backup solutions I’ve found it to be the quickest and most reliable. It lost a little luster in the photo game when the company shut down Carousel earlier this year, part of a strategy to cull services (this also included the popular email app Mailbox).

But that doesn’t mean that Dropbox has given up on images. Instead of a separate app, they’ve been re-integrated into Dropbox in a more meaningful way. It’s a pretty standard camera view, but you can use the 1TB of space you get with Dropbox Pro ($9.99 per month).

BOTTOM LINE: The cost of Dropbox gets a little hard to justify if you’re already paying for Office or other storage options, but with it you do get the fastest and some of the most reliable syncing around.

STRONGER PHOTOS ARE COMING TO ICLOUD

If you use an iPhone and Mac, there’s going to be more powerful reason to keep your images inside of Apple’s cloud. With macOS Sierra and iOS 10, Apple is bringing several Google Photos-type features, such as the ability to recognize people, places, and more. The app will also organize pictures into Memories, based around trips or other  And on the Mac you’ll have Siri, so you can ask questions like “show me my photos from yesterday” in order to quickly find what you want.

iOS10-Memories - The Photos app in iOS and macOS will be significantly more powerful in the near future.

The differentiator with Google is that Apple is trying to project itself as more concerned about privacy, as all of these discoveries are protected with a feature called Differential Privacy. In essence, Apple argues that you’ll be able to share information with the company without any threat to it being compromised or used by in some nefarious fashion. If this turns out to be as powerful as Google’s machine learning with a stronger guard to your habits, it could be compelling.

BOTTOM LINE: Apple is making privacy part of their storage conversation. If you prize this feature, it's your best bet.