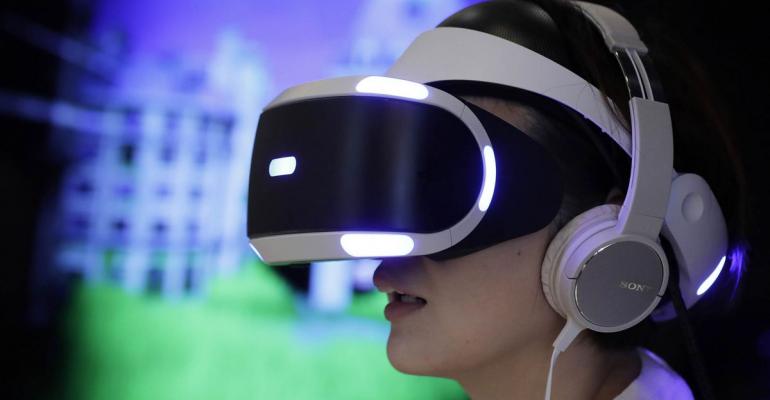 (Bloomberg) -- Sony Corp.'s release of the PlayStation VR on Thursday brings virtual reality to the cusp of mainstream adoption. To make it a must-have home entertainment device, the gadget will need a breakaway hit like Angry Birds or Pokemon Go.

A list of the challenges faced by virtual-reality developers offers hints of what a killer VR app or game might look like. While it could borrow techniques from traditional games, virtual reality's potential becomes clearer at the point where conventional approaches start to fall short.

Consider mobile gaming, which required developers and gamers to think in new ways. The use of touch screens and sensors, short play time and free-to-try business models helped to make smartphone games unique and fueled success in the genre. In the same way, creators are now developing the building blocks for VR.

"These are things that have never been invented before—you can't look them up," said Andy Moore, chief executive officer of Radial Games, one of the developers of Fantastic Contraption, a game that lets users build virtual gizmos.

Whatever the first VR mega hit may be, it will most likely use a motion controller. One of the first things people do in virtual reality is look at their hands. Playing with a regular gamepad would shatter the illusion, and that's why PlayStation VR, Facebook Inc.'s Oculus and HTC Vive all come with controllers that track 3-D hand movements.

Motion controllers are tracked by an outside camera or a sensor to directly translate your movements into VR. See something you want? Reach out and grab it, there's no need to memorize complex button combinations. This ease of use brings virtual reality to a much a broader audience.

"Manipulating objects with your hands in VR brings out a childlike wonder," said Alex Schwartz, CEO of Owlchemy Labs, which developed Job Simulator.

"If you want a volume slider, then put an actual speaker in the world with a physical slider that you can grab with your hand," Moore said. "Don't do menus. Menus suck."

For example, in Fantastic Contraption, where users create virtual machines by connecting engine parts and structures together, the toolbar is a cat. The feline is always nearby, ready to help. Menus also lead to clutter. That's why in the game, magic hats are used to quickly change environments. To quit a level in Job Simulator, take a bite out of an virtual exit burrito. And another bite to confirm.

TO TELEPORT OR NOT

One of the thorniest problems is preventing nausea in virtual environments. Base jumping off a skyscraper or tumbling around in zero-G environment usually don't work well. That's because much of the sense of presence, the feeling of being somewhere else, comes not from what people see, but the their innate sense of balance. There's a technical term for when those senses don't line up: vestibular mismatch.

The challenge has already led to a new technique that's quickly gaining in popularity—teleportation. While it feels as natural as blinking and doesn't cause motion sickness, zooming around enemies and obstacles at will can also undermine the illusion of being in a realistic physical space. Budget Cuts, a stealth game that has you sneaking around an office building, has an elegant solution: you can only teleport as far as you can throw.

"Navigation is just a way to get from point A to B, it's not a game mechanic itself, so why not shortcut it?" said Nicolas Doucet, producer of Playroom VR for Sony's headset. "Do we really need it?"

What's most exciting about VR is that many of these tools and techniques are being invented right now. By solving these problems, developers may be doing more than just laying the groundwork for a Clash of Clans in virtual reality. Facebook's Mark Zuckerberg, for one, believes virtual reality will usher a new era in computing.

"This is the most rewarding work I've ever done," said Moore. "Everything I touch is brand new."