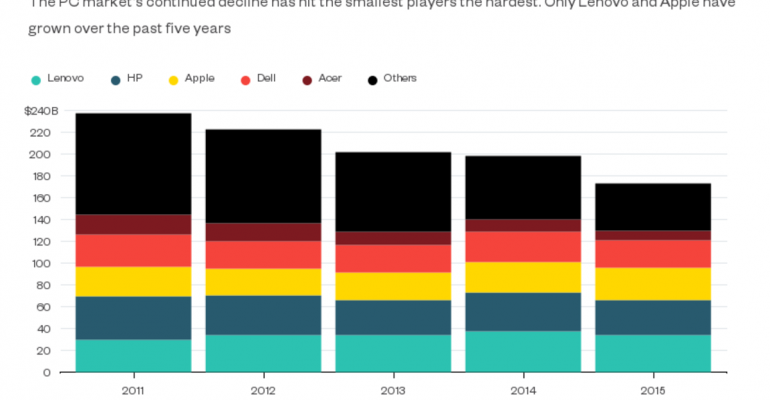 PC Makers Need a Reality Check. A Virtual Reality One

It really is as simple as that. Analysts can slice and dice the numbers to try to explain every twist and turn in the industry's demise, but Occam's Razor applies.

In its press release outlining the latest data, IDC clearly subscribed to the "flat is the new up" theory on market growth by noting that fourth-quarter unit sales fell only 1.5 percent. According to the research provider, the results "continued the recent trend of stabilizing growth."

Something needs to be done. Consolidation among players isn't enough -- they tried that and it didn't stop the inexorable price declines that have always been a part of the electronics hardware business.

So now it's time for something new. Like, say, producing a product people actually want to buy.

Think about the last PC you logged in on. Now compare it to the PC you logged on to 15 years ago. See the difference? Nah, didn't think so. Not since Jony Ive decided that Bondi Blue was a good color for a computer have we seen any real innovation in PC design. The technology inside has barely changed either, merely evolving with faster and more powerful systems, which is thanks to the semiconductor industry, not the PC one.

What PC companies need to do now is take the product they make -- little boxes of computing power -- and turn them toward practical applications consumers actually want.

Virtual reality is the obvious one. VR is resource heavy and time sensitive, requiring both speed and power. But to date, the major VR players are producing headsets and relying on PC makers to fill that computing void. The exceptions here are Sony Corp., which has leveraged its headset-PlayStation combo to lead the market, and Acer Inc., which is focusing on commercial buyers. PC makers either need to do VR themselves, or buy an existing player.

VR isn't the only arena. Home servers are another segment screaming out for a good supplier. This would essentially be a personal cloud server, storing photos and files, streaming content and acting as the hub for a coming wave of automated services. Instead of relying on the likes of Apple Inc. and Google Inc., a home solution would hand control back to consumers and make PC companies relevant again.

Acer has been trying to kick-start the idea with its Build Your Own Cloud initiative but has failed to gain traction. That shouldn't stop others from trying: A few firms took a crack at smartphones and tablets before Apple showed them how it's done.

When analysts describe a declining market in positive terms, you know things are bad. And for PC makers, desperate times call for desperate measures.