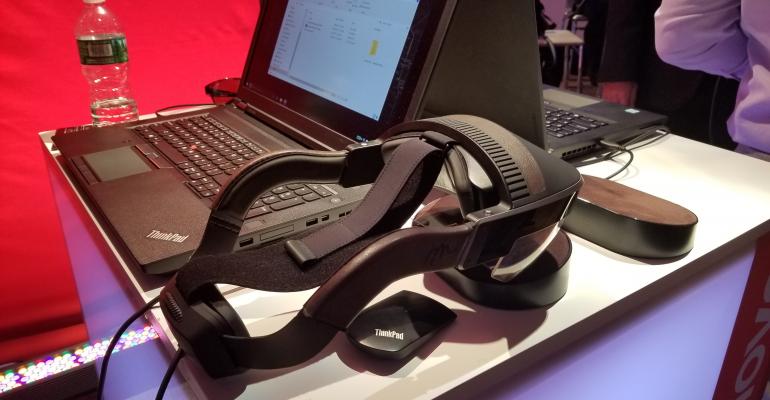 Over the last few years I have had a chance to try out several headsets for augmented and virtual reality in my travels covering Microsoft and other companies.

The first time I tried Hololens at Build 2015 I was not allowed to take any images of the device while I was using it but did get to photograph a model under plexiglass while serious security folks stood nearby. Afterwards, I was able to write about that first time experience.

The following year, at Build 2016, the veil of secrecy and heavy security was much less of an obstacle to trying out HoloLens. We actually got to not only use the device but to also interact with others during a shared augmented reality experience at Microsoft's Holographic Academy. What a difference a year and the demo experience can make on the perception of the device and its capabilities.

I have also had a couple of odd quick side demos of HoloLens at other Microsoft events but did not write about them at length like I did those first two experiences.

Then there is my virtual reality experience over the last few years.

At CES this year I had the opportunity to test out the 3Glasses Blubur S1 VR headset and and during Build 2017, I participated in a 15 minute demo called Datascape using the Acer Head Mounted Device that will be available later this year for Windows 10 and Microsoft's Mixed Reality Portal. I have even tried out Google Cardboard with the LG Nexus 5X  and most recently have begun using the Samsung Gear VR that comes with the Galaxy S8.

While I was up in New York City at Lenovo's Transform event, a decidedly commercial PC and data center driven event, I had the unexpected opportunity to try out an augmented reality headset which I had never heard of until now - the Meta2 - which is built by a company Lenovo has invested in called Meta Vision.

This is the first high end augmented reality headset that I have seen outside of my HoloLens based experiences but there are a few big differences between them:

-- The Meta2 headset costs $949. That is 1/3 of the cost of HoloLens's $3,000 developers edition and 1/5 of the price for the commercial option at $5,000.
-- Meta2 is a tethered device and hands off all the heavy compute processing to the connected PC.
-- Meta2 uses natural hand gestures to interact with holographic images instead of custom hand gestures.

One other key point that the personnel made to me about Meta2 compared to HoloLens was the field of view being larger than that seen in HoloLens.

I tried out the headset with a demo that allowed me to grab and interact with a model of a brain, pull up videos, and browse the web.

It did take some time to adapt to using the natural action of placing my hand on a holographic object and just closing my fingers around it to manipulate it. I will admit, there was some air-tapping going on at first. However, as I got used to the idea of using my hands naturally I was able to easily grab the model of the brain and stretch it, rotate it, and move it around with my hands.

As you will see in the images, the lenses of the Meta2 are angled and my initial tendency was to look down through the lens instead of holding my head upright and looking through it. This small adjustment made the field of view not seem as restrictive as that head down angle was severely impacting it. As I watched others try out the glasses, it seemed to be everyone's tendency to look down at the beginning of their use of Meta2.

I certainly would have liked trying out other immersive experiences but the Meta2 is considered a prototype and therefore had limited options at this event.

As for comfort - I found the Meta2 much more comfortable than headsets that must sit on the bridge of your nose. The HoloLens, Gear VR, and Acer HMD all pinch my nose but the Meta2 with its angled lens does not even have to rest across my nose. I could also wear my glasses without any pressure on them in the headset being in the right position to see well. I was also able to use the Meta2 without my glasses just like I can do with the HoloLens, Gear VR, and Acer HMD.

You can learn more about Meta2 and their vision when it comes to augmented reality by visiting the Meta Vision website and watching their YouTube videos that include testimonials from CEOs and other tech community members from Silicon Valley and elsewhere.

Note: The author ​was provided transportation and accommodations by Lenovo to attend Transform in New York City.