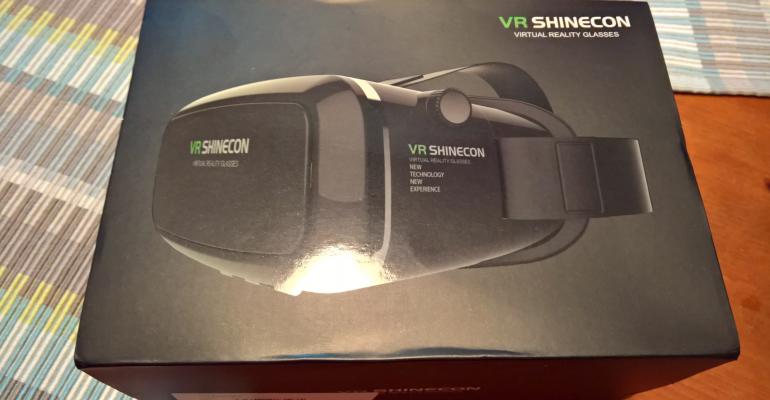 I’m often amazed at how simple an idea can sometimes be vaulted into a legendary (erroneously or not) status.

Such is the case with VR headsets ever since Google delivered its cardboard VR goggles during an event a couple years back. The idea was simple, yet produced some of the best marketing the company could buy – this, after the horrid introduction of Google Glass. It was an ingenious move and even to this day, it’s difficult to replicate the shock and awe of that presentation.

Fast forward to today, and you can obtain VR headsets pretty easily and for almost next to nothing. Google still offers its original design and Google Cardboard has become the official name. The company recently announced that it will make them available to all through its online store for $15 or two for $25.

But, VR: Is it the next CB Radio craze, or just a fad looking for a hobbyist?

I recently had the chance to test VR SHINECON Virtual Reality Headset to get my taste of VR capabilities using set of goggles designed specifically for housing a smartphone to deliver the experience. The VR SHINECON reminds me of the old View-master except it has full-head strap so you can wear it, somewhat comfortably, like old-time mineworkers wore a head-mounted flashlight.

The VR SHINECON touts that it works with Android and Apple smartphones, but it also does work with Windows Phones from my testing. I tested it with both an Android smartphone and my Lumia 950. Of course, there are many more VR apps supporting Android, so that’s was the acme of my experience.

VR is interesting. In my opinion is still very much an infant technology. It’s neat, but not yet a necessity. However, the VR SHINECON does a good job of delivering enough of a test bed to allow anyone to enjoy the technology’s first steps.

The smartphone fits insides the front shield, and the unit offers dials for obtaining a perfect focus like a pair of binoculars. And, just like in the binocular world this is called Pupil Distance and Focal Distance for VR.

The headstrap can be adjusted to give a pretty snug and comfortable fit, but as you can see in the slideshow above it makes you look like a maroon. And, this is the biggest drawback for VR, or even augmented VR like Microsoft’s HoloLens – you simply cannot pull off “cool” and wear a VR headset of any sort. Remember when Sony was trying to sell 3D like it was the next monster, family room experience? It failed because families couldn’t even begin to see themselves all wearing sunglasses (3D glasses) in the house just to watch a movie. The VR headset is a similar avenue.

I have to be honest, through my testing of the VR SHINECON headset, I was afraid of breaking it – afraid I might tighten the dials too far and they’d snap off. The plastic is pretty brittle and reminds me of the plastic used in toys you might buy last second in an airport mercantile.

There are other options if you want a VR headset to play with – some that are probably more sturdy. Of course, the Google Cardboard is probably the cheapest at $15, but again – it’s cardboard. If you want a longer-lasting experience you’ll want to invest in more.

VR, to me, is just hobbyist’s fare. It’s not something I’ll incorporate into my daily workload or even my afterhours entertainment anytime soon. In fact, I’ve had no desire to strap on the VR SHINECON headset since my tests. What will make VR truly interesting in the future is to be able to participate in VR activities with others in the same room. And, I know it’s coming.

The VR SHINECON Virtual Reality Headset is $28.99 from Amazon.com, but you can sift through the other VR headset offerings there if you’re hankering for some alone time.