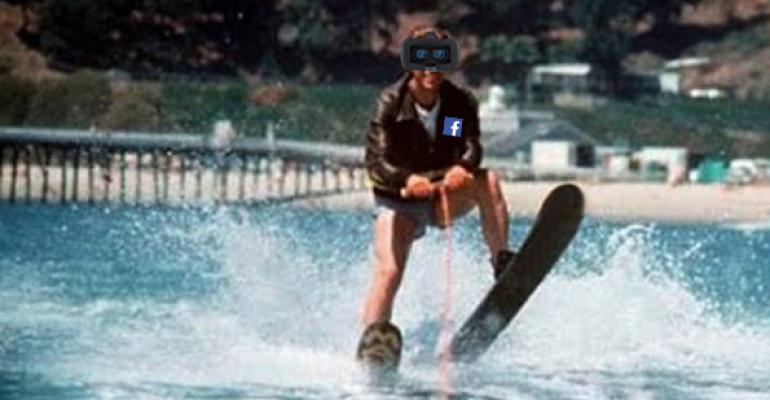 After all, the "like" button IS a thumb's up

In a bizarre move, social networking giant Facebook announced Tuesday that it will purchase virtual reality headset maker Oculus VR for $2 billion in cash and stock. According to Facebook CEO Mark Zuckerberg, virtual reality will succeed mobile computing as the next major era of personal computing.

Related: Facebook in Blockbuster Deal to Acquire WhatsApp for $16 Billion

"Our mission is to make the world more open and connected," Mr. Zuckerberg explains in a blog post. "For the past few years, this has mostly meant building mobile apps that help you share with the people you care about. We have a lot more to do on mobile, but at this point we feel we're in a position where we can start focusing on what platforms will come next to enable even more useful, entertaining and personal experiences."

He described the Oculus VR headset—which is currently a bulky, heavy, and old-fashioned looking piece of equipment—as one that provides "a completely immersive computer-generated environment." "You feel like you're actually present in another place with other people," he says. "People who try it say it's different from anything they've ever experienced in their lives."

I have tried it, and although the effect is interesting, it's more strange than immersive. Furthermore, it's openly targeted at games. This is an area in which Facebook is tangentially connected, but it's hardly a strength.

Related: Facebook Messenger Comes to Windows Phone, Eliminates My Need for Anything Else

But Zuckerberg says that's just fine. "We're going to focus on helping Oculus build out their product and develop partnerships to support more games," he writes. "Oculus will continue operating independently within Facebook to achieve this." Beyond gaming, Facebook will help Oculus expand into interactive experiences like classrooms, doctor consultations and the like.

"Virtual reality was once the dream of science fiction," he concludes. "But the Internet was also once a dream, and so were computers and smartphones. The future is coming and we have a chance to build it together. I can't wait to start working with the whole team at Oculus to bring this future to the world, and to unlock new worlds for all of us."

To put this purchase in perspective, Facebook just spent an astonishing $16 billion to acquire a mobile messaging app called WhatsApp. But that purchase, while heady in scope, at least makes sense within the confines of Facebook's desire to connect the next billion people. (It already has 1.2 billion subscribers to its social network.) Oculus seems a strange and unlikely fit for the company. It also has a much smaller user base, with just 75,000 customers.

And if it seems like this would have been a better fit for Sony or Microsoft—an Oculus Rift accessory for the PlayStation 4 or Xbox One makes some sense—you're not alone. Minecraft creator Markus Persson tweeted that he canceled the deal to port his game to Oculus in the wake of the Facebook acquisition. "Facebook creeps me out," he explained.