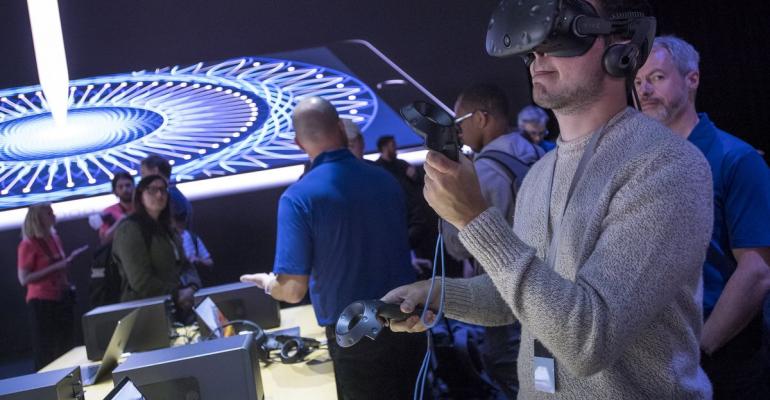 (Bloomberg) -- Apple Inc.’s HomePod speaker made headlines at the company’s annual developer conference. But for thousands of developers at the event, the conversation was abuzz with another topic: augmented reality.

The iPhone maker rolled out new tools called ARKit this week for its 17 million developers to build augmented reality features into their apps. Software chief Craig Federighi showed how the system can place virtual 3-D objects inside the phone camera’s field of view, and highlighted artificial intelligence software for facial recognition, barcode detection and language understanding.

“There’s a lot of stuff that’s being demoed out there by other companies, but here they’re actually providing us with the tools,’’ said Max Goedjen, a software developer for the Walt Disney Co. “That’s really great.’’

Apple has spent more than $1 billion on acquisitions and conducted years of research and development on AI and AR. The Siri virtual assistant has showcased Apple’s AI efforts for years. But Monday’s Worldwide Developers Conference was the first clear demonstration of the company’s work on augmented reality, which superimposes graphics and other information onto a person’s view of the world.

“The area I’m personally excited about is AR,’’ Apple Chief Executive Officer Tim Cook said in an interview with Bloomberg Television. “I think this is profound. As we get the developer release out we’ll be the largest AR platform in the world.’’

If Apple is successful, sales generated by apps with AR may increase the company’s fast-growing and profitable services revenue. That’s not a sure bet though. Despite similar developer support for Apple TV and its Watch, those devices have yet to attract the avalanche of apps to help them become blockbusters like the iPhone.

Alphabet Inc.’s Google got out ahead of Apple in AR. In early 2014 it unveiled Project Tango, a mobile camera system with depth sensors that can plot surroundings in 3-D. At its developer conference in May, Google rolled out new Tango tricks, including an ability to navigate inside retail stores. However, Tango currently only comes in two Android phones, and few other Android devices have the latest operating system to support such AR technology. That makes outside developers less willing to build apps using the technology.

In contrast, most Apple devices have the latest iOS operating system, which means the company’s new AR capabilities will quickly reach millions of real customers -- a much more enticing outcome for developers.

Apple’s ARKit is a boon to Genady Okrain, CEO of Momento, which runs an app for making short video clips known as GIFs. He was surprised how quickly Apple built these developer tools and he’s going to use them to add new functions to his app for identifying objects in an image and creating more customized GIFs.

“The tools Apple has given us will hasten that process and allow it to happen on the phone, not in the cloud,” Okrain said. “That makes life easier for me and my users."

The introduction of the software suggests AR-related hardware improvements in the next iPhone, due later this year, and possibly other gadgets.

Apple typically creates software and other supporting services for developers before launching devices that take advantage of the technology and related ecosystems. "The most important thing to do is to build a really solid foundation," Cook told Bloomberg Television on Monday.

In 2001, Apple showed its interest in music with iTunes. Ten months later, it debuted the iPod. In 2014, Apple announced HealthKit and HomeKit, platforms for third-parties to track health data and support smart home appliances. Almost a year after HealthKit debuted, Apple shipped the Apple Watch. In December, Apple will ship the HomePod, which will use the HomeKit platform.

Now, as its showcasing interest in AR, Apple is working on AR features for the iPhone and a pair of AR glasses, Bloomberg News has reported.

While demonstrating ARKit, Federighi mentioned retailer IKEA, which has an app that lets shoppers use an iPhone to see how furniture might look in their house. It was a subtle nod to Munich-based Metaio GmbH, the original maker of the IKEA app and a company subsequently acquired by Apple in 2015. Metaio’s former chief technology officer Peter Meier now leads an Apple AR team.

“AR has become one of Apple’s largest areas of focus when it comes to innovation,” Piper Jaffray analysts Michael Olson and Yung Kim said. “We expect 3-D sensing and potentially other functionality” on the next iPhone, they wrote.

In AI, Apple for the first time showed how user behavior in one app can influence what information is presented in a different app. Federighi demonstrated how a search in the Safari web browser for trips to Iceland would prompt the Apple News app to show news stories about the island.

“It’s not about a single big thing, it’s more about the inexorable progress that Apple is doing in rebuilding the OS around AI,” said Rodolfo Rosini, CEO of startup Weave.ai. “We are seeing just a tiny scratch of what’s possible.”

Those advances suggest the next iPhone will serve as a launchpad for more advanced apps, which in turn will help Cook achieve his goal of doubling last year’s $24 billion in services revenue over the next four years.