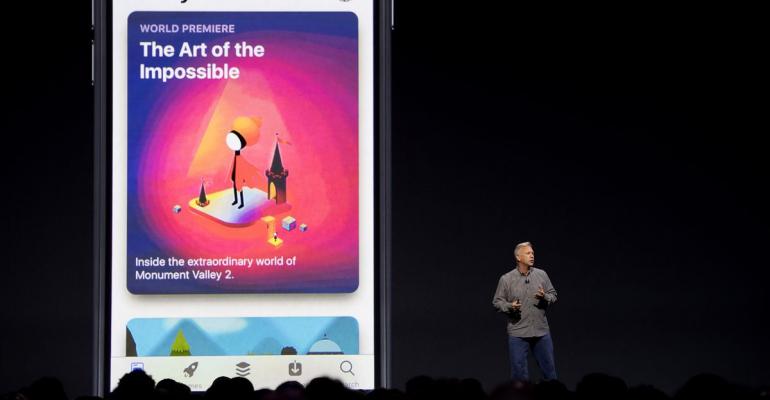 (Bloomberg) -- Apple Inc. took the wraps off new iOS 11, the operating system that will power the next iPhone as well as current and some past iPhone models, previewing new augmented reality features and a redesigned App Store at the company’s annual developers conference.

Updates to the software running Macs, Apple TVs, and Apple Watches were also unveiled, along with more integration of the company’s Siri digital assistant.

Apple has become the world’s most valuable public company by designing phones and other devices that work seamlessly with software. It puts on a Worldwide Developers Conference each year to show outside developers the latest software so they can create new apps and services that make the company’s gadgets more useful.

This year’s WWDC also included new versions of Mac laptops and iPads. But developers, consumers and investors are most excited by the new iPhone, expected later this year. Apple’s tweaks and additions to the iOS 11 operating system that will be running the phone give clues on how the device will turn out. The iPhone still contributes more than 60 percent of Apple revenue.

On Monday, iOS 11 upgrades focused on augmented reality, with a new service called ARKit that helps outside developers integrate this technology into their apps. On stage, Apple software executive Craig Federighi used an iPhone’s camera to project a 3-D rendering of a living room onto a big screen.

Phil Schiller, Apple’s marketing chief, announced a redesigned App Store, getting huge applause from the developers in the crowd. There’s a new "Today" view to show new apps, a space to show off new games, a new tab for non-gaming applications. Each app will also get its own page that developers can customize.

For the Apple Watch, the company introduced new health and music features, plus new watch faces, including one that uses Siri to display pertinent information, like appointments, across the day. Refreshed Apple TV software added Amazon.com Inc.’s Prime Video service as an app.

Apple previewed new features for Mac laptops and desktops, including a new photo managing and editing app, and a new file system that should speed up the devices and improve privacy. The Safari web browser was also updated to block auto-play videos and limit targeting of ads.