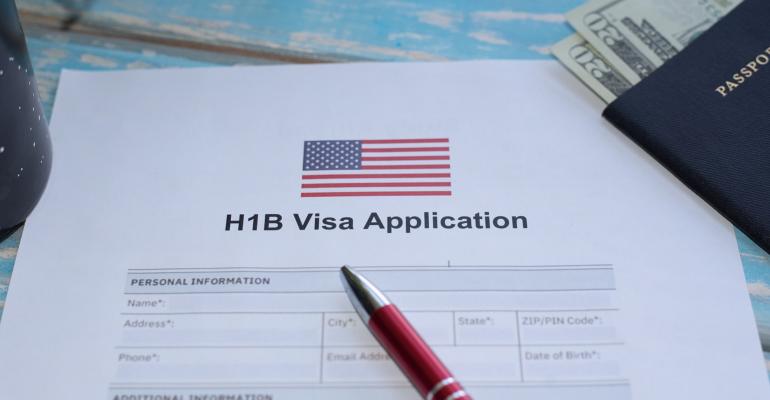 Visa Restrictions Are Threatening US Plans for AI Dominance

The United States wants to lead the world in AI development, but visa restrictions are keeping AI researchers and workers from coming into the country, opening the door for China to rise to No. 1 in AI R&D.

The United States is currently the world’s leading nation for research and development in artificial intelligence. But China has made it clear that the top spot is within its sights, and recent restrictions on the visas often issued to AI researchers and workers coming into the United States put America’s status in jeopardy — and make China’s goal more realistic.

On June 22, President Donald Trump announced an executive order suspending several visa programs for the rest of the year, and perhaps longer. The order extending visa restrictions includes H-1B visas, a primary means by which AI experts come into the United States, and applies to new applicants and visa holders who are currently outside the country.

Google, a major sponsor of H-1B visas, issued a statement extolling the contributions of immigrants without mentioning the order specifically. Apple CEO Tim Cook criticized the decision specifically, calling it disappointing, and Twitter said it was short-sighted and damaging. Andrew Ng, the co-founder of Coursera and himself a former H-1B holder, said it would ruin lives.

The announcement is the latest on immigration from an administration that has bucked international migration trends for years. Restrictions on immigration, including for highly skilled workers, were maintained or tightened while other countries like Canada and the UK decreased theirs and put a specific focus on attracting tech immigrants.

The current dominance of the United States in technology, including artificial intelligence, is possible thanks to the work of immigrants working at the country’s companies and researching at its institutions. The harder it becomes for those experts to work or study in the United States, the more that dominance is threatened. China is at the front of the pack of countries eager to fill the void that America’s retreat on AI would create.

Under Trump, the federal government has indicated a desire to keep the country at the global forefront of AI research and development. In February 2019, Trump signed the American AI Initiative, an executive order meant to boost the AI field in the U.S. through funding allocation and priority setting.

However, critics have pointed out that the order offers little in specifics and nothing in significant funding for AI development. Through the executive order, Trump directed federal agencies to prioritize the funding of AI investments and make government resources and technology available to AI researchers, but didn’t provide the funding to ensure it happens.

China has put more might (and money) behind its own stated intentions for AI R&D. In 2017, the Chinese government released a plan to become the world’s dominant AI power by 2030. The plan calls for investments of tens of billions of dollars into artificial intelligence research and development, with the goal of the country matching the AI prowess of the U.S. and other competing nations by this year and creating breakthroughs of its own by 2025.

There is buy-in on the 2030 plan across China. Companies across sectors are making significant investment into developing AI talent and implementing artificial intelligence in their operations.

The country already has advantages in its well-trained researchers, many of whom are U.S.-educated, and its wealth of data. Now, with the security of knowing it is a priority for Beijing, R&D investment and innovative startups have followed. China’s leading companies are also on board; Baidu created a deep learning lab in 2014, for example, and Tencent’s AI lab has a Seattle outpost.

In contrast, while there is buzz around artificial intelligence in the United States, in many sectors investment isn’t matching it. The country did retake the top spot in AI investment from China in 2018, according to ABI Research, but there are concerns that COVID-19 could reduce that investment as companies shift priorities.

If China maintains its stated course for its AI plans, the economic boost that could come from artificial intelligence has the potential to place China not only in the top international spot for AI, but to make the country the world’s largest economy. If that happens, there will be significant implications for the United States as a whole that reverberate well beyond Silicon Valley.

China’s growing dominance in the field is already on the radar of the U.S. military infrastructure. In May 2018, then-Defense Secretary Jim Mattis pointed to the ambitious plans of China and other countries in a memo to Trump asking him to create a national intelligence strategy. The United States was not keeping pace, Mattis argued, and this was important because defense officials see AI as a game changer for war technology.

It appears that China also sees that potential, as its private companies have been open about working with the military as part of the country’s overall AI strategy. Manufacturing in China has been an economic boon for the country, but the sector’s growth has slowed in recent years — for some, artificial intelligence represents a chance to give the economy another jump-start.

The Pentagon has attempted to create its own public-private partnerships for AI and military technology, and in June 2018 announced the creation of the Joint Artificial Intelligence Center. But those ambitions are somewhat hampered by wariness about that work in Silicon Valley, in particular when it comes to autonomous weaponry. For example, in 2018 workers at both Google and Microsoft protested plans for their companies to work with the Pentagon on AI projects.

Trump’s 2019 executive order also directed the National Institute of Standards and Technology to create standards to foster the development of AI systems and called for a strategy for international cooperation on AI development that is consistent with “American values and interests.”

And the implementation of artificial intelligence into various American industries, companies and institutions requires more than just AI researchers and experts — other types of employees will have to be trained and prepared for how their jobs might change. Those potential changes are the source of some concern for American workers, especially for automation.

Along with other members of his administration, Trump said the latest restrictions on immigration and visas are necessary in order to provide jobs for Americans as the country recovers from the economic impacts of the ongoing COVID-19 pandemic.

Those impacts are real, but in many sectors it is not the case that there is an American willing or able to fill every vacant job. This is the case for jobs in artificial intelligence, where the majority of people working in the U.S. come from other countries — most significantly, India and China.

According to Macro Polo, nearly seven in 10 AI workers at American institutions got their undergraduate degrees outside the country. Two-thirds of graduate students in top AI Ph.D. programs in the United States are international, and 80% of those students stay in the country for five years post-graduation. At least a third of H-1B visa holders have an AI degree, according to CSET.

Even with these international students and workers, there is an AI talent shortage in the United States. The gap between available jobs and workers to fill them appears likely to widen, not only because fewer workers who want to come to the U.S will get visas but also because more of them may choose to try to go elsewhere due to the instability.

They may instead look to countries such as Canada, the UK, Australia and France, where the governments have said AI is a priority and are creating immigration policies to reflect that. For example, tech leaders in Canada reached out online to potential employees after Trump’s executive order was announced and their American counterparts said that the visa restrictions were a boon for their northern neighbors.

We are halfway through the year, and the existing ban on immigrant work visas has been extended through 2020. But because new visas are generally issued in October, the potential effects could last well into 2021. The total number of “lost” workers may end up being small this year; with many embassies closed due to COVID-19, a lot of would-be applicants couldn’t complete the process this year anyway.

But in the long term, the cumulative effects are real and could hit Silicon Valley disproportionately. The loss, from a U.S. perspective, of those workers to countries like Canada isn’t likely to push it, or another other competing nation, into the top tier of countries for AI R&D. But coupled with the concentrated Chinese push on artificial intelligence, the combined effect could be enough to knock the U.S. from the throne.

Microsoft’s Acquisition of Nuance Will Solidify It as a Customer Engagement Platform Leader
May 14, 2021