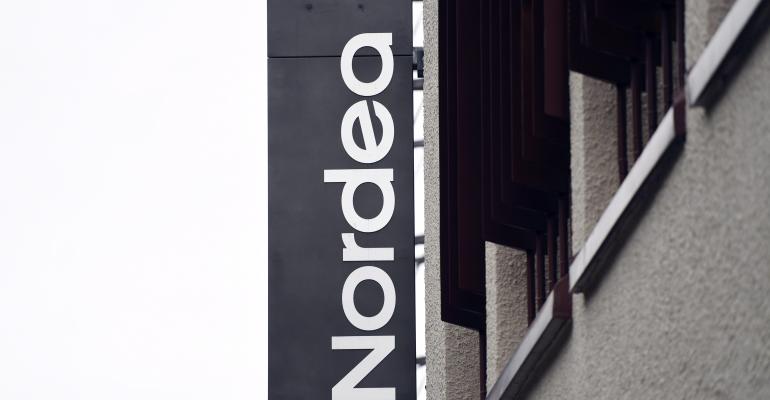 The head of compliance at Danske Bank A/S, Philippe Vollot, also says headcount will probably be scaled back once “technology kicks in.”

(Bloomberg) -- The two biggest Nordic banks have both recently beefed up their compliance units significantly. Both say the extra headcount is temporary.

Nordea Bank Abp has hundreds of employees who scrutinize billions of transactions in order to catch anything that looks potentially criminal. It’s a costly, inefficient system that Mikael Bjertrup, head of the bank’s financial crime prevention unit, plans to change.

Bjertrup says that about 20% of suspicious alerts are currently closed by algorithms, based on machine learning, with the rest still being handled by humans. He wants to see those numbers reversed so that algorithms handle 80%.

“We’ll be fewer people in the future, but our defense will be better,” he said. “We won’t need as many as 1,500 employees in the future, as technology improves.”

The head of compliance at Danske Bank A/S, Philippe Vollot, also says headcount will probably be scaled back once “technology kicks in.”

Compliance has emerged as an area of banking in which the demand for more headcount has so far seemed almost insatiable. The hiring binge at Nordea started in 2015 after it was fined for failing to live up to anti-money laundering requirements. More recently, laundering scandals that engulfed Danske and Swedbank AB have added to pressure on the industry to allocate much bigger resources to fighting financial crime.

With labor accounting for roughly three-quarters of the cost of complying with anti-money laundering requirements, Nordic banks are figuring out how to replace people with artificial intelligence, algorithms and automated customer screening. They say a key frustration now is that the authorities are struggling to keep up, after banks plowed huge amounts of money into their risk controls.

The focus is on finding ways to become more efficient. Bjertrup said his team of about 1,000 people has to wade through the billions of transactions done each year in a process that, for the industry as a whole, is “extremely inefficient.” He also says that “more than 90% of all the investigations end in perfectly good explanations.”

Bjertrup wants banks and authorities to work more closely together and to share more information. He also says banks could fine tune their approach if police told them how many of the reported transactions were actually criminal.

The pressure to respond to recent laundering scandals remains intense. Swedbank, which fired its chief executive officer in March, plans to spend an additional 650 million kronor ($69 million) this year to help fight laundering . (The expense also includes severance pay for former CEO Birgitte Bonnesen.) That follows an eight-fold increase in 2018 in the number of hours spent on anti-money laundering training.

Nordea has been investigated in Denmark for money laundering, though on a smaller scale than Danske and Swedbank. Danske earlier this year said it will hire an additional 600 people to work on compliance and anti-money laundering, bringing the total staff to around 1,800 by January. The Estonian branch of the Copenhagen-based bank may have handled as much as $230 billion in suspicious transactions over nine years.

Vollot started as Danske’s head of compliance late last year. A veteran in the battle against financial crime, Vollot has held similar positions at Deutsche Bank AG and Barclays Plc. He says the process that Danske and other Nordic banks are going through is typical of the cycle.

“Every single bank that I am aware of, and that got into trouble, had to invest massively, build transformation-remediation programs, address weaknesses, and got there slowly but surely,” Vollot said. “It is a very big undertaking for a bank.”

Banks in five of Europe’s biggest financial markets spent more than $85 billion annually on complying with anti-money laundering compliance, according to a 2017 report by LexisNexis Risk Solutions. Just 26% of that was on technology; the rest was labor. (The service provider is updating its figures this year.)

Danske, whose shares have plunged more than 40% since its scandal exploded last year, faces potential fines in the billions of dollars amid criminal investigations across Europe and in the U.S. Moody’s Investors Service estimates European banks have paid $16 billion in fines since 2012.

Vollot has been given free rein to hire, for now. He says experience shows that “you always go through a point where you need actually to add a lot of resources because you don’t have yet the technology to support you.”

But eventually, “technology kicks in and you benefit from proper systems, algorithms, scenarios, case management platforms and ultimately artificial intelligence and robotic,” he said. “And usually this is the phase where you start to reduce the number of people you need.”