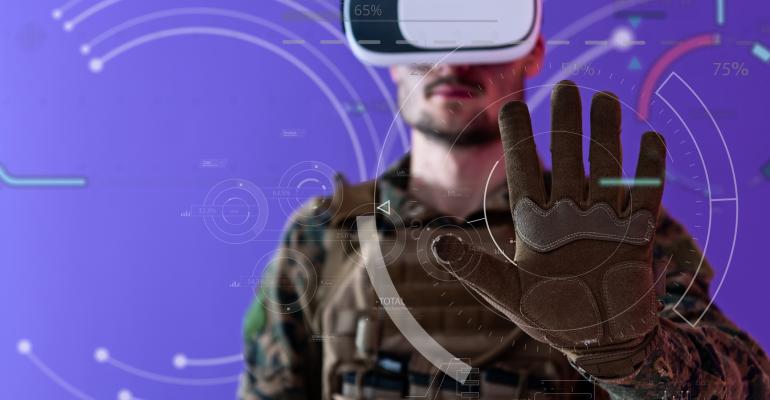 Microsoft Has $1.3 Billion at Stake for Combat Goggles

A test beginning later this month will be evaluated by the Pentagon’s testing office to determine whether the headset is ready for full production and initial deployment.

(Bloomberg) -- Microsoft Corp. has an initial $1.3 billion at stake in a test beginning later this month on whether its HoloLens augmented-reality goggles can be turned into an effective combat system for the U.S. Army.

The monthlong test from May 23 to June 17 will be evaluated by the Pentagon’s testing office to determine whether the headset is ready for full production and initial deployment.

The project by the Redmond, Washington-based company aims to develop a “heads-up display” for U.S. ground forces, similar to those for fighter pilots. The Integrated Visual Augmentation System would let commanders project information onto a visor in front of a soldier’s face and would include features such as night vision.

So far, the Army and the testing office have indicated the goggles show promise but aren’t ready for combat deployment, and the service delayed putting them in the field in favor of this month’s evaluation.

“We’ll be looking carefully at those results to inform, ultimately, where we go” with the program, Army Secretary Christine Wormuth told the Senate Armed Services Committee on Wednesday. “I feel pretty comfortable where that program is,” she said. “We’ve been working very closely with Microsoft, and I think that that program is on track.”

It’s been called a potential $21.9 billion program over 10 years for as many as 121,500 goggles, spare parts, logistics and program management support. In fact, “less than half of this total is possible for the U.S. Army,” Major General Anthony Potts, the service’s program executive officer for soldier systems, told the Pentagon inspector general in the service’s rebuttal to a critical report released last month.

The $21.9 billion represents “a contract ceiling that includes all possible hardware, components, and services over a 10-year period at the worst possible pricing structure,” Potts wrote. He said the full estimate also includes “all possible sales to sister services, Foreign Military Sales and all maximized service contracts.”

At the time a Microsoft official said in an email that the company continues to develop the goggles as a “transformational platform” that will enhance soldier safety and effectiveness, without addressing the questions about the contract’s potential size. Microsoft declined on Thursday to offer further comment.

This month’s crucial test will focus on whether a light infantry unit equipped with the goggles can accomplish its missions in a simulated combat environment, demonstrating “proficiency in soldier lethality tasks while maintaining situational awareness and enabling the commander’s decision-making,” test office spokeswoman Jessica Maxwell said.

Soldiers will be assessed while wearing the device in day and night as they share graphics, information on positions “and the ability to detect and engage targets,” according to the testers. The goggles will be evaluated on whether the field of view and comfort allows for good mobility so that soldiers can accomplish tasks.

Whatever the final program value over the next decade, a positive “Rapid Fielding Report” from the test office could free up at least $1.3 billion in spending that’s on hold or requested, starting with $167 million in unspent fiscal 2021 procurement money and $405 million this year.

There’s also $333 million of a $373 million order placed in March 2021 for the initial 5,000-goggle order; only $40 million has been paid to Microsoft. The Army won’t take delivery until the May test is successfully completed, according to service spokesman Jamal Beck.

There’s an additional $400 million requested in fiscal 2023 procurement funds for a new order for as many as 6,898 sets of goggles.