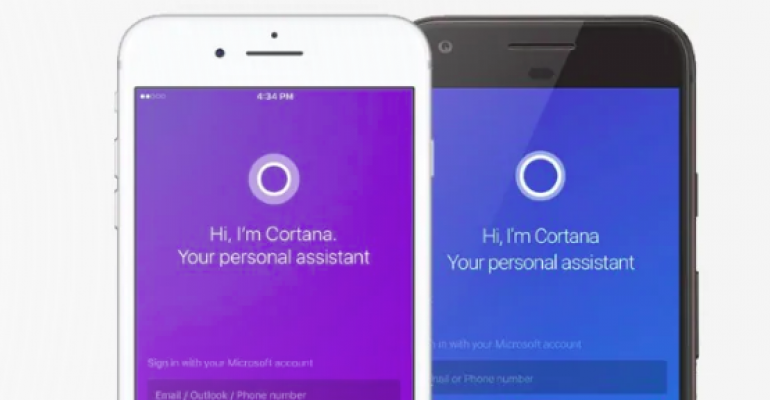 Will Cortana be the Alexa of the office? Microsoft's investment in the use of natural language processing was all over Ignite announcements.

Microsoft is making it clear that natural language processing is a priority for the company--just as it is for its competitors.

Natural language processing is a type of artificial intelligence where the human language is analyzed with the end goal of facilitating human-computer interactions that use natural language--the language used by humans day to day, not the stilted and metallic computer speak of a Johnny 5-esque robot.

Accomplishing this goal involves both natural language understanding--the ability of the computer to understand natural human speech--and natural language generation--the ability of the computer to “speak” naturally. Machine learning is at the heart of this, with computers ideally becoming better at NLP through repeated exposure. And as interest grows in technology like chatbots and digital personal assistants, the mainstream uses of NLP are quickly growing, which has made NLP an area of focused and quick technological development.

Apple (with its Siri) and Amazon (with Alexa) have already staked a considerable claim on the everyday uses of NLP. But at the recent Ignite conference, Microsoft showed that it has come to play, as well, particularly when it comes to the business uses of the technology. There’s certainly room in that market: A recent Pindrop survey found that, security concerns aside, 85 percent of businesses expect to use voice technology in the next year, but only 28 percent currently use voice technology (including Cortana) to communicate with customers.

Updates to Cortana were billed by Microsoft as the start of a journey into a world where voice and natural language are the primary means of interacting with technology.

“In the same way you don’t have to go around teaching people how to use a smartphone because they know how to touch and swipe, we have arrived there with voice," said Javier Soltero, Microsoft corporate vice president in charge of Cortana. "We are finally to, ‘OK, now what can you do?'"

Those Cortana updates included one that allows developers to enable the personal intelligent assistant to complete business-related tasks with the help of natural language processing. Cortana Skills for Enterprise, currently only available by invite, will allow enterprises to use Cortana to do company-specific tasks, making the assistant increasingly customizable.

Microsoft also announced a milestone in text-to-speech synthesis: Neural Text-to-Speech, a system that uses deep neural networks to make the voices of computers nearly indistinguishable for recordings of real people.

Microsoft says the service provides natural prosody and and clear word articulation, which would reduce listening fatigue and represent an aural leap for text-to-speech services. Neural text-to-speech is meant to make chatbots more engaging and natural, and can be used for services like converting digital text to audio in ways that are easier to listen to.

The system, currently available only in private preview through Azure Cognitive Services Speech Services, plays off the momentum of the company’s recent launch of Video Indexer, which uses artificial intelligence to scan audio and video files.

Microsoft Teams will now automatically create transcripts of meetings. It’s a savvy move by Microsoft in the ongoing Teams vs. Slack competition: It already makes sense to use Teams if your office is using other Microsoft products, and this new machine learning-driven functionality will help develop stickiness.