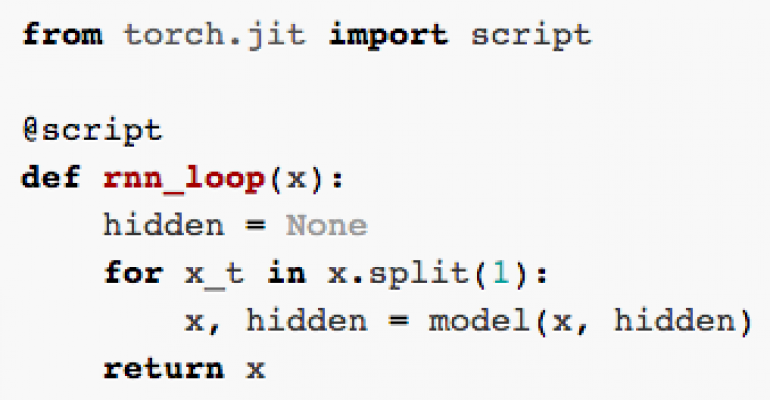 Facebook artificial intelligence is just the tip of the iceberg, as a growing number of big-tech firms are making AI and ML offerings open source or freely available.

Developers can move from research to production in PyTorch 1.0, which brings together PyTorch’s Python-based research tools with the modular production tools of Caffe2, a deep learning framework, and ONNX (Open Network Neural Exchange), an open format for deep learning models.

“PyTorch 1.0 takes the modular, production-oriented capabilities from Caffe2 and ONNX and combines them with PyTorch's existing flexible, research-focused design to provide a fast, seamless path from research prototyping to production deployment for a broad range of AI projects,” Facebook said in its PyTorch announcement.

ONNX also be expanded, Facebook announced, to support new platforms like Apple CoreML. The aim is to provide a format that can move from one framework to another, it was announced.

PyTorch 1.0 will be available in beta--including tools, libraries, pre-trained models and datasets--later this year.

Making the tool available to the general public is also the latest in a series of moves by Facebook to make Facebook artificial intelligence--and AI and ML in general--more accessible in order to fuel innovation in the increasingly hot fields.

“[Facebook has] open-sourced things before, so there is a history,” said Tim Lynch, president of Psychsoftpc, about the tech company, which has been under fire recently because of the Cambridge Analytica scandal. “It is part of their corporate belief.”

PyTorch is already a popular ML tool, with 1.1 million downloads since its launch about a year ago. It was the second-most-often-cited deep learning framework on Arxiv, a research portal, earlier this year. The current iteration is generally used by research teams to train deep learning models.

PyTorch is also flexible, but hampered when it comes to production-scale performance. Because PyTorch is reliant on Python, developers often transfer the research code into Caffe2 to run at production scale--something that currently has to be done manually. Combining the research and production tools into PyTorch 1.0 should remove some of the time delays and errors inherent to that manual transfer process.

“It also helps further AI development and use in Facebook apps, which helps attract more subscribers and, eventually, advertisers,” Lynch said of the move toward open source. There are serious skills shortages in AI and machine learning, so broadening access to tools like PyTorch 1.0 may help more developers get up to speed in the field and keep things moving forward at a good pace.

Facebook is not the only tech giant to take an open source approach to its proprietary AI and ML tools.

“Google has already open sourced some of its AI, as has NVidia,” Lynch said. And the open source tool from Facebook will be integrated into the offerings from other tech companies. Amazon already supports PyTorch 1.0 in Amazon Web Services, and Microsoft plans to in Azure.

And Facebook indicated it will take a similar approach with other AI and ML tools in the future.

Next up for the open source treatment from Facebook will be Translate, a PyTorch language library that can translate 48 languages, and Ensemble Learning Framework, a platform that develops machine learning via gameplay.

Other Facebook libraries and tools -- including Glow, Tensor Comprehensions and Detectron -- have already gone open source.

The PyTorch1.0/Facebook artificial intelligence announcement is one more indication that open source is increasingly the strategic choice for AI and ML, even from the world’s largest tech companies. ONNX, a key part of PyTorch 1.0, began as an open source project between Facebook, Microsoft and Google. And, earlier this year, Google made a machine learning course available for free.

AI and ML are the places to be right now, and open sourcing their tools is one way for companies to accelerate the techs quickly.