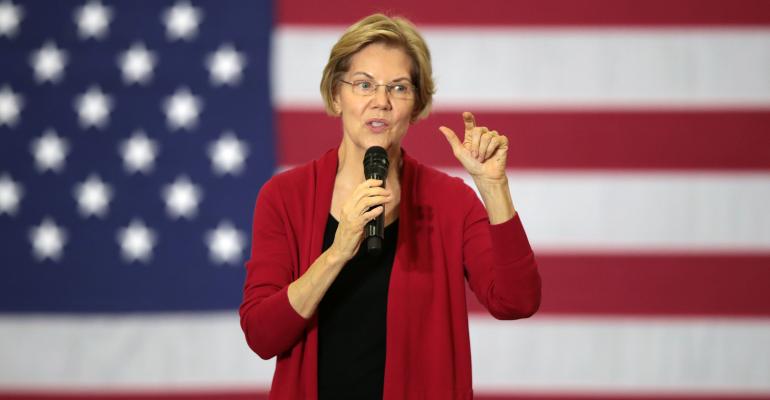 It’s the company’s responsibility to come forward with the information about how that algorithm was designed and the exact impact of it, Warren said. “And if they can’t do it, then they need to pull it down.”

(Bloomberg) -- Presidential candidate Elizabeth Warren blasted Goldman Sachs’s response to claims of bias against women applying for the Apple Card, as complaints reignited a sweeping debate over the role of algorithms in consumer finance.

Goldman, which oversees banking decisions on the popular card, has responded to the flood of criticism by asking aggrieved customers to request a second look at their credit limits.

“Yeah, great. So let’s just tell every woman in America, ‘You might have been discriminated against, on an unknown algorithm, it’s on you to telephone Goldman Sachs and tell them to straighten it out,’” Warren, who’s vying for the Democratic nomination, said in an interview from Concord, New Hampshire. “Sorry guys, that’s not how it works.”

The flashy new partnership between Apple Inc. and Goldman Sachs Group Inc. has been embroiled in controversy in recent days after social media postings fueled by a tech entrepreneur and Apple co-founder Steve Wozniak highlighted unequal treatment in how the card handed out credit lines, sparking a probe by a New York regulator.

The 70-year-old senator from Massachusetts conceived of and helped establish the Consumer Financial Protection Bureau under President Barack Obama and has frequently spoken out on issues tied to access to credit for consumers. Apple and Goldman Sachs are caught up in a growing debate over whether lenders unintentionally discriminate when they use complex models for lending money to Americans. Consumer advocates argue computers can produce biased results even without information on race and gender from credit applicants.

It’s the company’s responsibility to come forward with the information about how that algorithm was designed and the exact impact of it, she said. “And if they can’t do it, then they need to pull it down.”

Ron Wyden, a Democrat from Oregon and ranking member of the Senate Finance Committee, said Wednesday he’s looking into the validity of claims of bias against women in applications for the Apple Card.

“Goldman Sachs has not and will never make decisions based on factors like gender, race, age, sexual orientation or any other legally prohibited factors when determining credit worthiness,” a spokesman for the firm said. “For credit decisions we make, we can identify which factors from an individual’s credit report contribute to the outcome. We welcome a discussion of this topic with policy makers and regulators.”

For banks, ditching the existing system of evaluating individual applicants in favor of a new process is a complicated endeavor. Financial industry regulations can discourage banks from extending loans to people deemed to be less creditworthy.

With the current setup, it’s common for only one individual in a household to reap the benefit of spending and timely pay-down of borrowings. Policy makers point out that this tends to disadvantage women who are part of a joint account.

One reason Goldman became a poster child for the issue is that the Apple Card, unlike offerings from much of the industry, doesn’t let households share accounts. That could lead to family members getting significantly different credit limits. On Wednesday, the firm said it will introduce that option.

The Apple Card is part of a financial system known for its historic inequities, according to Mara Zepeda, one of the founding members of XXcelerate, which helps female entrepreneurs access financing.