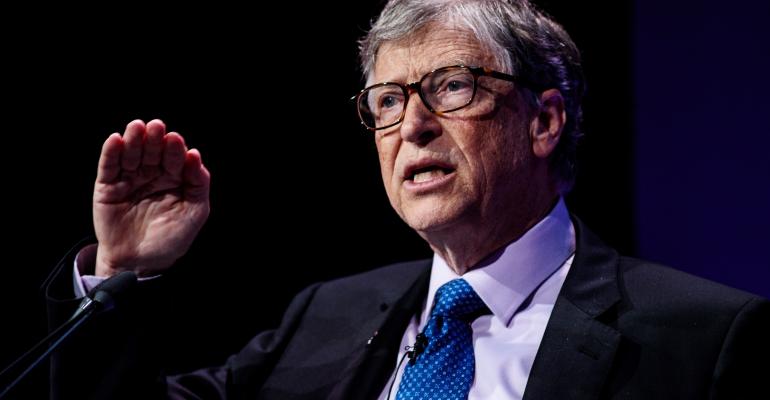 “AI is very hard to put back in the bottle,” Gates said, and “whoever has an open system will get massively ahead” by virtue of being able to integrate more insights from more sources.

(Bloomberg) -- Microsoft Corp. co-founder Bill Gates spoke out against protectionism in technological research around topics like artificial intelligence, arguing that open systems will inevitably win out over closed ones.

In conversation with Bloomberg News editor-in-chief John Micklethwait at the New Economy Forum in Beijing on Thursday, Gates was skeptical about the idea that ongoing U.S.-China trade tensions could ever lead to a bifurcated system of two internets and two mutually exclusive strands of tech research and development. “It just doesn’t work that way,” said the software pioneer.

“AI is very hard to put back in the bottle,” Gates said, and “whoever has an open system will get massively ahead” by virtue of being able to integrate more insights from more sources. Citing Microsoft’s AI research in Beijing, Gates pondered the rhetorical question of whether it was producing Chinese AI or American AI. In the case of Microsoft’s U.K. research campus in Cambridge and the findings it produces, he said that “almost every one of those papers is going to have some Chinese names on it, some European names on it and some Americans’ names on it.”

China and the U.S. are the two leading AI superpowers that have dominated research, however cooling political relations between them have slowed the international collaboration that underpins innovation. Huawei Technologies Co., Beijing’s tech champion, has been subject to a variety of sanctions from Washington, in part because China’s rapid AI development is perceived as a rising threat.

Gates said he was more worried today than five years ago about the rise of nationalist and protectionist political tendencies across the globe, and that he now wonders whether that will prove a cyclical trend or a more permanent change. Still, as far as the U.S. and China were concerned, he said he’s “even more passionate about the value of engagement than ever.”

The other key takeaways from the talk:

The New Economy Forum is being organized by Bloomberg Media Group, a division of Bloomberg LP, the parent company of Bloomberg News.