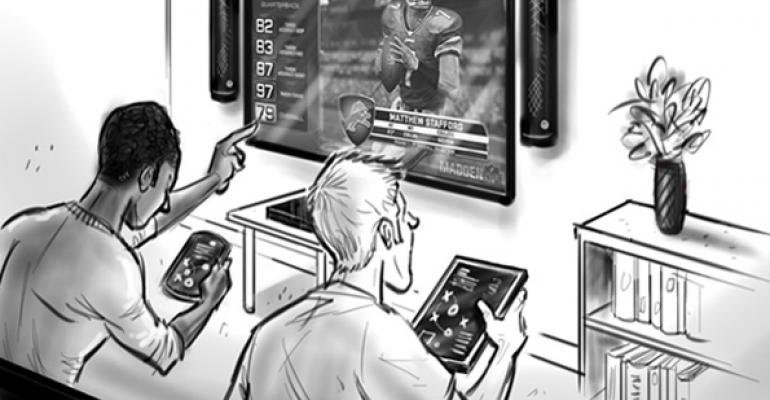 Update: In November 2012, the latest issue of "Xbox World" promised "next-gen Xbox secrets," triggering some excitement in the enthusiast world. But this information was all revealed back in June, as this article demonstrates. Enjoy November's news. Again. :) --Paul

An amazingly plausible 56-page PowerPoint presentation leaked over the weekend, giving what appears to be a comprehensive peek at Microsoft’s next generation Xbox video game console. According to this document, Microsoft will ship the next Xbox in 2013 at a price of $299 and will include an improved version of the Kinect motion sensor and voice control technology.

As amazing, the leaked presentation also includes plans for the following two years of the Xbox roadmap, which includes a potentially interesting follow-up to the Kinect: A set of connected glasses that will offer further immersion capabilities.

Sadly, the leaked presentation has been removed from the Scribd web site at the request of Microsoft’s lawyers. But this act of course speaks to the authenticity of the document, as do many details within the document itself.

On the flipside, the document also refers to the next generation Xbox as the “Xbox 720.” I’ve been told by multiple sources that this name will never be used for this console, either internally as a codename or externally as the product name.

But I’m working on the assumption that this document is real. There’s just too much specific content, much of which maps to information we know to be real. (Be sure to also check out my news article, Massive Leak Reveals the Next Generation Xbox.)

Here’s what we found out.

The next generation Xbox

According to the leaked presentation, the Xbox 360 is “showing its age,” and Microsoft intends to replace it with a new device that will last a full decade. That is particularly impressive when you consider the talk these days about the Xbox 360 and, to a lesser extent, the Sony PlayStation 3, which will have lasted in the market roughly twice the time of their predecessors. But the next generation Xbox will outstrip the Xbox 360 in this regard, by a few years, while selling at roughly the same rate: Microsoft expects the next console—which will be available in a variety of product versions, just like Windows and Office—to sell 100 million units over that 10 years.

Microsoft’s goals for the next generation Xbox are nicely spelled out and speak to general capabilities that simply aren’t possible (or as possible) with the current console:

Next generation games. As I noted in my coverage of this year’s E3, Microsoft’s Xbox 360 is indeed lagging behind the PS3 graphically and in other areas, including its relatively low-capacity DVD drive.

Background DVR. The Xbox 360 cannot form the foundation of a “whole house DVR (digital video recording)” solution because it cannot run in efficient power modes; it’s either on or off. The next Xbox, however, will “record in the background and serve up to any device in the household.”

Power management. Unlike the current Xbox 360, the next gen console is a “sophisticated, silent, always on, [and] green device” that will support multiple power modes, including always-on, media playback, idle, streaming, standby, and other low power modes.

Transmedia. While we’re seeing the beginning of the “transmedia” trend with the Xbox 360 thanks to the Xbox Companion app today and the Xbox SmartGlass app tomorrow, multi-screen gaming—over Windows PCs and devices, Xbox, Windows Phone and other mobile devices, and even the web—will really take off with the next console. You will be able to “enjoy multiple experiences at once, and mix and match based on your needs (e.g. watch football scores with an NFL ticker as you play Gears of War 5).

Web integration. While the Xbox 360 focused on apps, the next generation Xbox will also support online/web content, including synchronized “transmedia” experiences as noted above. Information here is sparse, but when you consider that the 360 is getting an IE 9-based web browser in 2012, it’s not hard to imagine a future console taking this a lot further.

Multitasking. The Xbox 360 cannot multitask: You run one app at a time, and that’s it. The next Xbox will support concurrent apps ands services.

It’s perhaps notable that only some of the points above related directly to video games. Microsoft is clearly moving the next Xbox more firmly into the entertainment space, taking on not just next-gen consoles from Nintendo and Sony but also more general purpose living room set-top boxes like the Apple TV and Google TV, both of which are specifically called out in the presentation.

So what about the hardware?

From a form factor perspective, the next Xbox will resemble stereo equipment and if the drawings in the presentation are accurate, it will look something like this, a gray slab:

There will apparently be a console version, similar to today’s Xbox 360 from a positioning standpoint, and a “STB” (set-top box) version, which may only offer the digital media experiences, but not the games. As with today, the next-generation Xbox experiences will also be made available on Windows-based PCs, slate tablets, and phones. (And there will be a new glasses experience, described below.) The architecture will be licensable so it’s possible that third party Xbox TVs, set-top boxes and other device will appear.

The next Xbox console will feature a (slot-loaded?) Blu-Ray drive, answering one of the big questions around software delivery and whether Microsoft would ever be comfortable shutting out brick and mortar retail stores (Best Buy, GameStop, etc.) from the “event” marketing around game launches. (Apparently, no.)

It will feature native 3D and flexible video output and compositing, including 2 hardware HD video decoders and 1 HD video encoder.

As a video game machine, the next Xbox will be “six times” as powerful as the current console. (That figure is later used to describe the difference in graphics prowess as well.) It’s hardware underpinnings are codenamed “Yukon” and include 2 “ARM/x86” (whatever that means) processor cores running at 2 GHz, a 500 MHz 48ALU graphics processor, 4 GB of RAM, mass flash-based storage, USB 3.0, HDMI, DisplayPort, PCI-E and SATA controllers, and Gigabit Ethernet (with Wake On LAN) and 802.11n networking. A 3.2 GHz PowerPC chipset will be included for backwards compatibility with Xbox 360 games.

The next Xbox will be backed by a new, NextGen interface with Natural User Interface (e.g. Kinect-based) capabilities built-in.

From a software perspective, Microsoft promises 4 to 6 times the number of “AAA” games, the best core content of any console (thanks to exclusives like Halo, Fable, Gears of War, and so on), and unique Kinect game titles.

From a digital media perspective, the new Xbox will let you use your own video content services, will feature HD and 3D video services with a bundled Xbox Video Marketplace, and will of course support Blu-Ray- (and DVD- and CD-) based entertainment as well. There will be a TV App Store for finding new TV services. It can record TV in the background and serve that TV content to to any device in the household. It can stream personal videos, music, photos and more and play them back from any device.

You will also be able to start and play your favorite Xbox games from other devices like phones and PCs using the Xbox Companion/Xbox SmartGlass technologies that are already available and/or announced.

Starting in 2014 or 2015, Microsoft will open up its cloud services to contain users’ music, movies, games, and television content so that they can access that content from anywhere. This will allow a “complete Xbox experience” from any screen at any time, without requiring a hardware upgrade, and it appears to resemble the OnLive video game service. “The cloud serves up full immersion experiences everywhere,” the presentation notes. “The game is all around you in the real world.”

Kinect v2 will be “an incremental improvement” over Kinect V1 (and, presumably, the 1.5 version sold to PC developers today) and will include improved voice recognition, better 3D play space recognition with support for closer, wider, and deeper living room areas, will support the tracking of four players concurrently (up from two) with seated or standing players, will feature dedicated hardware processing (instead of requiring the Xbox’s hardware), and will include a better HD RGB camera.

The new Kinect will have “higher tolerance for variable lighting scenarios” as well, a huge issue with the current device.

“Kinect sees your living room better than ever which means there’s no need to re-arrange furniture,” the presentation notes. “Play seated or standing with your entire family.”

Kinect v2 will also support “props,” accessories you can hold with your hands to make virtual experiences—batting in a baseball game, playing golf, and so on—more realistic. “Feeling is believing,” it says. “Feel the crack of the bat, the kick of the rifle or the shake of the wheel as you speed through the turn.”

In 2014, Microsoft will augment the next Xbox with a glasses accessory that’s codenamed “Fortaleza.” (Fortaleza is a city in Brazil near Natal; Natal was the codename of the original Kinect.) This peripheral will provide a “breakthrough heads-up and hands-free device experience,” and will ship first in a Wi-Fi only version. In 2015, a version supporting mobile broadband (4G) will appear as well. This latter version could work with mobile devices (slates, smart phones), if the small accompanying graphic is accurate.

There’s a lot going on here, of course, but it looks good to me. Hopefully, this is accurate and represents Microsoft’s plans for the future: Xbox 720 is a terrible name, but the platform described in this leaked presentation is quite exciting indeed.