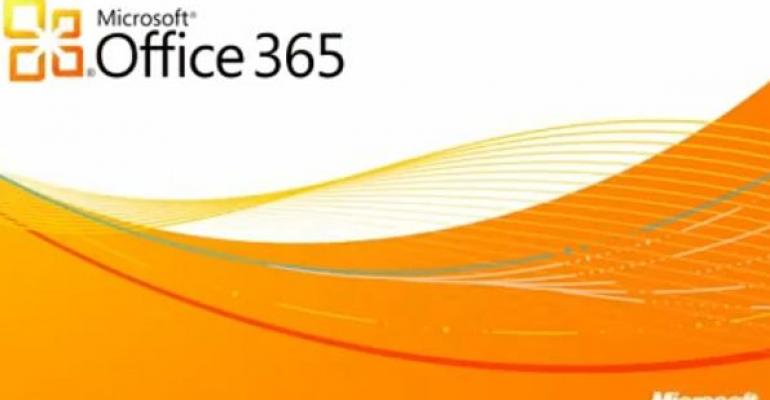 Office 365 for Individuals and Small Businesses

While I've been using Office 365 since the beta program, I recently decided to switch gears and use Microsoft's online productivity service a bit differently. So I've basically started over, with a new domain, and am going through all of the setup steps again. Starting over in this way is interesting, and instructive, so my experiences doing so will form the basis for a new series of articles that approach Office 365 from what I feel is the service's strong suit: Its applicability to small businesses. But I'm also going to take a look at the Office 365 wild card, if you will, it's use by individuals.

What this means to you is that I'm looking at what Microsoft calls Office 365 Plan P1, which is aimed at professionals and small businesses. Costing just $6 per user per month ($72 a year for the math challenged), Plan P1 is pretty impressive, with Exchange Online-based email, calendars and contacts, the Office Web Apps (but tied to your own private domain, not SkyDrive), SharePoint Online-based web site and collaboration features, and Lync Online-based instant messaging (IM) and video chat. It's backed by a three-nines (99.9%) uptime guarantee, according to Microsoft.
For those with larger organizations (25 or more employees) and more advanced IT management needs, Microsoft offers various "E" plans that vary in price from $10 to $27 per user per month. And there is of course an educational version of the service as well.
The differences between these services and the Plan P1 service I'm using and writing about are not subtle. With P1, you don't gain access to the client-installable version of Office 2010 Professional Plus that's part of the higher-end "E" plans (though you can add a considerable monthly per user charge for this access if you'd like). You don't get unlimited email storage, as is again the case with higher-end "E" plans, though P1's 25 GB inbox should be enough for almost anyone. And support is considerably down-tuned: With P1, there's no telephone support at all, and you're expected to direct most support requests through the Office 365 Community web site.
There's more, of course, but the point here is simple: These plans are designed for specific audience segments and are priced and provided with whatever feature-set accordingly. Again, I'm focusing on P1. It's what I'm using, and it's what all Office 365-based individuals and small businesses will use. In fact, it's what the vast majority of today's Office 365 users, generally, are using: In mid-December, Microsoft's Tom Rizzo told me that over 90 percent of customers buying into Office 365 were small businesses with 50 or fewer users. So for most users, Plan P1 is Office 365.
One of the big and obvious complaints about Office 365, of course, is that it costs more than its chief rival, Google Apps. I've voiced this complaint myself, noting that Google Apps does offer free accounts for individuals, also with a custom domain, and that very small businesses (those with up to 10 employees) can likewise use Google Apps for free. (You can compare the Google Apps editions here.) But even when you are paying for Google Apps, the cost is a bit less: $5 per user per month (a savings of $12 per user per year when compared to Office 365) or $50 per user per year (a savings of $22 per user per year).
Mr. Rizzo wasn't impressed by this argument and reminded me that $6 a month is almost nothing. In fact, many people spend that same amount every single day at Starbucks, he noted. "Heck, I spend 12 times that much on my smart phone bill each month," he added. "Office 365 is a fire sale for small businesses. You get Exchange, SharePoint, and Lync Online for next to nothing. And they're gobbling it up."
He's right about that. Microsoft signed up millions of Office 365 customers in its first six months of availability and the service is on track to be Microsoft's fastest-ever $1 billion business. As important, Office 365 is so much better than Google Apps, Rizzo argued, that many Office 365 users are Google defections, people who were previously on Google Apps.
Office 365 does have many benefits over Google Apps, of course. Key among these, I think, is 100 percent compatibility with Microsoft Office and its popular document formats. Once you've pushed an Office document through Google Apps, it's essentially lost in that Google Docs productivity products cannot maintain document fidelity. But this fidelity was a chief requirement of the Office Web Apps, which are part of Office 365 (and also available for free via SkyDrive).
And while this doesn't necessarily mean much to individuals or very small businesses, Office 365 also wins big on compliance, privacy and security.
I could rehash all the benefits of Office 365, but suffice to say I've written a lot about the service in the past. So please do refer to some of my more recent articles about Office 365, including In 2011, Microsoft Began Its Comeback in the Cloud, With Broader Availability, SharePoint Comes of Age, and Office 365 vs. Google Apps: Microsoft Comes Out Firing. For now, what I'd like to focus on is the future. And that involves my plans for Office 365 coverage in this series going forward.
Here's what I'm looking at.
Custom domains. Setting up Office 365 with a custom domain is both necessary and painful. Here's a look at my experiences doing so and some thoughts about choosing the right domain registrar. This isn't necessarily Microsoft's fault, but this is one area of Office 365 that could and should be easier, and since it's one of the first things you'll configure, many will get off to a bad start.
Integration with Windows Small Business Server 2011 Essentials. Thanks to a recently-released add-in for Windows Small Business Server 2011 Essentials, it's possible to integrate your work-based domain with Office 365 and seamlessly combine and manage user accounts from a single management interface.
Using Office 365 as an Individual. Office 365 is obviously aimed squarely at small businesses, but I suspect many individuals will want to use the service as well. Here's what you get by doing so, and what you'll miss when accessing Office 365 by your lonesome.
Subscribing to Office Professional Plus. One of the optional services you can add to Plan P1 is a month-to-month to Office 2010 Professional Plus. Is this powerful and useful Windows client worth the heady price?
Office 365 to go. Office 365 offers seamless and excellent integration with Windows Phone especially and decent Exchange ActiveSync-based capabilities on iPhone and Android. Here's what it's like to use Office 365 on the go.

If you have other Office 365 topics related to individuals and small businesses that you'd like me to examine, please do let me know. In the meantime, I'll get cracking on the articles I've already mapped out and will see you soon in Part 2, Custom Domains.