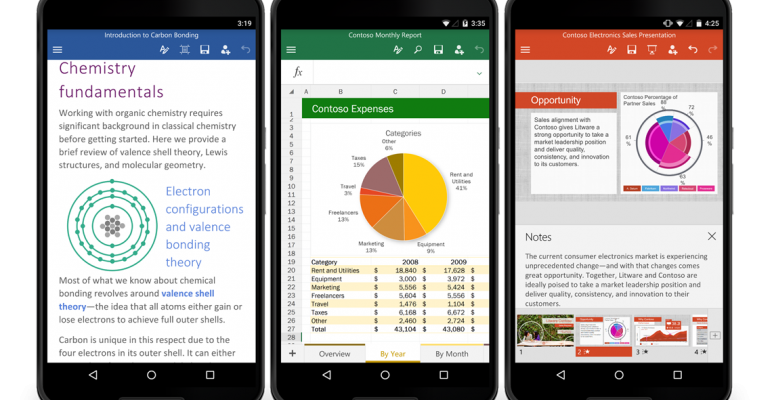 It’s a weird time to be an Office user. In many ways, Microsoft’s productivity suite is better than ever, as the company has enthusiastically embraced the idea that an Office 365 subscription should work on any device you have.

In other words, you don’t need Windows to get a great experience with Office. In fact, lately I’ve spotted a few examples lately of how Office is actually better on Android than Microsoft’s own Windows mobile platform.

So if you’re wondering if you’re not getting the best Office experience because you’re not using Microsoft's platform, fret not. Here are a few ways that you can do a little more with your Office files on Android.

The sharing menu is one place where Android has long excelled over rival mobile platforms. It’s particularly helpful if you want to share an Office file with another user, as you’ll be able to immediately attach it to Outlook, send to another cloud service, or transmit it some other way.

While Office on Windows 10 for mobile has a similarly-themed sharing menu, it doesn’t tap as deeply into the operating system. Android’s sharing menu, particularly in Marshmallow, can suggest a specific contact. It also remembers your most recently used applications and filters those options to the top.

You have a lot more choices for where to send a file with Android’s extendable sharing menu.

But the main advantage for Android is there are just so many more applications you can attach an Office file to. If you want to send it through email, there’s Gmail, Inbox, a number of other third-party applications, and of course Microsoft’s Outlook (you’ll see a friendly reminder that this is the best way to send such a file). You just have more options, and they’re worth taking advantage of.

Microsoft’s best keyboards are on Android

Typing is sometimes a pain on a mobile device. Microsoft clearly knows this, as it recently snapped up SwiftKey and just launched its own Hub keyboard, which plays nicely with your Office 365 account and performs several other tricks like letting you search for files and do instant language translation. The keyboard on Windows is decent enough, but Microsoft’s Garage team is clearly focused on bringing innovative mobile software like this to Android first.

SwiftKey has been the best way to type on mobile for quite a while, and Microsoft’s acquisition means that the company’s language-learning capabilities will only get better. Sure, these features may make their way to Windows eventually (and of course SwiftKey works on iOS) but the most rapid development pace has been on Android, and will likely stay that way for a while. When you’re using an Office document on Android you can’t overstate how important it is that you choose a good keyboard that works for you.

With SwiftKey, you’ll get far more accurate predictions because of how the app learns your typing habits from any mobile device you use it with. And if you’re filling in a spreadsheet or PowerPoint presentation with contact names or need to throw out a phrase in Spanish, the Hub keyboard will be the right partner.

If you’re like me, you probably use many cloud services. There’s that time when you saved that Word document to Dropbox, or maybe even needed to share it with a colleague who uses Google Drive so you dumped it in there.

The “open from” feature that Office uses in Android connects to all such services. Since some like Google Drive don’t have a dedicated app for Windows Phone, you’re kind of stuck without it.  The same thing works in reverse – you can “save to” anywhere, even committing the seemingly sacrilege act of saving a Word file in Google Drive. You probably stick pretty close to one ecosystem, but this extendibility can come in handy.

The future is mobile

I’d be remiss if I didn’t mention some of the things that the mobile version of Windows has going for it.

Microsoft may have stumbled when it comes to a mobile operating system, badly missing the sea change sparked by the rise of iPhone and Android devices. But Microsoft has returned to its software roots and built Office into a service that works well on any platform. My initial thinking when going into this piece was that I would find a lot of features that worked superior on Android than on Windows just because Google’s OS was such a bigger platform.

Word is Word (along with Excel and PowerPoint, for that matter) no matter which device you’re using).

That’s not the case. Feature for feature, they’re practically identical. Formatting, spelling options, fonts, and most of the layout details bear this out. If you’re running a Windows 10 PC you can even try it out yourself – all of the mobile versions of Office are found in the Windows Store (just don’t get confused and open the wrong one when you want to get some work done.)

If you use ink, you’ll need to make sure on Android you view the file through Print Layout, otherwise you won’t see the annotations. The only downside there is you have to pan and zoom to see the text, which makes it a little cumbersome to write or see the small details that you may have added in Word, Excel, or PowerPoint.

Even if you’re a user of a platform built by Google, you can truly get a first-rate Office experience. Microsoft’s cross-platform work is to be commended. With the work Microsoft has done with Continuum, the company might be positioned for the next sea change, when one device might be the only computer you need.